Alonso Cano was one of the most important artists of the Spanish Golden Age, and considered as one of the most significant draftsmen of all times. He was born in Granada in 1601 in a family of artists- his father, Miguel Cano, was a sculptor and altarpiece artist- and in 1614 he moved to Seville to train with Francisco Pacheco. The most significant moment of his life occurs in 1638, when the powerful Count Duque of Olivares appoints him painter of the court. He will remain there, with some interruptions, until 1652, participating in some of the most important artistic projects of the crown. Thereafter, he returns to his home town to carry forth one of his most emblematic works, the cycle of the Life of the Virgin in the cathedral. In 1657 he is obliged to return to Madrid to resolve his problems with the Council of Granada before Phillip IV. He will remain there until 1660, then definitively returning to the city of Granada where he dies seven years later. 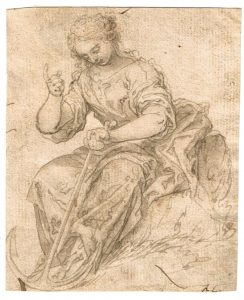