Escalante was born in Cordoba in 1633 where he initially trained, possibly in the studio of Antonio del Castillo. He moved to Madrid in the late 1640s and entered the studio of Francisco Rizi. Through his association with Rizi and his own presence at court Escalante encountered the work of the Venetian painters, particularly Tintoretto and Veronese, from whom he copied their style of composition and graceful poses. In addition to this influence, he made use of Flemish prints, some of which he copied almost exactly, while also looking to Alonso Cano’s elegant models. Escalante was an enormously gifted artist, revealing himself as a consummate draughtsman and as a notable colourist in his paintings. Despite the fact that his career was cut short by his death from tuberculosis in 1669 at the age of thirty-six, he left a corpus of highly imaginative and dynamic works that point to his great potential. 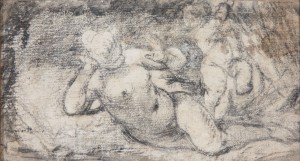