Tibaldi was born in Lombardy in 1527. At the age of twenty he moves to Rome to work as the assistant of Perino del Vaga in various works for Pope Julius III, acquiring in this way first-hand knowledge of the magnificent Roman decorations. In his fresco paintings he will always have the Vatican examples of Raphael and Michelangelo in mind, especially the latter. About 1555 he returns to Bologna to work in the Poggi Palace reaching the peak of his talent as fresco painter. In Ancona he will work at the service of the Ferretti family who helps him come in contact with the cardinal Carlo Borromeo, to become his principal architect. Tibaldi accompanies him to Rome, where he has the opportunity to learn from the recent creations of Michelangelo, and afterwards he will build the Borromeo School of Pavia, his most outstanding architectural work. In 1565 they travel to Milan to be the principal master of the cathedral. After his protector passes away, Tibaldi accepts the proposal of the Spanish monarch Phillip II and will move to El Escorial to substitute Federico Zuccaro for the decoration of the monastery. He will paint canvases and frescos, such as those exhibited in the library or in the cloister of the Evangelists. His style abandons the artificialness present in earlier stages to follow the parameters of immediacy and clarity exhorted by the Counter Reform. In 1596 he returns to Milan to place himself at the service of the archbishop Federico Borromeo, cousin of Carlo, where he dies shortly after. 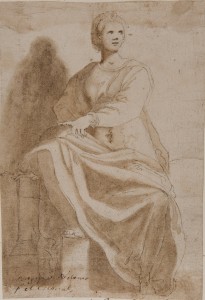