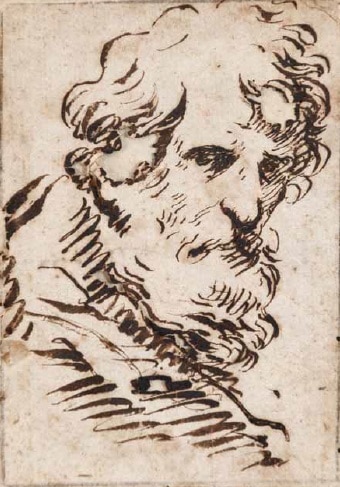 “Francisco Pacecho’s brushes and famous pen make painting, poetry and prose equal./ If Apelles were from Seville,/ and if the planet under which Herrera was born, and being a ray of his same sphere,/ with his arrival and within it,/ where Herrera is the sun, Pacheco is the star.” 1 With these verses Lope de Vega praised the artist Francisco Herrera the Elder in his Laurel de Apolo [Apollo’s laurel wreath], and there is no doubt that, together with Francisco Pacheco, Herrera was the most important artist in early 17th-century Seville. Son of the painter, illuminator and engraver Juan de Herrera y Aguilar, Herrera probably trained in his father’s workshop, although Palomino states that he studied with Pacheco. 2 Whatever the case, it is primarily in the artist’s drawings, characterised above all by their forceful lines, that Herrera reveals his debt to the art of illumination and engraving practised by his father. His sketches, with their clear, broad lines executed with reed pen in dark, grey-brown ink and some use of diluted washes, reveal that training in printmaking as well as the artist’s own dry, acerbic character which led him to become involved in numerous court cases and disputes.

Herrera the Elder’s powerful artistic personality is particularly evident in the numerous heads that he drew with the aim of capturing the uniqueness of human nature, the character of his sitters and their range of movements, appearances, states of mind and different ages. These heads are either combined on a single sheet, as in Six Heads in the Uffizi (inv. no. 10232S), accompanied by other elements such as hands, as in Study of three Hands and the Head of an elderly bearded Man also in that museum (inv. no. 10239S), or depicted individually, as in the present images. Herrera used this repertoire for both the preparation of his paintings and to teach the artists training in his studio, thus giving rise to a type of drawing manual for learning the art of painting. 3 His workshop was extremely celebrated and important in Seville and it is known, for example, that Velázquez entered it at a very young age as an apprentice of Herrera but that after just a few months he was unable to endure the artist’s difficult temperament and he moved to that of his future father-in-law, Francisco Pacheco. 4

The first of these two drawings is the bearded head of a man in half-profile who looks directly at the viewer. His features are defined with lively lines, either unidirectional or zigzagging, executed in a reed pen with sepia iron gall ink. The result of the use of this type of ink, which contains iron, means that in the areas where the pen was more highly charged the paper has torn, resulting in some losses, 5 but this does not prevent a clear reading and an appreciation of the image. The dishevelled, wavy hair and thick beard can be compared to what seems to be the same figure in Head of an Old Man and in Saint John the Evangelist on Patmos in the Uffizi (fig. 1, inv. nos. 100231S and 10291S), 6 as well as the Apostle in the Museo del Prado (fig. 2, D006017). 7 This suggests a repeated study of the same models, either relatives, people from the streets of Seville or workshop members, which allowed Herrera to precisely analyse unique traits of expression and body movement. Given that both the Apostle in the Prado and other drawings from the same series are signed and dated and also reveal the use of a reed pen, 8 the present sheet can be dated to around 1642. In addition, it can be suggested that both this drawing and the one in the Uffizi were preliminary studies for the definition of physical types and characters for that series.

The second face is that of an old man with a thick white beard and abundant hair. His melancholy, self-absorbed gaze and his sad, taciturn expression are perfectly conveyed through the rapid strokes of the reed pen and the use of very diluted grey-brown wash which increases the sense of an enigmatic personality. The use of wash, another resource that Herrera the Elder employed for his sketches, brings this study close to those for the twelve Apostles in the Hamburger Kunsthalle (inv. nos. 38552 to 38563), which are created solely from diluted areas of grey ink of varying intensity. 9 The appearance of one of those Apostles, with thick hair and a dense white beard, is similar to that of the present head (inv. no. 38560), suggesting that it is the same man. However, in Head of an old bearded Man Herrera went further in his experimentation with drawing and made use of the two techniques referred to in relation to the previous sheet and those in Hamburg, combining the powerful use of the reed pen that constructs the figure with washes that define the shadows around the outlines of the face in order to emphasise the whiteness of the beard and the self-absorbed gaze with greater intensity. This combination reveals the artist’s mastery and artistic maturity and allows the present drawing to be dated to the early 1640s, the period when Herrera the Elder received some of his most important commissions and in which his sketches acquire a distinctive character and unique characteristics that make them easily recognisable.