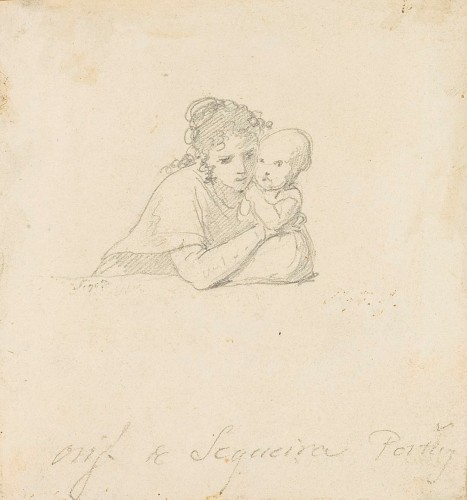 A Mother holding her Child in her Arms

Domingos Antonio de Sequeira was born into a modest family. He received his first training in art as a draughtsman at the Royal College of Drawing and Painting in Lisbon. In 1788 he went to Rome where he was taught by Antonio Cavallucci and Domenico Corvi, who introduced him to Anton Raphael Mengs’s art theories. Sequeira achieved some reputation in Rome and was awarded various second prizes for his drawings. In 1792 this earned him an honorary membership of the Accademia di San Lucca, enabling him to return to Portugal in 1794 with an established reputation. Just a few years later, in 1802, he was made first court painter and from that point onwards executed numerous portraits of the royal family, including the depictions of the Portuguese monarchs Carlota Joaquina and João VI in the Museo de Arte de São Paulo in Brazil (inv. nos. MASP.00228 and 00229).

These are works that perfectly reflect the persistence of the Neo-classical style in late 18th-century portraiture, also evident in the work of artists such as Goya. With the French invasion of Portugal in 1807 Sequeira allied himself with the invaders, painting a portrait of General Junot (Allegory of Junot protecting the City of Lisbon, 1808. Oporto, Museu Nacional de Soares dos Reis), but he soon changed sides and was one of the artists who produced gifts for the English generals fighting to free the country from the French. 1 At the end of the first decade of the new century Sequeira married and started a family, marking a period of personal happiness. During those years he produced a series of works that reveal both this personal satisfaction as well as the use of a more tender and intimate idiom that he used to depict those close to him and which reveals a new Romantic sensibility.

Among these works is the present drawing of A Mother holding her Child in her Arms. The figure of the mother is shown from waist-up, leaning on a surface that is not actually shown and on which the child is sitting. The woman’s face, framed by her dark, curly hair, rests against that of her child, who raises a hand to gently touch her cheek. Executed in pencil with rapid but deft strokes, the immediacy, simplicity of line and intimate character of this drawing has led to the suggestion that it depicts the artist’s wife, Mariana Vitoria Verde, with one of their children, either Domingos or Mariana Benedita. The latter was born in 1812 and Domingos in 1814, dying just two years later in 1816. Of a similar date but much more finished and with the faces defined and elaborated is the artist’s drawing of a Mother and Daughter (c. 1813-14) in the Museu Nacional de Arte Antiga in Lisbon (cat. no. 2840DES). 2 This sheet is also characterised by its intimate, personal mood and reveals the way in which Sequeira placed increasing importance on the expressivity of the sentiments, thus coming close to spirit of the Romantic movement in his work. A similar approach is evident in the two best-known oils of the artist’s family: the unfinished portrait of his children Domingos and Mariana Benedita Vitória de Sequeira, of around 1816 (fig. 1, Museu Nacional de Arte Antiga, Lisbon, inv. no. 1085 Pint), which was probably not completed due to the death of the young Domingos; and the canvas of Mariana Benedita Vitória playing the Spinet of around 1822-23 (fig. 2, Museu Nacional de Arte Antiga, Lisbon, inv. no. 1086 Pint). Executed just before the couple went into exile in France, the latter work again has an intimate, tender mood that brings the viewer close to the sitter. In these portraits Sequeira succeeded in establishing an emotional connection between his family and the viewer, going beyond the sheet of paper or the canvas to introduce us into his world, his feelings and the personality of his loved ones; a notably complex endeavour which the artist achieved in a simple, direct manner. This simplicity is equally evident in the pencil strokes of the present small sheet.