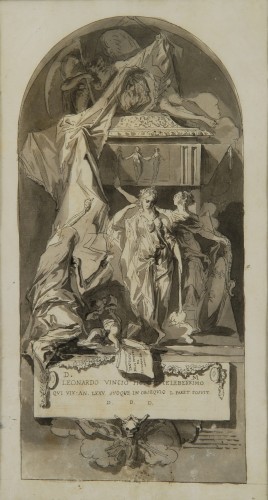 This funerary monument designed by Luis Paret y Alcázar for Leonardo da Vinci, the pre-eminent artist of the Early to High Renaissance and a figure whose renown and influence extended as far as the 18th century, resembles that of a monarch or pope. Paret’s splendid design for an allegorical tomb thus recalls the one created by Francisco Sabatini for the church of Santa Bárbara in Madrid in 1759 to house the remains of Ferdinand VI. It also brings to mind the sumptuous papal mausoleums designed by Bernini and Algardi for San Peter’s in Rome. Above all, it can be directly related to the designs by Paret’s master Charles François de La Traverse (1726-1787) for the funerary monument to the Marquis d’Ossun, particularly the drawing entitled Allegory of Death (c. 1763. New York, private collection).

The present drawing is executed in pen with light, graduated sepia washes with which Paret creates the light and shade and gives the figures a sense of volume. The design takes the form of a niche in which the figures are located in a pyramidal form. At the top is Chronos, god of Time, who holds a medallion bearing the face of Leonardo. Assisted by the figure of Death at the bottom of the pyramid, Chronos raises the lid of the artist’s sarcophagus. On its front face is a relief of the Three Graces, who symbolised true friendship according to Ripa. That author also noted that “whoever receives a grace or favour, remembering it always, must return that Grace to his benefactor twice over.” The Three Graces are linked in an embrace, given that, for Ripa, “one favour results in another, and because friends must constantly undertake all types of Graces and Favours.” 2 From a formal viewpoint, the Graces seem to be derived from Raphael’s celebrated image (1504. Chantilly, Musée Condé) that was disseminated through engraved versions by Marcantonio Raimondi and Enea Vico.

Beneath the tomb are three figures. On the left is Death, who assists Chronos to lift the lid of the sarcophagus and at whose feet is a weeping putto. In the centre foreground is a female figure extinguishing a lighted torch. This figure could be interpreted in various ways given that figures with smoking torches had been interpreted as references to death since the Roman period. However, as Death is already present in this drawing another meaning should be considered and this figure can possibly be identified as Knowledge. Ripa describes her as a woman with a lighted torch, commenting on this element that: “just as light is essential for our bodily eyes for seeing, in order to achieve knowledge […] our internal eye, in other words the intellect, needs to make use of sight, symbolised through the light of the torch.” 3 The reference here is thus to the symbolic end of Knowledge resulting from Leonardo’s death. Finally, on the right, a female figure touches the artist’s tomb with one hand while supporting with the other the French coat-of-arms, referring to the royal house that offered support and protection to Leonardo in the last years of his life. This was also the coat-of-arms of the Spanish Bourbon dynasty, a fact that might suggest a double meaning for this figure: in other words, just as Leonardo was protected by François I of France, Luis Paret indicates that he is once again enjoying the favour of Charles III following the artist’s period of exile in Puerto Rico between 1775 and 1778. 4 Hence the allegorical figure rests her hand directly on the relief of the Three Graces.

All the figures are located on a podium or pedestal that has a Latin text in praise of Leonardo. The initials D.O.M. refer to the phrase “Deo Optimo Maximo”, which was originally applied to Jupiter but which from the Renaissance onwards was frequently used in churches, in particular for inscriptions on tombs. Beneath it is the memorial inscription: leonardo vincio pictor celeberrimo / qvi vix · an · lxxv · svoqve in obsequio l. paret posvit which can be translated as “For Leonardo da Vinci, most celebrated painter who lived to the age of 75, to whose memory Luis Paret raised [this monument].” Finally, the initials D.D.D. refer to the Latin phrase “Dono Dedit Dedicavit”, in other words “[Luis Paret] made it, gave it and dedicated it.” It is now known that Leonardo lived to be sixty-seven (1452-1519) but during the early modern age he was thought to have lived to be seventy-five as all historians based themselves on Vasari’s biography in the third part of the Lives (Florence, 1550) in which that author states that “Spirò in braccio a quel Re [François I], nella eta sua d’anni LXXV. 5 It would therefore seem that Paret made use of Vasari’s biography, as he also did for the eulogy on this monument, which reflects the one reproduced at the end of Vasari’s biography of Leonardo. 6

Protruding from the upper part of the epigraph is a parchment on which is written TRATTATO / DELLA / PITTVRA DA / LIONARDO / DA VINCI. It is this phrase that gives the present drawing its meaning, given that Paret’s drawing was created as an illustration for an edition of Leonardo’s celebrated Treatise on Painting. On Leonardo’s death in 1519 his writings were dispersed and it was not until 1550 that his pupil Francesco Melzi compiled the corpus of documents known as the Treatise on Painting (Codex Urbinas 1270. Biblioteca Vaticana). This compilation remained in manuscript form until it was published in 1651 by Raphael Trichet Du Fresne at the Imprimerie royale in Paris. 7 That edition includes a portrait of Leonardo that is directly derived from the print in the 1568 edition of Vasari’s Lives. It is clear that Paret was familiar with Du Fresne’s volume for two reasons, firstly because the text on the parchment in the present drawing exactly reproduces the title of the French edition in which the artist is referred to as Lionardo, not Leonardo, and secondly because the portrait of Leonardo that Paret includes in his drawing is identical to the one in Du Fresne’s edition, including the garland that surrounds it. 8

In addition to his status as an eminent painter, Luis Paret was celebrated for his erudition. As Ceán Bermúdez noted: “given that he had studied Latin with great benefit, he easily learned oriental and other living languages that enabled him to acquire a complete knowledge of history and other sciences and arts conducive to painting.” 9 Among the texts that Paret translated was Lucian’s Dialogues, while his official position at the Academia de San Fernando in Madrid meant that he was involved in the translation and publication of major texts such as Vignola’s treatise on architecture and Francisco de Holanda’s on painting. 10 Leonardo’s Treatise first appeared in Spanish in 1784, edited by Diego Antonio Rejón de Silva and published by the Imprenta Real [Royal Printing House]. 11 The illustrations were designed by Juan Barcelón and José del Castillo and once again included the portrait of Leonardo derived from the Du Fresne edition of 1651. 12 It is thus possible that Paret produced this drawing for the Spanish edition of the Treatise, a hypothesis that would give further significance to the presence of the figure on the right supporting the coat-of-arms with the fleurs-de-lis, which could be associated with the patronage of this project by the Imprenta Real. If this was the case, it is not known why Paret’s design was rejected in favour of an Allegory of Minerva and Painting by José del Castillo.

Given its funerary character, the present drawing can be related to another by Paret for a Funerary Monument in the Biblioteca Nacional, Madrid (inv. no. DIB/14/47/19) 13 and with one for a Funerary Trophy in the Museo Nacional de Arte de Cataluña (inv. no. 66040). 14 It can also be related to a drawing by Paret intended as a book illustration and entitled The Eclogue (Madrid, Museo Nacional del Prado, D-3528), which is dated 1784 and is thus from the same period as the present sheet. The Eclogue would seem to be the design for a frontispiece for an unpublished or now unknown book. 15 Finally, the present sheet can be associated with two other drawings by Paret, Offering to Diana and The Sacrifice of Iphigenia (Madrid, Museo Nacional del Prado, D-3759 and D-3526, respectively). They are comparable to the present drawing both with regard to the technique, with the masterly handling of the pen and wash, and the figure types, which have a similar classical elegance that reflects Paret’s training with Charles de La Traverse.

[4] Paret was exiled to Puerto Rico due to his association with the “licentious” behaviour of the Infante Don Luis to whom he was Court Painter. By 1784 Paret had returned from exile and two years later began to work for the King on the production of view paintings of the ports of northern Spain. For Paret’s biography see the comprehensive study by Delgado, Osiris, Luis Paret y Alcázar. Pintor español. Madrid, Universidad de Puerto Rico, Instituto Diego Velázquez CSIC, Universidad de Madrid, 1957. References to the Spanish royal house and to Paret’s exile have been detected in other works by the artist including The Apparition of Saint Michael to Charles VIII of France and to Saint Francis of Paula (Madrid, private collection), and The Prudence of Diogenes (Academia de San Fernando, Madrid). See Luis Paret y Alcázar. 1746-1799. Exhibition catalogue, Vitoria, Servicio Central de Publicaciones del Gobierno Vasco, 1991, pp. 208-209, cat. no. 11.

[8] Du Fresne reused Vasari’s print in which Leonardo looks to the viewer’s right but in his edition the image is in reverse. If Paret had taken the image directly from Vasari it would have appeared in the original direction.