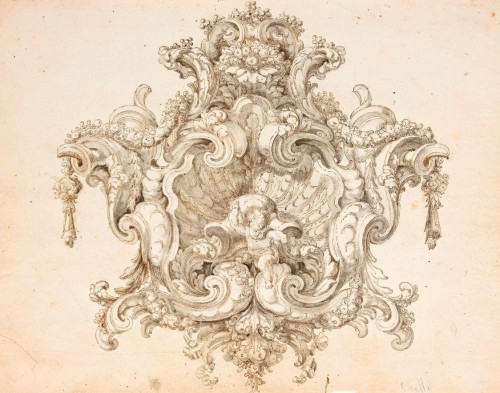 Shells, rocaille work, fleshy, twisted acanthus leaves, garlands of fruit and flowers, ribbons and putti are natural and man-made elements that perfectly combine in this image to create a decorative motif brimming with life, curves and motifs that attract the gaze in a horror vacui. Judiciously executed with sinuous lines of ink and grey washes applied with infinite nuances and gradations, the volumetric nature of this drawing, which is almost three-dimensional and seems as if it could be touched, indicate that it was created to enhance a sculptural object. This piling-up of decorative forms first emerged in Spain in the last decade of the 17th century when the French style began to take hold at the Spanish court. Among the artists who proved most able to incorporate these foreign stylistic innovations was José Benito de Churriguera. A notable architect, urban designer, altarpiece designer and sculptor, Churriguera’s interest in an abundance of decorative motifs in his works has led this type of rich and complex Baroque mode to be termed “Churrigueresque”. Although the term was first used in a negative sense by the Neo-classicists, who considered Churriguera’s art to be excessive or tasteless, 1 it in fact defines a period of splendour in Hispanic Baroque art and a form of artistic expression that was unique in Europe.

José Benito de Churriguera belonged to a large family of artists, of which he was the most outstanding. He trained with his father and his adoptive grandfather. His fortunes changed when in 1689 he won the competition to design and execute the tomb of Queen María Luisa de Orleans, for which he competed against fourteen prestigious architects and painters. 2 Just a year later, Charles II appointed him one of his court architects. Churriguera not only worked for the King but also received numerous commissions in other provinces of Spain thanks to his contacts at court. These include the altarpiece for the chapel of the Sagrario in Segovia cathedral (1689-90) and the one for the monastery of San Esteban in Salamanca (1692), which fully established the artist’s reputation both at court and beyond. For that project he worked with Claudio Coello, one of the unsuccessful competitors in the competition for the tomb of María Luisa de Orleans, who was now commissioned to paint the large-scale canvas as the principal work for the altar, to depict The Martyrdom of Saint Stephen. 3 Churriguera produced an altarpiece of colossal dimensions which occupied the entire space behind the high altar, articulating through a skilled interplay of convex volumes that create different planes of depth. These are in turn emphasised by the contrasts of light and shadow created by the carved sculpture installed across the entire surface of the altarpiece and which becomes its principal feature, albeit without overshadowing the architectural framework and the six Solomonic columns that articulate the principal structure. For the first time, the foliate cartouches, garlands, clusters of leaves, florets, small angels and other motifs acquire an importance here which would become increasingly notable in Churriguera’s work. Some of the altarpiece’s decorative elements, such as the pedestals of the niches for the sculptures or the crowning elements of its lateral doors, include the presence of shells, twisted acanthus leaves, garlands of flowers and putti which combine together to create extremely striking elements. These motifs can be associated with the present drawing, although there are compositional differences that could be attributed to the difficulty of sculpting a design of this complexity. In addition, the possible relationship between this sketch and the altarpiece for Salamanca may explain the presence of Coello’s name at the bottom as this sheet could have been part of the documentation of the altarpiece in which the royal painter played an important role, leading to a confusion in its attribution. 4

Other surviving examples of drawings by Churriguera are similar in type and style to the present work due to their exuberant, decorative nature, their use of voluptuous forms and the presence of shells and fleshy acanthus leaves. One example is the Cartouche in the Biblioteca Nacional (fig. 1, sign. DIB/15/10/8) 5 which has been referred to in this context due to its affinity with the engraving by Matías de Irala based on a drawing by Churriguera of an Allegory of Philip V (fig. 2, Biblioteca Nacional, sign. INVENT/12922). 6 The similarities between that drawing, its related print and the present work, all of which have elements in common, such as the ribbons at the bottom of the design in both the print and the present drawing, make it possible to attribute this work to José Benito de Churriguera.