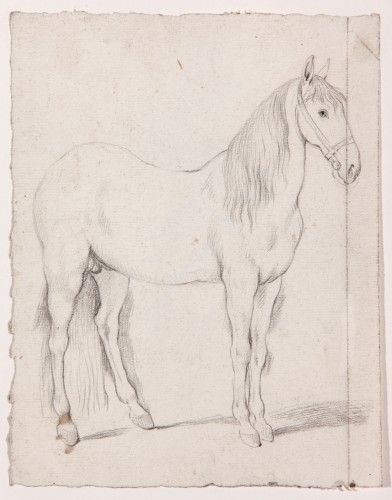 Antonio Carnicero was born in Salamanca on 10 January 1748. A painter, draughtsman and engraver, he belonged to a family of illustrious 18th-century Spanish artists. His father, Alejandro Carnicero (1693-1756) and his brother Gregorio (no dates known) were employed as sculptors at the new Royal Palace in Madrid. His brother Isidro (1736-1814) was also a painter and sculptor and was awarded a government grant in Rome in 1760 to make copies of classical sculptures. In 1749 the family moved to Court in order to work for the monarchy on the sculptural decoration of the Royal Palace. Carnicero trained as an artist within the family circle. His father died in 1756 when he was only eight years old and his education was entrusted to his brothers, who would second his entry as a student into the Real Academia de Bellas Artes de San Fernando in 1758. Two years later Carnicero moved to Rome with his brother Isidro, where he remained for six years.

There he received the standard training for grant students, perfecting his drawing technique and focusing on the copy of classical sculptures and the works of the great painters of the past.

In 1766 Carnicero returned to Madrid and embarked on his studies at the Academia de San Fernando, winning several prizes that led to a commission in 1769 for six large paintings on the life of Saint Francis of Assisi for the Basilica of San Francisco el Grande (in situ). In 1755 he was involved, under the direction of José del Castillo (1737-1793), in the execution of cartoons for tapestries for the Cabinet of the Princess of Asturias in the royal palace of El Pardo. From 1781 onwards Carnicero also produced various paintings for the series of panoramic views of ports, roads, bays, islands and shipyards in Spain. The series was commissioned by Charles III from Mariano Ramón Sánchez (1740-1822) for the rooms of the library of the Prince of Asturias in the Royal Palace in Madrid. In 1788 Carnicero was made an Academician of the San Fernando Academy and in 1796 he was appointed Court Painter to Charles IV. From that date onwards he executed a large number of portraits of members of the royal family, either in the form of canvases or prints for the Kalendarios y Guías de forasteros.

These two drawings are preparatory studies for the plates illustrating the Practices of Horsemanship. In 1769 Louis-Charles Mercier Dupaty de Clam published in Paris the Pratique de l’equitation, ou l’art de l’equitation réduit en principes. Charles IV made notes and comments on the manuscript, as did Manuel Godoy, who commissioned its translation into Spanish from Francisco Cerdá y Rico in 1796. The text was expanded with the inclusion of the texts on horsemanship by Mottin de la Balme and the Baron de Bohan. 2 Two richly illustrated editions were prepared. For the first, in folio format and entitled Real Picadero [Royal Riding School], preparatory drawings for the plates were commissioned from Antonio Carnicero, who produced thirteen illustrations between 1797 and 1801. They depict the standard positions of the horse in equitation, while the riders were members of the royal family and Godoy. Thus we see Charles IV, don Luis de Borbón, Prince of Parma, and the Prince of Asturias.

A number of Carnicero’s preparatory drawings for these plates survive. Most are in the Calcografía Nacional in Madrid and are the final designs for the prints prior to engraving. Another three, less highly finished, were in the Casa-Torres Collection and were exhibited on the Madrid art market in 2006. 3 The present two sheets, also from the Casa-Torres Collection, are of enormous interest as they are very precise studies of the horses, suggesting that they were drawn from life from the animals in the Real Picadero [royal riding school] in Aranjuez. The first drawing, executed in black chalk on paper, is a study for the plate entitled Parade. Portrait of Manuel Godoy, engraved around 1800 by Manuel Salvador Carmona. It constitutes a highly detailed anatomical study of the horse, as well as of the light and shade. The sheet can be related to another on the same subject that was included in the 2006 exhibition in Madrid. 4 That drawing, however, is more schematic, with slight modifications and includes the figure of the rider, Manuel Godoy.

The second sheet, also in black chalk with touches of lead white, is a preparatory study for the plate Slow Trot. Portrait of Fernando, Prince of Asturias, engraved by Joaquín Ballester in 1797. In contrast to the first sheet, Carnicero has here focused on the horse’s body, carefully creating the light and shade with black chalk and lead white but only lightly sketching in the head with a few lines of graphite. There is a preparatory drawing for this print in the Calcografía Nacional that represents the final state prior to engraving. It includes the architectural setting of the scene and the two figures that accompany the Prince, one of whom is Benito de Aguirre, Master of the Horse.