Juan Cano de Arévalo was born in 1656 and soon moved to Madrid where he became a pupil of Francisco Camilo. From the outset he proved outstanding as a miniaturist, ability that led him to focus on painting fans, a field in which he became particularly noted. The fame that he earned for the beauty and skill of his works led to his appointment as “fan painter” to Queen María Luisa de Orleans. While Cano de Arévalo primarily focused on this field he also executed oil paintings and murals, in particular collaborating with Juan Vicente Ribera on the paintings for the Chapel of the Holy Forms in the Jesuit Seminary in Alcalá de Henares. He also painted the presbytery and aisles of the parish church of Santa María in the same city. Finally, and working on his own, he executed the mural paintings in tempera for the chapel of the Virgin of the Rosary in the church at Valdemoro, but these works are almost lost today. A number of drawings by the artist have survived. Cano de Arévalo died in Madrid in 1696 at the early age of forty after taking part in a dual. 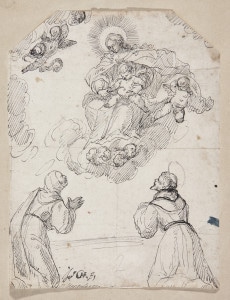 Our Lady of Mercy with Franciscan Saints