The exact date of birth of the Madrid painter Juan Montero de Rojas is unknown but it must have been around 1613. He first trained in the studio of Pedro de las Cuevas where he coincided with Francisco Camilo, Antonio Pereda and Juan Carreño de Miranda. At an unknown date he left for Italy to broaden his studies. There he gained first-hand knowledge of the prevailing classicism of the day as well as of the work of Caravaggio’s followers. It is not known when Montero de Rojas returned to Madrid as the first documentary references date from 1664 when his name appears in the will of Francisco Camilo. In 1673 after the death of Camilo his name again appears as an executor. Over the following years Montero de Rojas’s name reappears in disputes in which he supports the noble status of painting. Little more is known of the artist’s life other than that he died in Madrid in 1683. Few works by Montero de Rojas have survived to the present day. While the earliest ones reveal the influence of Caravaggesque naturalism as interpreted by Ribera. his last works show the artist’s evolution towards a high Baroque style. 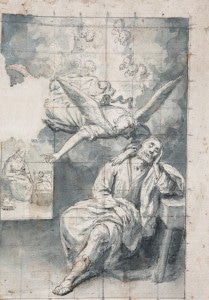 The Dream of Saint Joseph