Luca Cambiaso was born in Liguria in 1527 and trained with his father, also a painter. His earlier works are characterized by the exuberant treatment of space and figures in direct relation to the works of Michelangelo, Beccafumi and Raphael. He has a very close relationship with Castello, named Bergamasco, and both friends work together in many projects. The period between 1555 and 1570 can most certainly be considered as the best of Cambiaso´s work, with an increase of oil paintings production reaching the pinnacle of his art. The artist´s other production is the nocturnes, proving to be the true visionary of later aesthetics styles, and in particular, of Caravaggism. From the beginning of the decade of 1570, coinciding with acute family problems such as his wife´s death, his style becomes heavier and in some way solemn and grandiose. His last years are dedicated to the commissions received by the monarch Phillip II in the monastery of San Lorenzo of El Escorial. 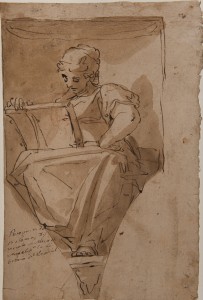