Castellano was born in Madrid in 1826 and studied at the Escuela de Bellas Artes de San Fernando where he was taught by Juan Antonio and Carlos Luis de Ribera, from whom he learned academic drawing. He also worked as an assistant for the latter on the decoration of the Sessions Room in the Lower House of Parliament. Finally, Castellano completed his artistic training in the Museo del Prado between 1844 and 1846. Over the course of his lengthy career he focused on history painting, with the result that he remained associated with official art circles. In addition, Castellano depicted scenes of picturesque daily life that reflected his particular interest in the theatre and bullfighting. He also possessed other facets that made him a notable artistic figure in the 19th century, namely his activities as a collector and draughtsman. During his trips and through his numerous acquaintances Castellano assembled a large collection of prints, drawings and photographs. Of the more than 18,000 photographs that he owned, 700 are views, primarily of Madrid and other places in Spain as well as Rome and Italy, while the remainder are portraits. Together they constitute a remarkable corpus from an artistic, documentary, historical and sociological viewpoint. 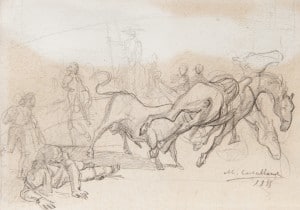 Death of a Horse 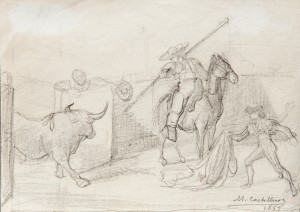