Manuel Miranda is a practically unknown painter. With regard to his early life it is only known that he was born in Grazalema, Cádiz, and that he trained at the Academia de Bellas Artes de San Fernando in Madrid. His output focused primarily on historical subjects and portraits and he is known to have executed a portrait of Queen María Cristina, a work now in the Monastery at El Escorial. He also executed two portraits of Spanish monarchs for the series “Chronological Series of the Monarchs of Spain”. This association with court circles resulted in his professional collaboration with the painter Fernando Brambilla, for whom he painted the figures in the latter’s “Views of Aranjuez”. The last known information on Miranda relates to his participation in the National Fine Arts Exhibition of 1864 in which he obtained an honorary mention. Manuel Miranda was also involved in the production of drawings for a series of prints illustrating the First Carlist War, in the manner of Goya’s Disasters of War. 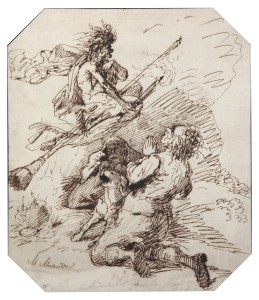