Mateo Cerezo was born in Burgos in 1637. His talents becoming obvious at an early age, he decided to go to Madrid although it is not known for certain whether he entered the studio of Juan Carreño de Miranda (1614-1685) or that of Antonio de Pereda (1611-1678). From 1660 onwards the influence of Carreño and Alonso Cano became more obvious in his painting and Cerezo directly borrowed some of Cano’s figures and physical types in his works. As a result Cerezo evolved from a provincial style characteristic of Burgos to a more refined, courtly one. Works of this period manifest a more dynamic, colourful style with more open lines and a new emphasis on the settings. Also notable are the richness of the details in the play of light and shade and the splendid clothing of the figures, the latter indicating his new knowledge of the work of Titian and Van Dyck, acquired via Carreño. Cerezo’s graceful, vibrantly colourful paintings soon attracted a wide-ranging group of clients. He received commissions for still lifes as well as religious compositions, not only small works of private devotion but also large-scale altarpieces for churches and religious houses. Cerezo died young in 1666 at the age of twenty-nine. 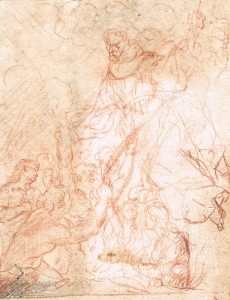