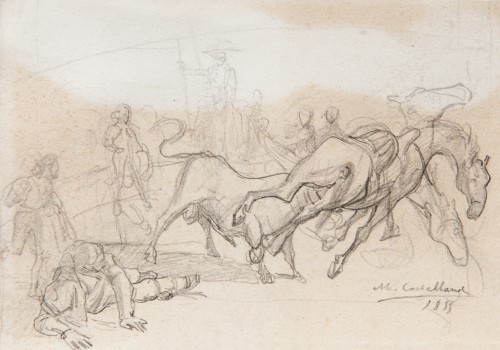 Death of a Horse

Joy and suffering. Light and shade. Blood and sand. Fiesta and mourning. Life and death come together in the bullfight. All these concepts, which were so closely allied to the Romantic imagination, made the bullfight one of the principal subjects in 19th-century Spanish painting. The plasticity of the movements in that dance in which life itself is at stake meant that many artists turned to the depiction of this spectacle in the form of canvases, prints and drawings. Manuel Blas Rodríguez Castellano was particularly fascinated by the tension, fear, courage and beauty of the world of the bullfight. Better known as Manuel Castellano, he was a lesser but extremely interesting figure both for his role as a “chronicler” of the world of bullfighting and for his collecting interests.

Castellano was born in Madrid in 1826 and studied at the Escuela de Bellas Artes de San Fernando where he was taught by Juan Antonio and Carlos Luis de Ribera, from whom he learned academic drawing. He also worked as an assistant for the latter on the decoration of the Sessions Room in the Lower House of Parliament. Finally, Castellano completed his artistic training in the Museo del Prado between 1844 and 1846. Over the course of his lengthy career he focused on history painting, with the result that he remained associated with official art circles. In addition, Castellano depicted scenes of picturesque daily life that reflected his particular interest in the theatre and bullfighting.

Between the mid-1850s and the late 1860s Castellano regularly participated in the National Fine Arts Exhibitions where he obtained an honorary mention in 1856 for his painting The Horses’ Courtyard at the Bullring in Madrid (Madrid, Museo Nacional del Prado, P-4274). He subsequently won a third medal at the 1862 Exhibition for The Death of Daoíz and Velarde (Madrid, Museo de Historia); another in 1866 for The Imprisonment of Fernando Valenzuela (Madrid, Museo del Prado, P-5554); and another in 1868 for The Death of the Count of Villamediana (Madrid, Museo del Prado, P-3925). These awards meant that the decade of the 1860s was the most professionally successful of the artist’s career. A new phase began for Castellano in 1873 with the creation of the Academia Española de Bellas Artes in Rome and he applied for one of the four honorary grants that were offered to painters to spend time in that city. After challenging the results of the competition, he was finally awarded a grant in 1874. In Italy, Castellano produced a number of copies of paintings including Saint Ursula by Carpaccio, which he sent to the Spanish Government in 1876. In 1878 he moved to Paris where he painted The Swearing of the Oath by the Marquis de la Romana’s Troops (Madrid, Museo Nacional del Prado, P-3388), a canvas that was acquired by the War Ministry of the day. 1 Castellano returned to Madrid where he died of a heart attack on 3 April 1880.

As noted above, Castellano’s best known works reflect the dominance of history painting at the time, within which genre he was not particularly outstanding. However, he possessed other facets that made him a notable artistic figure in the 19th century, namely his activities as a collector and draughtsman. During his trips and through his numerous acquaintances Castellano assembled a large collection of prints, drawings and photographs. Of the more than 18,000 photographs that he owned, 700 are views, primarily of Madrid and other places in Spain as well as Rome and Italy, while the remainder are portraits. The latter were of the studio type and it would seem that Castellano acquired excess prints from studios of the day. Together they constitute a remarkable corpus from an artistic, documentary, historical and sociological viewpoint, given that they include images of individuals from all social classes and also provide information on contemporary fashion and on the topography of cities at the time.

Most if not all of this collection entered the Biblioteca Nacional, a small part of which was donated by the artist while the rest was sold to the Library by his nephew and heir after Castellano’s death. 2 Within this collection is a small album with eight photographs of bullfighting taken by the artist (BA 3103). Some are photographs of sketches but two of them, numbers 6 and 7, are photographs of finished paintings. While the whereabouts of most of Castellano’s paintings on bullfighting is now not known, given that they entered private collections, the two paintings that correspond to these photographs were auctioned in the 1980s at Ansorena in Madrid. 3 Their titles are Suerte de Varas (oil on canvas, 53 x 78cm) and Death of a Horse (oil on canvas, 52 x 78), 4 which are the subjects depicted in the present drawings. However, although they reveal some shared features, the compositions are different and it should be remembered that Castellano produced hundreds of drawings on bullfighting using different approaches to the subjects and compositions. Among the more than 1,500 drawings collected by the artist and now in the Biblioteca Nacional, 355 are bullfighting scenes by his own hand, executed in the 1850s and 1860s. They are divided into various albums, two of which (BNE, Dib 15/31 and 15/32) contain a total of 111 drawings of bullfighters, picadors’ assistants, banderilleros and other figures from the different episodes within the bullfight. Another album containing 50 drawings is devoted to picadors in different poses (BNE, Dib 15/33), while two more contain preliminary sketches for finished compositions (BNE, Dib 14/24 and 15/36). Finally, two others are filled with drawings of bulls (BNE, Dib 15/34 and 15/35). These albums are extremely interesting given that the figures are treated as academic models and their bodies, facial features and even “characters” are perfectly conveyed. 5 Furthermore, Castellano added annotations on the breeders, brands, date of the bullfight, the name of the animal and its behaviour in the ring, thus revealing an interest close to portraiture when depicting the characteristics of the bulls.

Like the present two sheets, most of Castellano’s drawings are executed in pencil on white paper. The artist paid particular attention to the highlights, which he sometimes emphasised with lead white, as well as to the shadows, although never losing the force and spontaneity of an immediate sketch. The result is a body of work that pays tribute to the world of the bullfight, given that all these figures as well as the bulls, horses and mules are depicted by Castellano with the enormous respect and with the admiration of an artist paying tribute to another art form.