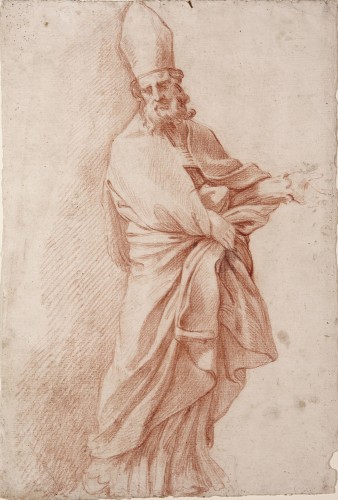 The present drawing, executed in red chalk on paper, depicts a Bishop Saint. The bearded figure is defined with deft touches of light and shade applied with the sole use of the chalk. The presence of the mitre and chasuble are the only elements that indicate that this is an ecclesiastical dignitary. The ample, well defined folds of the clothing give the figure a sense of weight and volume and thus create solid, sculptural forms. This three-dimensional quality suggests that this drawing is the work of a sculptor, a hypothesis supported by the fact that the Metropolitan Museum in New York has a small terracotta of a Bishop Saint (36.2cm, MET, inv. no. 68.218) that is identical to the one depicted here. This would suggest that the artist remained true to his academic training, firstly producing a sketch on paper followed by its realisation as a sculpture.

The question thus arises of who this sculptor might be. The Metropolitan Museum has attributed the terracotta to an Italian artist of the second half of the 17th century, having previously catalogued the work as by Melchiore Caffà. This attribution may have arisen from a comparison between the terracotta in New York and two more in the Hermitage in Saint Petersburg that depict Sant Andrew and Saint Andrew of Avellino (44 cm). Both are attributed to Caffà and are notably similar to the Metropolitan sculpture. However, the reappearance of the present sheet with José de la Mano Galería de Arte opens up new directions for attribution. The likely execution of the present drawing by a sculptor, its characteristically Spanish technique and the distinctive way of creating the shadows with parallel, diagonal lines, suggest that both this sheet and the Metropolitan sculpture are by Felipe de Castro. The artist deploys the same approach to creating volumes and light and shade in other sketches, such as the Seated Bishop in the Real Academia de Bellas Artes de San Fernando, Madrid (inv. no. 2665). 1 That sheet is clearly similar to the present one both technically, in that both are in red chalk on beige paper, and stylistically, as they are notably sculptural drawings in which the drapery is the most important element and in which the faces are strikingly similar in type, with deeply set eyes and beards formed from curling locks.

Both the sculpture in New York and the present drawing can be dated to the period of Castro’s training in Rome (1733-1746), a period when, like many other Spanish artists, he studied at the French Academy in that city where he drew drapery studies of figures and copied works by the great Renaissance and Baroque masters such as Raphael, Guido Reni, Alessandro Algardi and Caffà as well as others by contemporary figures including the sculptor Camillo Rusconi. These innovative academic practices, which abandoned the traditional study of the nude, were intended to teach the students how to give a sense of movement to clothed figures. Particularly important within this method was the depiction of ecclesiastical figures: “on pose des draperies et j’emprunte des ornements d’église pour diversifier et pour s’impatroniser du vrai, qui est l’âme de notre métier.” 2

Thus both the depiction of an ecclesiastical figure without specific attributes, as recommended by the teachings of the director of the French Academy, and the fact that the forms in the present work recall sculptures by Caffà, who frequently made use of this approach, suggests that the present sheet is an academic study by Felipe de Castro. In addition, there are clear connections between this sketch and other drawings by artists who attended the French Academy, including Subleyras, Bouchardon and Slodtz. Their sketches make use of similar models and also focused on the treatment of the draperies and the handling of light and shade. Finally, they share a similarly academic style.

Little is known about the early years of Felipe de Castro although it is believed that he was born in the early 18th century in Noya (La Coruña). 3 At a very young age he was apprenticed as a sculptor in the studio of Diego de Sande in Santiago de Compostela and subsequently trained with Miguel de Romay. In 1724 he left for Portugal and continued his studies in Lisbon. Two years later he travelled to Seville where he joined the studio of Pedro Duque Cornejo (1677-1757). The arrival in Seville of Philip V and Isabella Farnese allowed him to make contacts with the court. In 1733 Castro left for Rome where he remained for thirteen years studying and perfecting his skills under the protection of the Spanish minister Sebastián de la Cuadra, Marquis of Villarías. From 1740 onwards he benefited from a grant from the Spanish crown and in 1746 he was summoned to Spain by Philip V to undertake various works for the new Royal Palace in Madrid. Castro arrived in early 1747 and on 23 March that year he was appointed Court Sculptor by Philip’s successor Ferdinand VI. On 21 June he was appointed Director of Sculpture to the Preliminary Committee for the foundation of the Academia de San Fernando and when that institution was founded on 12 April 1752 Castro occupied the position of Director of Sculptor. His highly successful career concluded in 1763 with his appointment as Director of the Academia. The artist died on 25 August 1775 in Madrid and was buried in the now lost church of Santa María de la Almudena.