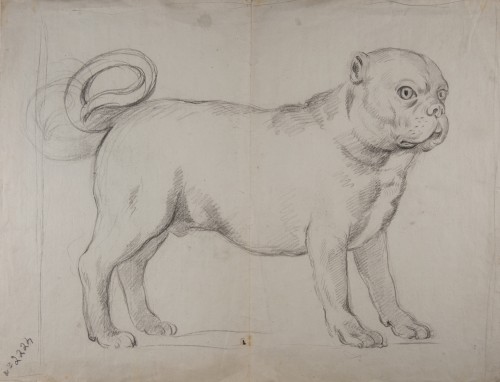 The present drawing is a naturalistic depiction of a French bulldog by Antonio Carnicero. The careful study of the animal’s appearance and anatomy, the delicate pencil strokes and the characteristic zig-zag hatching allow this drawing to be stylistically associated with the depictions of horses that the artist executed around 1800. 1 The latter were made as preparatory studies for the series of prints on the Royal Riding School for which Carnicero produced thirteen plates. They depict the classic repertoire of dressage positions, while the riders are the leading members of the Spanish royal house as well as the royal favourite and Prime Minister Manuel Godoy.

The present sheet was not produced for subsequent engraving but is a rather a sketch for an oil painting. In fact, the dog depicted here also appears in Portrait of a Cleric by Carnicero (Madrid, private collection), in which the sitter may be Juan Escoiquiz (1762-1820), a canon of Saragossa and tutor to the Prince of Asturias, don Fernando de Borbón. 2 In that small oil on panel (35 x 27 cm) the dog is located in the middle-ground in a slightly raised position within the composition. It looks attentively at the cleric, who can be assumed to be its owner. The principal difference between the drawing and the oil lies in the fact that in the painting the dog is seated while here it is standing on all four legs. This compositional change may be due to the fact that Carnicero did not have room in his small panel for depicting the animal standing. Nonetheless, there is no doubt that it is the same dog, given that its head has sufficient distinguishing features: the lively, round eyes, the small, trimmed years, the snub, hairy muzzle, the mouth in the shape of a small triangle and a distinctive white patch beneath its dewlap.

Carnicero possessed a striking ability to reflect the different social types and classes of contemporary Spanish society. This drawing also demonstrates his skill at capturing the particular physical characteristics of animals, resulting in perfect “portraits” of them. After many long and laborious years as an artist, in 1796 this ability finally won him the position of Court Painter to Charles IV. Carnicero belonged to a dynasty of renowned 18th-century Spanish artists which meant that he had learned the lessons of art from infancy. He entered the Real Academia de Bellas Artes de San Fernando as a student in 1758 and two years later moved with his brother Isidro to Rome where he remained for six years. There he received the training offered to grant students, perfecting the technique of drawing and executing copies of classical sculptures and paintings by the Old Masters. Following his return to Spain in 1766 Carnicero became a professor at the Academia de San Fernando and was awarded various prizes. In 1769 he obtained the commission to paint six large canvases on the life of Saint Francis of Assisi for the Basilica of San Francisco el Grande in Madrid (still in situ). He thus gradually began to move in Court circles and from 1775 was involved, under the supervision of José del Castillo (1737-1793), in the execution of tapestry cartoons for the Private Cabinet of the Princess of Asturias in the palace of El Pardo. In addition, from 1781 Carnicero produced various paintings for the series of panoramic views of ports, roads, bays, islands and shipyards of Spain commissioned from Mariano Ramón Sánchez (1740-1822) by Charles III for the small rooms of the library of the Prince of Asturias in the Royal Palace in Madrid. In 1788 Carnicero was made a member of the Academia de San Fernando while in 1796, as noted above, he was appointed Court Painter to Charles IV. From that point onwards he executed numerous portraits of members of the Court and of the royal family, either in the form of canvases or as prints for the Kalendarios and Guías de forasteros. Antonio Carnicero died in Madrid on 2 June 1814.