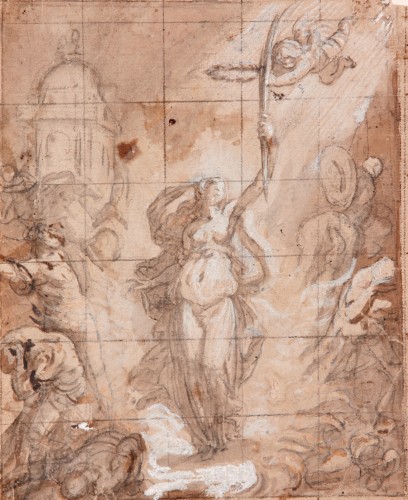 This second drawing by Vicente Carducho has a complex iconography and various suggestions have been made as to its subject. In the centre of the composition a female figure holding a palm emerges forcefully onto the composition surrounded by what appear to be flashes of light. The power of these flashes has the effect of blinding the soldiers on either side of her, some of whom fall back while others fall to the ground. At the upper left is a lightly drawn horse supporting an architectural construction that may be a tower or custodium for the Host. Finally, the scene is completed at the top with a small angel descending from the upper right to crown the female figure with a wreath of olive or laurel.

The presence of elements such as the palm, the angel with the wreath and the tower suggest that this may be a somewhat theatrical depiction of Saint Barbara. This saint, daughter of the satrap or Persian provincial ruler Dioscuros, was locked up by her father in a tower to prevent her from converting to Christianity. Barbara asked for three windows to be opened in the tower, symbolizing the Trinity. When her father heard of this he had her martyred, killing her on a mountain. Immediately after his daughter’s death Dioscuros was struck by a ray of lightening and died. This may be the moment depicted in the drawing; in the centre is Saint Barbara with her martyr’s palm, crowned by an angel as she appears among the soldiers who are literally stunned by the brilliance of her presence. The tower could thus refer to the place in which the saint was imprisoned and is an element commonly found in depictions of this figure.

Alternatively, a second interpretation may be possible. In his Iconology (Rome, 1593), Cesare Ripa describes Victory as a woman “without wings, with a palm and laurel wreath.” 1 These same elements are also born by Peace, who, according to Ripa, can be depicted with an olive wreath symbolising “the pacification and reduction of angry sentiments.” 2

From a technical viewpoint, the drawing can be firmly attributed to Vicente Carducho. The rapid line with which the figures are created, the sepia washes and highly characteristic manner of applying the white lead with very thick brushstrokes are all unmistakable. The drawing need only be compared with others by the artist such as Saint Gregory the Great (Madrid, Museo Nacional del Prado, inv. D-83), or the Communion of a Nun Saint (Madrid, Museo Nacional del Prado, inv. D-91), which are clearly by the same hand. The dazzling apparition of the saint can also be compared with Saint Bruno appearing to Rogerio Guiscardo, Duke of Calabria (Madrid, Biblioteca Nacional, inv. Dib/16/35/3), which is conceived in a notably similar manner through the use of powerful strokes of white lead. 3 The airy female figure, be it Saint Barbara, Victory, or Peace, can be seen in other compositions by Carducho such as the illustration to the Fifth Dialogue in his Diálogos de la Pintura (Madrid, 1633). 4 The stylised nature of that figure, with her rounded stomach, vaporous clothing and ribbons that tie up her hair and whirl around her in the wind are elements found in both depictions.

Finally, reference should be made to some possible sources used by the artist when devising this composition. The female type is notably comparable to one found in prints by Goltzius, Saenredam and Matham, and is also to be seen in the illustrations of allegorical figures accompanying Ripa’s text. The overall conception of the subject would seem to be taken directly from The Resurrection of Christ by Cornelis Cort (1569), while the small angel with the wreath is a literal copy of the one in an engraving of Hope by Jan Saenredam.

[3] These drawings are illustrated and described in Angulo, Diego and Pérez Sánchez, Alfonso E., A Corpus of Spanish Drawings. Madrid School 1600 to 1650. London, Harvey Miller, 1977.