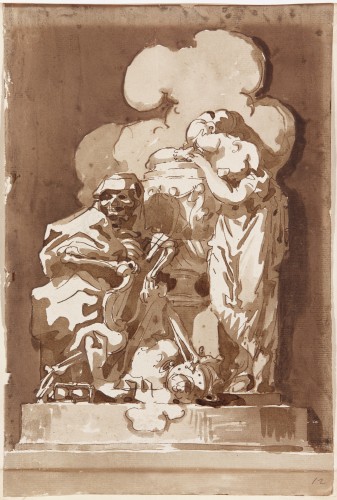 Few concrete facts are known about the life of Charles de la Traverse, and his career has been little studied. It is known that he was born in Paris in 1726 and that he began his training in painting there with François Boucher (1703-1770). In 1748 he was awarded First Prize by the French Royal Academy of Painting and Sculpture for Tobias burying the Dead (Saintes, Musée des Beaux-Arts), consequently obtaining funding for three years to study in Rome. There his technique rapidly advanced and he was considered the most promising French artist of his generation. As a result La Traverse received considerable financial support both from the French monarch and from various other leading figures. Having completed his studies in Rome, he went to Naples in order to see the archaeological excavations at Herculaneum. There the artist entered the service of the Marquis d’Ossun, French ambassador in Naples, whom La Traverse would follow to Madrid in 1759 following the ascent of the King of Naples to the Spanish throne as Charles III. In Madrid the artist devoted himself to teaching and to producing small-format cabinet paintings, as stated by his best pupil, Luis Paret y Alcázar (1746-1799), who must have studied with him between approximately 1767 and 1775. La Traverse was a strict master who forbade the practice of copying prints and who encouraged the use of classical models and “the practice of first-hand study”.

Almost nothing is known of La Traverse’s output in Spain, with the exception of 78 drawings now in the National Library, Madrid2. In 1800 Ceán Bermúdez noted that with regard to painting, La Traverse worked in: “[…] all its modes and types: so much so that it is hard to know whether he was better in oil, tempera and miniature, in History painting, portraits, flowers and landscapes. He had an extremely fertile imagination and great erudition when composing a painting”.3 Despite this, the only work on canvas attributed to the artist’s Spanish period and one that reveals his merits is The Allegory of the Birth of an Infante (Madrid, Lázaro Galdiano Museum) 4. In 1787, seriously ill, he returned to Paris where he may have died that same year.

As noted above, most of La Traverse’s surviving oeuvre consists of drawings. They reveal a secure, classical training combined with the use of a markedly individual and unmistakeable style. Such drawings are imbued with a Baroque spirit through the smooth, zig-zagging lines that create balanced, solid compositions. Above all, they focus on pronounced contrasts of light and shade created from the use of judiciously distributed sepia washes.

The present drawing is an Allegory of Death and reveals the characteristics of the artist’s style noted above. It is drawn with sinuous strokes in ink that outline the figures, in addition to sepia washes that modulate the contrasts of light. On the left is Death, seated and swathed in a cloak, leaning its left shoulder against a funerary urn. The principal axis of the composition is occupied by the urn with the ashes of the deceased person. Bowed over it, on the right, is a female mourning figure. The figures are located on a podium or pedestal that creates a monumental and notably sculptural image, suggesting that the ensemble was created to crown a funerary monument.

The drawing should be closely related to the group now in the National Library in Madrid, which also includes funerary images. These are numbers 9243, 9244, 9245 and 9250 in Ángel María Barcia’s catalogue 6. All were previously in the collection of Pedro González de Supúlveda 7. The drawings in the National Library were conceived as sketches for the funerary monument of the Marquis d’Ossun, the artist’s patron. In fact, the Marquis outlived the artist by one year, as noted on the reverse of two of these drawings. The group as a whole reveals the pronounced influence of the numerous funerary monuments that La Traverse had seen in Roman churches, and as such the drawings are a direct result of his experience in Italy and the artistic lessons he assimilated there.

The present drawing may also have been a sketch for the tomb of the Marquis. It would seem to be a subsequent stage or a later version of the design for the sheet entitled Funerary Urn and sleeping, reclining pastoral Muse 8. The dimensions of that work (200 x 300 mm), its technique and compositional approach are identical to the present drawing.

In addition, the drawing on display here is also notably comparable to Allegorical Figure of Melancholy (New York, Metropolitan Museum, no. 1983, 431), 9 in which the technique and dimensions are again very similar. It can thus be assumed that the New York sheet and the present one would have belonged to a series of allegorical scenes executed by La Traverse during his time in Madrid, around 1763, which is the date inscribed on the drawing in the Metropolitan Museum.

Both hypotheses can be considered plausible, although the sculptural feel of the present drawing and its marked similarities to no. 9245 in the National Library suggest that it is one of the designs that La Traverse executed for the funerary monument of the Marquis d’Ossun.

[7] Chief engraver to the Mints in Spain and the Spanish colonies during the reign of Charles III, and one of the leading collectors of drawings, prints, medals and casts of the period.