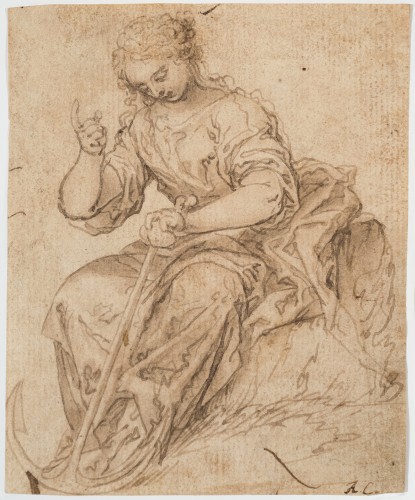 This rapid but firmly defined sketch in grey-brown ink depicts a seated woman supporting an anchor in her left hand which rests on the ground. The volume of the figure is created through the use of light greyish washes applied to the folds and areas of shadow, achieving an effect close to sculpture through great economy of means. This small but remarkable drawing has been catalogued by the specialist Zahira Véliz as an example of the creative genius of the Granada-born artist Alonso Cano, 1 as the initials “A.C” applied with the same pen at the lower right corner of the sheet also indicate.

With regard to the work’s iconographic meaning, the only attribute that allows the figure to be identified is the anchor. This identification is based on both a biblical text, Saint Paul’s Epistle to the Hebrews, and on Cesare Ripa’s Iconology. The former states that: “Which hope we have as an anchor of the soul, both sure and steadfast, and which entereth into that within the veil” (Hebrews 6: 19), which is the origin of the iconography of Christian Hope as a firm anchor. Ripa offers various descriptions of Hope, of which the most recognisable and widely used is that of a matron with plants or lilies in her hands, 2 or a woman breastfeeding a putto. 3 However, in the Nuova Iconologia, Hope is also represented as a “donna vestita di giallo […] & nella sinistra terrà un anchora.” 4 In addition, the Iconologia Cristiana states that Hope’s attribute of a ship’s anchor represents that which “supports and consoles us during misfortunes and dangers.” 5

The present drawing is thus clearly an allegorical depiction of Hope but the purpose for which Cano created it is not known. It can be dated around 1645-55 on the basis of its similarities to other works by the artist, particularly its resemblance to some of the female figures by the artist in the “The Life of the Virgin” cycle for Granada cathedral. 6 It would appear that for the creation of this figure Cano was inspired by one in the engraving of Faith, Hope and Charity by Hieronymus Wierix, based on a drawing by Gerard van Groeningen (1572) (fig. 1). The fact that Hope is shown seated, the manner of supporting the anchor with the left hand and the position of the raised right hand with one finger also raised all appear to be directly derived from that print, even though the bird on the hand present in the print is not included. Cano habitually based himself on engravings, as Palomino recounted in his Lives: “Cano was not particular about making use of the most insignificant little prints, even if they were coplas: because by adding and removing he made full use of them to devise marvellous concepts: and when some painters said this was an activity unworthy of an eminent inventor he replied ‘Let them do the same with me, I forgive them for it.’ And he was right, as this was not stealing but rather making good use; as in the end what he produced was no longer what he had initially seen.” 7

In 1648 Cano illustrated Francisco de Quevedo’s El Parnaso Español, for which he devised the front cover and the nine Muses that would subsequently be engraved by Hermann Panneels and Juan de Noort. 8 All the Muses are depicted seated, in three-quarter profile and gesticulating, for example the figure of Melpomene (fig. 2. BNE, sign. R-4418). The theological Virtues were not included in that book but there is a clear relationship between the Muses and the present image of Hope, indicating that Cano must have been inspired by those figures for another commission.

Some experts have pointed to Cano’s possible participation in 1649 in the entry into Madrid of the court of Mariana of Austria, 9 for which Sebastián de Herrera Barnuevo produced a temporary decoration installed opposite the Torrecilla del Prado of Mount Parnassus which was based on Panneels and Noort’s engravings. 10 It is thought that Cano was involved in the decorations of the Puerta de Guadalajara and that he may also have produced designs for other decorations along the entry route 11 with which the present figure of Hope could be related. 12 The di sotto in su viewpoint used for the figure and its markedly sculptural character indicate that it was intended to be located high up and that it was a design for a three-dimensional work, which would be coherent with a possible ephemeral decoration. However, although the theological Virtues of Faith, Hope and Charity were widely employed images for the reception of sovereigns as they made direct reference to their virtues, there is no record of their presence on the Puerta de Guadalajara, nor is it absolutely certain that Cano participated in its decoration. 13