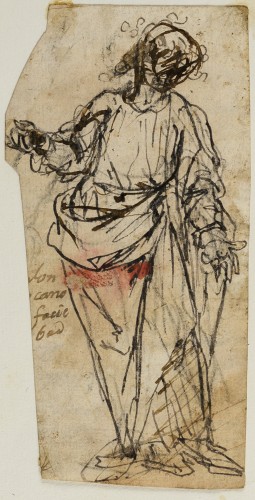 Figure of a male or female Saint

Rapid, agitated, almost electrical strokes executed in pen and grey-brown ink bring this small sketch of a male or female figure to life. The economy of means and the effects achieved by the artist with those means reveal his mastery, even though the lack of specific attributes and definition in the image prevents a precise identification of its subject. Movement, a sense of volume and the elegance of the forms are all conveyed through just a few lines of different thicknesses, attesting to the technical virtuosity, expressive maturity and facility of the stroke attained by the creator of this drawing: Alonso Cano, the great painter, sculptor and architect from Granada. In his account of the artist’s charitable generosity, Palomino refers to Cano’s tremendous facility to execute and invent figures: “[…] it very frequently happened that when he came across some poor and needy person, and having already used up the money that he kept for the purpose, he went into a shop and asked for a sheet of paper and pen and ink, and with the pen he would draw some figure, or head, or some other thing such as a cartouche or other architectural ornament and he would say to the poor person: ‘Go to so-and-so’s house (the name of someone whom he knew to appreciate him) and tell him to give you so much for this drawing.’ Thus by this method he never failed to give alms and he had so much facility for drawing anything that he left behind numerous drawings […].” 1

The attribution to Cano of this previously unpublished drawing is not only supported by the signature at the centre left, which reads “[A]lon/ [so] cano/ facie/ bad”, but also by its technical, expressive and formal similarity to other sketches and paintings by the artist, as detailed below. Cano produced numerous informal and spontaneous figure studies of which the largest number depict saints. All are executed in pen and ink with vigorous strokes and are small in scale, as Zahira Véliz has studied and demonstrated. 2 Two clear examples that are very similar to the present sheet in terms of technique, dimensions and concept are the sketches for the figures of The Blessed Gonzalo of Amarante (fig. 1, RABASF, 159 x 90 mm, inv. no. 2117) and Christ gathering his Garments (BNE, 91 x 87 mm, sign. DIB/15/2/13). Both are again of small size, executed in pen and grey-brown ink and on largely cut-down sheets. They are rapid, alla prima drawings which nonetheless achieve a pronounced sense of volume in the figures. Works of this type date from Cano’s mature period, around 1645-50 when he was in Madrid in the service of Philip IV as court painter and at a date when he had fully developed all his artistic resources, enabling him to give his figures a powerful expressive charge through great economy of means.

There is also another detail that allows this sketch to be directly associated with Alonso Cano. A series of sketches by the artist have numerous spots of vivid red on them that are not directly related to the subject depicted, as is the case in the middle zone of this figure. It is also found on works such as The Archangel Michael in the Uffizi (inv. no. 10259S) and Saint Joseph with the Christ Child in the Museo del Prado (cat. D-000066). These spots seem to have been transferred from some material in the studio and given that these drawings were frequently used in these working spaces, one sheet may have become stained and then affected others.

The composition of the figure, shown standing with the weight shifted towards one foot and the arms open to create a balanced diagonal, is typical of Cano’s figures, particularly those from his Madrid years, as noted above. A similar pose is to be seen in the figure of Saint Isidore in The Miracle of the Well (fig. 2, MNP, P-002806) and in the Juno of this same period (private collection), 3 as well as in the above-mentioned Blessed Gonzalo of Amarante. The present drawing can thus be assigned to that chronological period, specifically towards the end of the artist’s years in Madrid.