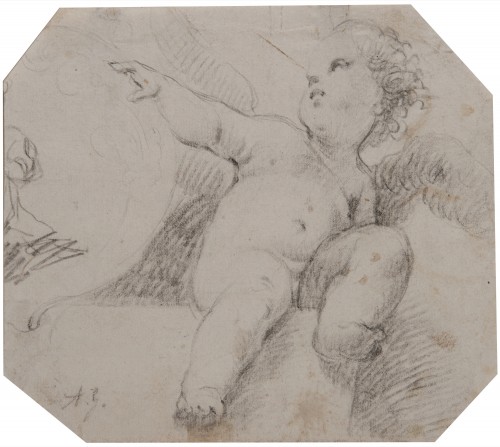 Luca Giordano constitutes an important link between Italy and Spain in the last decades of the 17th century and a clear example of the cultural exchange that arose from the movement of artists and works across Europe. Born in Naples, at that date part of the Spanish Crown, Giordano trained in the studio of the Spanish painter José de Ribera, who was the greatest artist of the day in the city. After an initial period influenced by Ribera’s style, Giordano came to dominate the art world in Naples through his unique fusion of the Neapolitan tradition with the most expansive Baroque manner exemplified by Pietro da Cortona in Rome. In contrast to his master Ribera, Giordano’s fame was established on the basis of his skill in the production of major fresco schemes, 1 helped by his proverbial rapidity in his handling of the brush.

Throughout his career Giordano benefited from the protection of the Viceroys of Naples, who sent a steady flow of his works back to Spain for the royal collections. As a result, when he arrived in Madrid in 1692, summoned by Charles II, Giordano’s fame was already well established at Court. During the ten years or so that he spent in Madrid, Giordano’s luminous style was highly appreciated by the monarchy and nobility. Mural painting and decorative schemes prevailed in his output during these Spanish years as a result of which the Bolognese manner that had been cultivated to date was displaced. 2

Notable among Giordano’s public commissions was his participation in the frescoes in the old church of San Antonio de los Portugueses, by then under the care of the German community at Court. He firstly repaired the damage to the large dome with its Glory of Saint Anthony by Juan Carreño de Miranda and Francisco Rizi (1662-1666). Ultimately, Giordano’s work on the church totally transformed its interior as he substantially altered Carreño and Rizi’s work and extended the frescoes across all the walls with scenes from the life of Saint Anthony of Padua and images of royal saints associated with the Spanish monarchy. Giordano completed this project between 1699 and 1701, with some interruptions. Fortunately, it has survived intact to the present day. 3 In order to prepare this ambitious project he executed a large number of preparatory drawings and studies of both the principal scenes and figures and of details and secondary figures. In cycles of this type Giordano habitually made use of numerous small angels and zephyrs that acted as linking elements between the various scenes as well as functioning to enliven the fictive space.

The present drawing is one of these preparatory studies. While Giordano also made use of these child angels in his frescoes at El Escorial and in the sacristy in Toledo cathedral, their pose here corresponds to that of the pairs of cherubim around the tambour of the dome in San Antonio. In fact, they literally repeat the pose and physiognomy of the figure on the right of a recently published drawing of Two Angels holding a Cartouche. 4 In contrast to that work, which is in wash, the present, newly published drawing is entirely in black chalk, applied in characteristically agile and loose strokes. It was during his Spanish period that Giordano experimented with new graphic techniques, among which the one used here can be seen as an alternative to wash. This is also the case with Boy with a Dolphin and an Anchor 5 (private collection, USA) of 1692-1693 in which there is a comparable use of hatched lines and a subtle blurring of the chalk. On other occasions this type of hatching is used in combination with a delicate wash for the shadows, as in Death of Saint John of God in the Galleria degli Uffizi. 6

This new drawing, with its graceful and charming subject and deft, free handling, contributes to a better understanding of the artist’s creative procedures in his final years. By that date Giordano made use of a variety of media in order to experiment with effects of shadows and textures that helped him to select a final option. For this reason black chalk was the medium most suited to his innate rapidity, creating firmly defined or agitated strokes depending on the movement of the artist’s hand. In addition, this was an habitual technique among Madrid artists at this date and the first generation of Baroque court artists, led by Carreño and Rizi, are characterised by their distinctive drawings in black and coloured chalks. As a result, it is possible that Giordano tried out a method that he discovered in the context of his new surroundings in Madrid, as was the case with some of his paintings of this period.