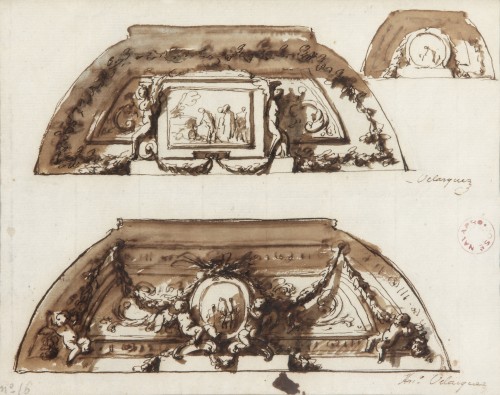 Together with his brothers Luis and Alejandro, Antonio González Velázquez belonged to an important family of Madrid painters of the second half of the 18th century. 1 Born in Madrid in 1723, he initially trained at the Real Academia de Bellas Artes de San Fernando. His remarkable gifts earned him a grant from the Study Committee in Rome in 1746, to where he moved the following year, completing his training with Corrado Giaquinto. From the latter González Velázquez rapidly acquired a mastery of oil painting and above all of fresco painting. As a result, in 1748 Giaquinto entrusted him with the execution of various canvases and frescoes for the dome of the Spanish church of the Trinitarians on Via Condotti.

In 1752, after completing his studies, González Velázquez was summoned by the Vice-protector of the Academia in Madrid and Minister of State José de Carvajal y Lancaster to execute the fresco decoration of the dome of the Holy Chapel in the Basilica del Pilar in Saragossa. The success of this project resulted in the artist being summoned to Madrid where success in both court circles and with the Academia awaited him and he was appointed Academician of Merit in 1753 and Deputy Director of Painting in 1767, followed by his appointment as Director of the Academia in 1787. Among royal commissions, González Velázquez executed compositions in oil and frescoes for the Madrid churches of San Francisco el Grande, the Encarnación and the Salesas Reales. His greatest success, however, was undoubtedly the decoration of the ceiling of the new Royal Palace under the direction of Anton Raphael Mengs. During the last years of his life González Velázquez gradually lost favour and failed to obtain major public commissions due to the rise of the new generation of painters trained in the circle of Mengs.

The present unpublished drawing is a Design for a Decoration of a Palace Ceiling. It is signed at the centre right and at the lower right corner in handwriting that is identical to that which appears on the back of the drawing of Saint Genevieve (private collection), making its attribution quite conclusive. 2 The drawing is a study for the decoration of a ceiling, offering various different solutions. The upper part thus has an initial sketch of a scene in a rectangular frame flanked by two nude, winged female figures, the whole episode surrounded by garlands. In the second proposal the rectangle has been replaced with an oval supported by two putti, on either side of which extend two garlands held up by two small angels at the corner of the ceiling. This final solution recalls the design by González Velázquez for the Antechamber of the Prince and Princess of Asturias in the Royal Palace in Madrid (1763) for which there is a preparatory drawing in the Biblioteca Nacional, Madrid (inv. dib. 13/5/59).

While the intended destination of this design is not known, the richness of the exuberant decoration suggests that it may have been one of the royal residences in which the artist worked, perhaps the Royal Palace in Madrid or the palace at El Pardo. With regard to the former, González Velázquez designed a total of six rooms, working alone or with his brother Luis. 3 Antonio worked on the Chamber of the Queen Mother’s Apartments between 1763 and 1765, on the Second Antechamber of the Infante Don Luis (c. 1765), 4 and on the Antechamber of the Prince and Princess of Asturias (1763). At the same date his brother Luis painted the now lost ceiling of the First Antechamber of the Infante Don Luis. There would therefore have been two more designs to complete the list of projects referred to in Sabatini’s account (see note 3) and it is possible that the present drawing may correspond to the now lost decoration of one of the private rooms in the Royal Palace, a building that has undergone numerous transformations over the years.

The second possible destination, that of the palace at El Pardo, had a building in its gardens known as the Gallinero which was erected on the orders of the Prince of Asturias. Prior to the construction of the present Casita [small recreational palace] at El Pardo, the architect Manuel López Corona designed a country house for the Prince of Asturias (the future Charles IV) between 1769 and 1772. 5 It had about six rooms including the Dining Room, the ceiling of which was painted by González Velázquez between May and August 1773. 6 The fact that the present design clearly relates to a small room of the type to be found in that original country retreat suggests that this could be a preparatory design for its decoration. A telling comparison can be made with the designs of 1786 by the French decorator Jean-Démosthène Dugourc for the Casitas at El Escorial and El Pardo, suggesting that the present drawing is for a similar type of small room. For all the above reasons the present drawing should be dated between 1763 and 1773 at the time when González Velázquez was working on these royal residences.

[3] As described in an account written in 1772 by Francisco Sabatini that clearly states that Antonio and Luis painted “six ceilings in public and private rooms, in different corridors and apartments of Their Majesties and Their Royal Highnesses”. See Arnáiz, José Manuel, Antonio González Velázquez. Pintor de Cámara de Su Majestad 1723-1792. Madrid, Antiqvaria, 1999, pp. 54-55 and 248-249, doc. 36.