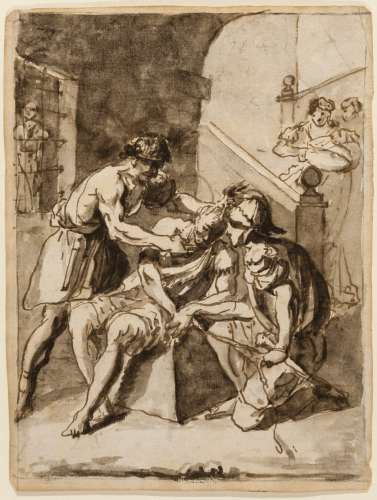 In the second half of the 18th century and in the context of the significant growth of the graphic arts in Spain, saints became an important subject, not only for book illustration but also in the form of individual prints based on different religious texts. One example is the Flos Sanctorum by Ribadeneyra, for which it was “proposed to depict all the [saints] of the year […].” 1 In the light of this idea by the engraver Juan Antonio Salvador Carmona (1740-1805), between 1771 and 1773 the artist Antonio González Velázquez produced a series of drawings to illustrate The Saints of the Days based on the description of each one in the Flos Sanctorum. The prints were offered for sale between August 1779 and June 1780 at Bayló’s bookshop on calle de Carretas in Madrid. Both artists anticipated that this would be a profitable project but only the prints corresponding to the 31 days of January and the first 10 days of February were in fact printed, “as sales did not cover the cost of such a lengthy project.” 2 The price of 2 reales each, which was high for the period, may explain the lack of success. Carmona and González Velázquez had not taken this into account; both artists were at the height of their careers at this period and had not even contemplated a publishing failure.

Antonio González Velázquez came from an important family of Madrid painters of the second half of the 18th century, together with his brothers Luis and Alejandro. 3 Having trained at the Real Academia de Bellas Artes de San Fernando, in 1746 his exceptional gifts earned him a grant from the Study Committee in Rome. There he became a notable student of Corrado Giaquinto whose style of drawing influenced his own. In 1752 González Velázquez returned to Spain, to the Basilica of El Pilar in Zaragoza where he was commissioned to paint the fresco decoration of the dome in the Santa Capilla. The success of this work meant that he was in demand in Madrid, giving him access to both the royal palace and the Academia where he was made an academician of merit in 1753, director of painting in 1767 and director in 1787.

González Velázquez’s series of preparatory drawings for etchings are striking for their technical freedom, which is uncommon in designs for prints as these normally emphasise straight lines for the figures and parallel ones for the shading in order to facilitate their transfer to the copperplate. However, in his drawings for the Saints of the Days González Velázquez produced designs that reveal both his capacity for narrative invention and his unique technique, combining grey-brown ink applied in sinuous lines with wash, the latter used to enliven the shadows and model the figures. While these drawings are inspired by the Flos Sanctorum it was the artist himself who chose which saint would be used for each day (given that each date has more than one saint) and also which episode from that saint’s life would be depicted as many of them had extremely complex legends. This is the case, for example, with the present saint, Hippolytus. There are in fact various saints of that name and the feast day of the one depicted by González Velázquez is 13 August. The Flos Sanctorum recounts that Hippolytus was a Roman jailer who guarded Saint Lawrence. 4 Having been converted to Christianity by that saint when he witnessed his miracles, Hippolytus was entrusted with burying him after his martyrdom. When the Emperor heard of this he had Hippolytus arrested, beaten on the mouth with a stone and stripped of his white robes of a newly baptised Christian with the aim of forcing him to renounce his faith. When physical punishment failed to achieve this, the Emperor confiscated all Hippolytus’s possessions and seized his family who were also recent converts. Among them was Concordia, who had been Hippolytus’s wet nurse. She defended him and was whipped to death, thus also attaining martyr status. All other family members had their throats cut in the presence of Hippolytus, who was finally tied to wild horses’ tails, dragged along by them and torn apart. The saint’s complex martyrdom is brilliantly narrated by González Velázquez who identifies Hippolytus by setting the scene in a prison and by referring to his habitual employment through the presence of prison bars in the middle ground on the left. On the right, the woman holding a baby and descending the stairs is Hippolytus’s wet nurse Concordia whose martyrdom is so closely connected with his. The saint himself is present in the foreground sitting on a large stone block while one of his torturers holds him by the hair, a gesture also used in the artist’s preparatory drawing for the print of Saint Julian (fig. 1) in which that saint is held by the hair before being decapitated. González Velázquez also includes the detail of a torturer bringing an object close to Hippolytus’s mouth, which is undoubtedly the stone used to strike his teeth. A second torturer kneels on the right, restraining him with ropes. The window with bars and the three figures create a compositional diagonal that allows each element in the scene to be read in succession with the right-hand torturer leading the viewer’s eye towards the wet nurse in the middle ground, thus introducing a different iconographic episode.

The reverse of the sheet (fig. 2) has various rapid sketches by the artist. Executed in grey-brown ink, they may be studies for other compositions given that this drawing was never produced as an etching. The figure in the upper centre seems to be a triumphant Apostle James mounted on horseback and holding a large cross in his left hand, while the figure in the lower right corner could be Christ gathering up his clothes. On the left is a very schematic study for an arm.