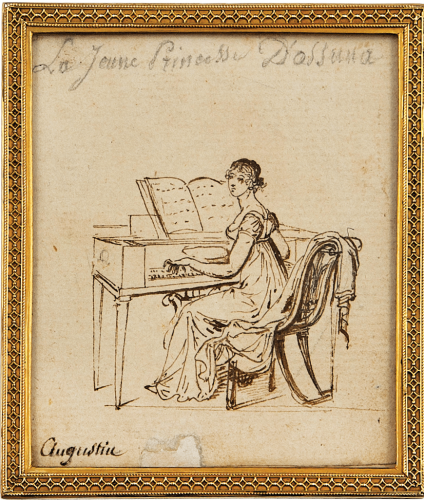 One of the most notable families with regard to its patronage of the arts and its interests in economic, scientific and cultural fields in late 18th– and early 19th-century Spain was that of the 9th Duke of Osuna, Pedro de Alcántara Téllez-Girón (1755-1807) and his wife, María Josefa Pimentel, Duchess of Benavente (1752-1834). The couple funded archaeological excavations, offered their protection to artists such as Goya, writers such as Ramón de la Cruz and musicians including Boccherini and Barbieri. The Duchess also pursued various interests considered typically French at the time, such as reading, playing the piano and letter writing. 1 The couple passed on their passion for music and the visual arts to their five children, some of whom were notable practitioners including the second daughter, Joaquina Téllez-Girón, Marchioness of Santa Cruz, who became an honorary academician at the Real Academia de Bellas Artes de San Fernando (fig. 1). 2 The eldest daughter, Josefa Manuela (1783-1817), who most resembled her mother, was educated with the same emphasis on art and music. Her passion for the arts is reflected in this drawing, which was subsequently painted as a miniature by the French artist Jean-Baptiste Jacques Augustin.

The artist handles the pen and sepia ink with a confident, fluid line, bringing to life the furniture in the room, the piano and the music, while the “young princess of Osuna”, as the artist terms her, is depicted with shorter and more rapid lines, some of them much more dynamic and undulating in order to convey movement, for example those that create the hands on the piano and which suggest that the subject is playing a piece of music. As noted above, this drawing is a preparatory study for a miniature by Augustin (fig. 2). 3 Signed and dated 1799, it was painted when the Marchioness was sixteen, shortly before her marriage in 1800 to Joaquín María Gayoso, 11th Marquis of Camarasa, from whom she took her title. There are differences between the drawing and the final work, such as the position of the face, which is turned more towards the viewer in the miniature as if to offer a better view of the sitter’s features; the format, which is full-length in the drawing but only continues to the knees in the miniature; and the setting, which is completely neutral in the drawing while the miniature includes a gallery with a column and a small landscape in the background. The drawing – which was probably executed from life during one of the visits that the Duke and Duchess of Osuna must have made to Paris with their daughter as there are no references to Augustin’s presence in Spain – reveals the artist’s detailed working method based on numerous preparatory studies prior to the realisation of the final work. 4 In fact, there is another surviving drawing for the painted miniature of the Marchioness of Camarasa on a larger scale and with an almost identical composition 5. It also points to the status of this French artist and his fame, which brought him the commission for a portrait of one of the daughters of the Duke and Duchess of Osuna who at this period counted on the services of a great miniaturist, the Dutch artist Guillermo Ducker, described by Leandro Fernández de Moratín as “the most outstanding miniaturist that there was in Madrid.” 6

Jean-Baptiste Jacques Augustin was one of the most outstanding miniaturists of the late 18th and first third of the 19th century, together with Isabey (1767-1855) who was also French. Augustin trained in Nancy with Jean-Baptiste Claudot and arrived in Paris in 1781 where his skills as a painter of miniatures made him extremely popular among the aristocracy, the bourgeoisie and the revolutionaries. Augustin’s ability to capture the particular physical characteristics of his sitters, his realism and soft, highly finished style in which the brushstrokes are completely invisible to the eye, earned him the praise of the public. In addition, a large number of artists wished to study with him, including Alexander Delatour who became painter to William I of the Netherlands; Aimée Zoé Lizinka de Mirbel, who replaced him in the service of Louis XVIII; and the Spaniard José Udías. In 1800 Augustin married one of his pupils, Pauline Ducruet, who also painted miniatures in a style very close to her husband’s. While Napoleon particularly appreciated Isabey’s portraits in 1806 he also appointed Augustin official painter to the Imperial court. The artist’s status survived the change of regime and after the Bourbon restoration in 1814 he became painter in ordinary to Louis XVIII, who awarded him the Legion of Honour in 1821. Augustin’s career reached its peak in 1824 when the monarch appointed him “first miniature painter” to the court. 7