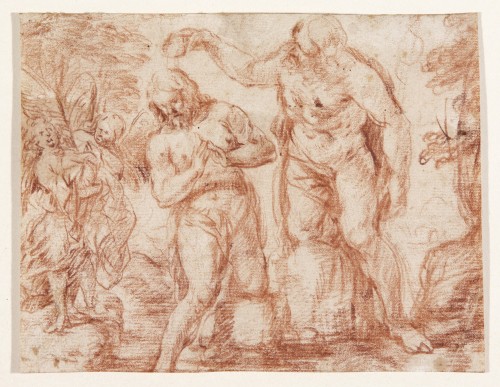 Noble by descent, Juan Carreño de Miranda was born in Avilés in 1614 according to his first biographer, Lázaro Díaz del Valle. He receives his earliest training from his uncle Andrés Carreño in Valladolid, but his family moves soon to Madrid, where he becomes an apprentice in the art of painting under Pedro de las Cuevas and Bartolomé Román. As indicated by the specialists, Carreño will undoubtedly become, after the death of Velázquez, in the most renowned painter of the time in Madrid. His earlier religious works, allow him access to the Palace, above all after testifying in 1658, on behalf of its Court Painter to bestowing him the title of knight of the Order of Santiago.

As of 1659, he collaborates with the Bolognese fresco painters Angelo Michele Colonna and Agostino Mitelli in the vault´s decoration of the Hall of Mirrors of the Alcázar of Madrid. Although this work has been destroyed in the palace´s fire of 1734, a conserved drawing shows a detail of the ceiling´s decoration (Madrid, Royal Academy of Fine Arts of San Fernando). Shortly after, together with Colonna and Francisco Rizi they will undertake the fresco decorations of the vault of Saint Anthony of the Portuguese, one of the Spanish mural paintings´ masterpieces of the 17th century.

The rise of Carreño´s influence after the death of Velázquez in 1660, grants him the position of Royal Painter in 1669, reaching his zenith in 1671 when he is appointed the role of First Court Painter. In this way, the official image of the regent Queen Mariana of Austria and of King Charles II will be dictated under his brush strokes. His paintings of the royal portraits give him access to the highest circles of the court, executing in this way one of his masterpieces, the Portrait of Duke of Pastrana in the Prado (1666-1670). This success will also highlight his religious art work, outstanding the group of paintings, destroyed in 1936, carried out once again together with his fellow court painter Francisco Rizi, for the Saint Isidro chapel in the church of Saint Andrew (1663-1663). Outside of Madrid he accomplishes another of his fundamental works, the Founding of the Trinitarian Order, currently conserved at the Louvre Museum in Paris. During the last years of his life his palette will become increasingly lighter and more colourful, influenced by his profound knowledge of the Venetian paintings and the great Flemish masters of the 17th century, such as Rubens and Van Dyck. This is clearly discernible in the Baptism of Christ of the Madrilian Church of Santiago (c. 1682), in which Tintoretto’s influence is perceptible. He dies in Madrid in 1685[1].

The former attribution of the actual drawing to Giulio Romano is completely erroneous. The pencil inscription on the back of the paper seems to have been certainly motivated by the similarity with the “Baptism” scene painted by Raphael and his workshop at the Vatican Loggie. These scenes were immediately printed and became widespread throughout Europe by the Italian and his team, to which Giulio Romano belonged to. Therefore, it is possible that the owner who handwrote the inscription «Juilio Romano» was aware of some of these etchings.

The drawing, with lines on both surfaces, represents both studies for the Baptism of Christ done in red chalk, a technique frequently used by the artist throughout the course of his carreer. In the front side of the paper, in a close-up, appears Saint John the Baptist anointing Christ, while at the left side of the composition two angels can be seen carrying their clothing. The scene is contained by a series of trees. The whole group, where one can observe once again Tintoretto´s influence, is executed quickly, with layers of red chalk emphasizing the shadow areas. The figure of Christ leans his left knee on a rock and joins his hands in prayer while being anointed. The representation on the back, which is more in a sketching style, is concentrated on two main figures, introducing major changes as regards to the arrangement on the other side of the drawing. In this way, Saint John the Baptist this time, leans his left knee on a rock; as to the figure of Christ that appears more elevated, even though his hands are joined as is in the representation on the other side. At the right side of the composition, he barely sketches some lines in red chalk, which seems to be the scene that is inserted in the landscape. Carreño painted throughout his artistic trajectory at least two paintings with the Baptism of Christ theme. The one of better quality is conserved in the church of Santiago in Madrid, and is dated around 1682. Another version with the same composition is preserved in a private collection, signed and dated 1682, which is reduced in the lower part. Along with these, a small canvas (58,8 x 50 cm) conserved in the Hermitage Museum of Saint Petersburg which is considered as a preparatory sketch of the former ones, although specialists such as Pérez Sánchez discard the attribution to Carreño[2]. Lastly, the Provincial Museum of Guadalajara conserves a Saint John the Baptist in the desert also attributed to the painter, where a new representation of the Baptism can be seen in the background of the composition, at the lower left part of the painting.

Several drawings are conserved which were conceived for the Baptismal theme. The one of better quality is found in the Prado Museum and shows a very detailed study using black pencil and red chalk for a figure of Christ[3]. Along with this one it’s worth mentioning the other two, the ones preserved at The Getty Museum (Los Angeles) and at the Gabinetto Disegni e Estampe degli Uffizi in Florence, both done using the same technique as the one conserved in the Prado. On the front side of the drawing an angel figure kneeling down is depicted, while the back of the drawing a nude Christ with the hands crossed over his chest is represented[4]. All these drawings show diverse variants on the Baptismal theme, and the only one that seems to be directly related with some of the conserved paintings is the piece at the Uffizi. This one shows noticeable similarities with the canvas of the church of Santiago in Madrid, although the figures appear inverted in the drawing regarding the painting. As regards to the sketch in concern, its most direct identification is with the canvas of Saint John the Baptist from the Guadalajara Museum, as in both cases the figure of Christ is represented with the hands joined in prayer. All these drawings demonstrate to what extent Carreño worked his paintings´ compositions thoroughly, analysing in great detail each one of the gestures and positions for his figures.