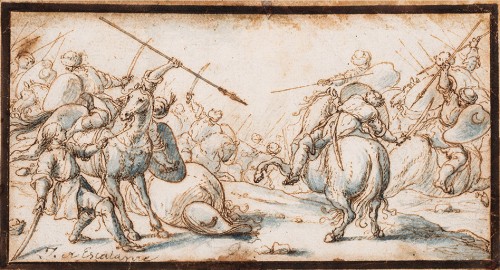 The decade of the 1660s saw the deaths of a number of young artists who would not only have been the successors to great masters such as Diego Velázquez and Alonso Cano but would also have constituted the generation of the final years of the Golden Age. Among those exceptionally talented and promising figures were Mateo Cerezo (1637-1666) and Juan Antonio de Frías y Escalante. The latter was born in Córdoba and after an initial period of training in his native city, possibly in the studio of Antonio del Castillo, went to Madrid in the late 1640s. There he entered the studio of Francisco Rizzi and from that point onwards was professionally active at court. Escalante’s first known work is an Episode from the life of Saint Gerard painted for the monastery of the Barefoot Carmelites in Madrid but now lost.[1] This work must have gained him renown as from that point onwards the artist received numerous commissions from churches and religious houses in Madrid. The most notable of his career dates from 1667 when he was entrusted with the execution of seventeen paintings for the sacristy of the monastery of the Shod Mercedarians in the capital (now in the Museo del Prado). Just a few years later and shortly after he had started to work with his master on a new monument for Toledo cathedral, Escalante succumbed to tuberculosis before he had fully developed an artistic maturity that promised great achievements.

We know from Palomino that Escalante was “a fine draughtsman” and that for some of his compositions he made use of prints, especially after paintings by Tintoretto and Veronese, artists whom he particularly admired.[1] His works clearly reveal an interest in those Venetian painters, not just in the manner of arranging the figures but also in their poses. This appreciation is also evident in the present drawing, in which the dynamism of the battle scene recalls the one to be seen in the middle-ground of Tintoretto’s Abduction of Helen (fig. 1), a work that had been in the Spanish royal collection since 1651 when Luis de Haro gave it to Philip IV.[2] In his canvas Tintoretto set the episode recounted in Homer’s Illiad in the heat of a battle in which the foreground includes a ferocious combat at sea over Helen’s abduction while in the middle-ground the solid figures gradually dissolve into the depiction of an engagement between Turks and Christians. Tintoretto’s device of transforming the figures into almost arabesque-like forms which convey movement is adopted here by Escalante: in the foreground he depicts the horses and riders defined through deft strokes of pen and iron-gall ink and light, blueish washes which define the shadows, while further into the pictorial space he dissolves the figures to the point of merely suggesting their presence through a haze of waving lances. In addition, the artist almost literally copied the figure of the mounted Turk seen from behind and defending himself from the enemy with his shield who is located in the middle of Tintoretto’s composition. The same figure would also seem to be present on the right of the drawing in the form of a powerfully-built horse on which a turbanned Turk with a Saracen sword with a curved blade is charging at other riders. The drawing’s highly finished, refined appearance and the fact that it is signed by Escalante at the lower left corner possibly indicates that it is a presentation drawing for a large-scale painting. There is in fact another drawing of the same technique, size and subject and with a very similar composition (fig. 2), suggesting that the artist may have been preparing a series of large-scale works for a commission of which sadly nothing is now known.[3]

Battles are not a common subject within Escalante’s oeuvre although some of his canvases do include such scenes or episodes with pronounced movement. For example, in The Converstion of Saint Paul (Museo Cerralbo, inv. 04271) he experimented with the movements of the horses and figures in a way very similar to that seen in the drawings discussed above. This suggests that some of his sketches may have been related to works of a different type, as in the case of the drawing in the Rodríguez Moñino collection.[4] That work, which is smaller than the present one and makes use of a freer, more sketchy technique, would not seem to be a study for a composition as a whole but rather a part of one in which some type of military action is taking place, indicating that Escalante studied subjects of this type both for paintings of battle scenes and for their inclusion in compositions of other kinds. For example, in 1667 and as part of the above-mentioned series of oils for the Shod Mercedarians, the artist depicted a biblical subject which Cruzada Villamil described as: “Warriors terrified by the appearance of a beacon surrounded by glowing light in the sky; in the background two armies fighting.”[5] The painting passed to the Museo de la Trinidad and was destroyed during the Spanish Civil War, for which reason it is not possible to determine if any of the above-mentioned drawings were preparatory for its composition.

[4] The principal monographic study on Escalante to date does not include any reference to commissions or paintings by the artist on that subject. See Delgado (2001).