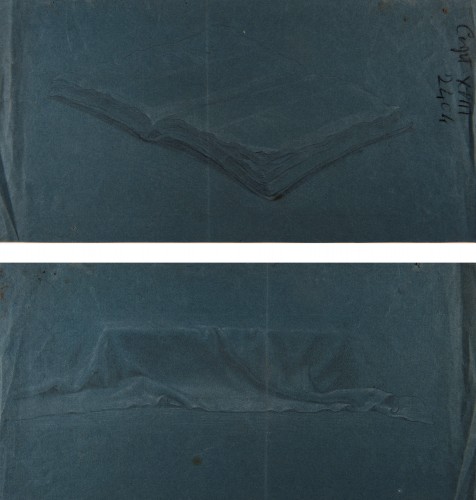 Francisco Bayeu was one of the most important Spanish artists of the 18th century. Within his extremely extensive oeuvre, in which he was most notable as a fresco painter, Bayeu produced a large number of drawings. The inventory drawn up after his death includes a very large quantity of life studies, academic nudes, preparatory studies for paintings and other types of drawings. 1 All of them clearly manifest the very considerable influence of Mengs on his work and Bayeu can be described as the leading follower of that artist’s academic precepts. According to Ceán Bermúdez, few equalled Bayeu in the “correctness of his drawing, the simplicity of the poses, the fine organisation of the composition, the expression, contrast between the groups, chiaroscuro, colour and harmony […].” 2 Born in Saragossa to a family of the local nobility, he trained in his native city in the workshop of Juan Andrés de Merclein before moving permanently to Madrid in 1763 as the assistant to Antonio Rafael Mengs. At this point Bayeu began to collaborate on the numerous decorative schemes, particularly frescoes, which were being executed for various royal residences at that time. As a result of these projects he was appointed Court Painter in 1767. Together with these commissions for the Court, Bayeu also produced work for the Basilica del Pilar in Saragossa and for Toledo cathedral. In 1788 he became director of the Academia de Bellas Artes de San Fernando in Madrid. Working tirelessly during these years, he died in Madrid in 1795.

The two drawings presented here are studies for elements commonly used in large-scale compositions, in this case a book and a step covered with a cloth. Both are executed in black chalk on blue paper, a technique and support typically employed by Bayeu for his sketches, with the highlights defined in white chalk in order to create a sense of volume. Both images are striking for the naturalism and restrained simplicity in the depiction of the objects.

The sketch for the book could be related to a large number of paintings by Bayeu in which this element appears. In general, the presence of bibles, texts, pages with writing on them, etc is a frequently recurring element in allegorical and symbolic scenes. However, the position of this volume seems to suggest that it could be a preparatory study for the important commission for the canvas of The Exaltation of the Sacred Heart of Jesus for the parish church in Pedrola, Saragossa. 3 In 1779 the Duke of Villahermosa, Juan Pablo de Aragón y Azlor, offered up a vow to restore and enlarge the old parish church in Pedrola, a foundation under his patronage, if his sickly son reached the age of five. The child survived and in order to fulfil his promise the Duke contracted some of the most important artists of the day. The architect Gregorio Sevilla designed the crossing and presbytery; Juan de Villanueva designed the stucco high altar; and Francisco Bayeu was commissioned to execute some for the paintings for the altarpieces, which he completed around 1788. His contribution consisted of two canvases, the above-mentioned work and The Assumption of the Virgin. Bayeu produced a large number of preparatory studies for the carefully composed and complex stepped composition of The Exaltation, of which the Museo del Prado now has those of the Virgin, Saint Bernard, Saint Luigi Gonzaga, Saint Ignatius Loyola, the head of a saint and a study of four hands. 4 In addition, Bayeu produced a study of the definitive composition now in the collection of the Duchess of Villahermosa. 5

The drawing on the reverse of the present sheet, depicting a step covered with a cloth, is more difficult to relate to a particular work. It is primarily a magnificent study of light, shade and volumes for subsequent use in a painting. Bayeu frequently made use of stepped compositions in his paintings, for which reason an analysis of the fall of drapery on a step would be a motif to which he devoted considerable attention.