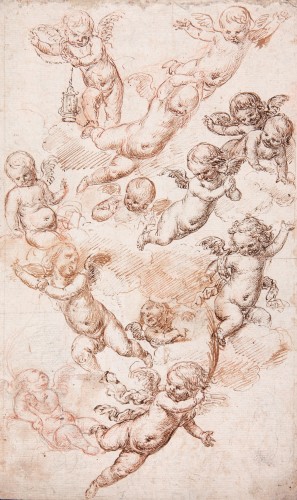 As noted in the entry on the previous drawing, Antonio de Pereda was one of the leading names in 17th-century Spanish painting. His career at court was brought to a premature end by the death of his protector, the Marquis de la Torre, in 1635. After the death of the Marquis, Pereda primarily focused on religious compositions.

In the preparation of the numerous paintings the artist produced over the course of his career he frequently made use of preparatory drawings, prints, books of engravings or plaster casts, many of them acquired at the posthumous sales of the possessions of other painters of this period, such as Vicente Carducho and Antonio Puga. 1 In addition, Pereda executed preliminary sketches on canvas or preparatory drawings. Works of this type were frequently to be found in painters’ studios as models or repertoires of expressions to be used in the final works. One of Pereda’s most important paintings of this type is the Study of four Heads (Madrid, Instituto Valencia de don Juan), a remarkable study of the human face, painted on canvas. 2 Pereda used this oil study for faces in subsequent compositions, for example in his Saint Jerome (Vitoria, private collection) and for Abraham in Abraham and Isaac (Dallas, Meadows Museum).

The present drawing is another of study of this type, in this case for the motif of angels, a subject that appears on numerous occasions in Pereda’s works, explaining the wide range of poses and movements to be seen here. They include small angels asleep, with palm branches, with incense burners, holding up an object, praying, playing together, etc. Some of the angels in this drawing are easily identifiable in finished works by the artist including the one at the lower left, standing and holding something. A similar angel is holding up the crown on the right of the Immaculate Conception in the Musée des Beaux-Arts in Lyon.

Many of Pereda’s figures of this type reveal his dependence on Flemish models taken from prints by Jan Saenredam, Jan Muller and Jacob Matham based on compositions by Goltzius, once again indicating the artist’s use of books of prints as one of his sources. The present drawing is not the only known study of angels as the Museo del Prado has two more (inv. nos. 172 and 173) executed in a notably similar technique and depicting a series of child angels in various poses and with different expressions. 3 In addition, there are two canvases depicting similar motifs in a private Madrid collection in one of which is an angel similar to one in the present drawing, flying in a diagonal direction in the centre of the composition with its hands joined in prayer.

The profusion of angels that filled Baroque paintings mean that these figures were frequently the subject of sketches and preliminary studies both in Spanish and Italian art in the 17th century. They were used to create a sensation of movement, sumptuousness and theatricality in Baroque religious compositions. Examples by other artists of the period include Flying Angels by Alonso Cano (Biblioteca Nacional, Madrid) and preliminary sketches of flying angels by Juan Carreño de Miranda (Biblioteca Nacional and Museo del Prado). The existence of such works indicate that the purpose of their creation on the part of the painters in question was to make available a varied repertoire of figures and poses that enabled them to rapidly compose the religious paintings commissioned from them.

The technique deployed here by Pereda is notably similar to the one deployed in his drawing of Tobias healing his Father also in this catalogue. Pereda makes skilled use of a sharp red chalk to trace the overall lines of the composition then adds the final forms with pen in black and sepia ink. The line is more precise and detailed in the angels, with their perfectly defined and clearly differentiated faces and plump, soft bodies, while the setting of celestial clouds is lightly suggested through rapid zig-zagging lines, a device used by other artists of the Madrid school in the second half of the 17th century.