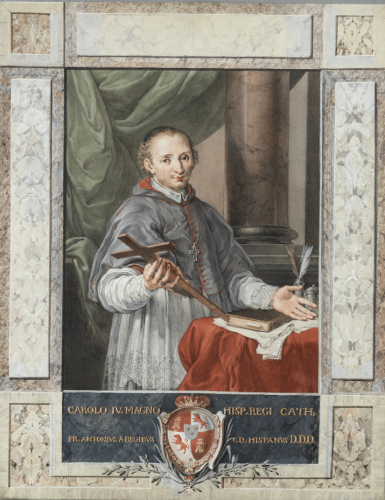 The number of paintings and prints of the Venerable Juan de Palafox known in the present day is surprising. While he was already the subject of numerous portraits in his own lifetime in the 17th century, by the third quarter of the next century, at the time of the process of his beatification, this quantity became remarkable, particularly with regard to the prints that disseminated his image. One of the artists involved in this promotion of Palafox’s figure – rather than his specific appearance, as this text will discuss – was the Roman Tomasso Maria Conca. Conca was one of the younger sons of the eleven children of Giovanni Conca and Anna Laura Scarsella di Castro. He studied painting with his father and with his celebrated uncle Sebastiano and in 1770 entered the Accademia di San Luca in Rome. It was at this period that he joined the circle of the Neo-classical painter Anton Raphael Mengs with whom he is thought to have worked on the decoration of the Villa Albani, becoming a specialist in decorative painting inspired by classical motifs.[1] This led to the commission from Prince Marcantonio Borghese to execute the paintings in the Egyptian Room and the Room of Silenus in the Villa Borghese in collaboration with Giovanni Battista Marchetti, a project that undertaken between 1775 and 1782. Having completed it, in 1782 Conca was commissioned to paint the most important fresco cycle of his career for the Room of the Muses in the Museo Pio-Clementino in the Vatican palace where he painted Apollo and the Muses (fig. 1).[2] The success of these paintings established Conca as one of the leading figures within Roman Neo-classicism. In 1793 he achieved his most important recognition to date when he was designated “prince” by the Accademia di San Luca. In 1817, by now in the final phase of his career, he executed some of the fresco decorations for the new rooms in the Vatican Museums, including the lunette in the Galleria Chiaramonti depicting The installation of the new paintings gallery in 1817 in the Borgia apartments.[3] [1] Rudolph (1983), no. 199. [2] Pietrangeli (1982), p. 17. [3] Mancinelli (1982), p. 132, fig. 35.

Conca’s fame in Rome undoubtedly explains the commission around 1792 for a work that was not of the type he normally produced, namely a portrait of Bishop Juan de Palafox (1600-1659), who had been elevated to the status of “venerable” in 1790.[1] Juan de Palafox was the illegitimate son of Jaime de Palafox y Mendoza, Marquis of Ariza. After he was acknowledged by his father he was able to study at the universities of Alcalá de Henares and Salamanca. In 1626 he was made a deputy for the nobility in the Courts of Monzón but he was so moved by the illness of an aunt and by his mother’s devoted care of her that he decided to become a priest and was appointed chaplain to the Queen of Hungary, Maria Anna of Austria, sister of Philip IV. Palafox accompanied her on her travels around Europe, visiting Italy, Germany, Flanders and France. In 1639 Philip IV appointed him the new bishop of Tlaxcala in Puebla de los Ángeles (Mexico) where he was notable for his efforts to protect the indigenous population and avoid any forced conversions. From June to November 1642 he briefly occupied the position of Viceroy of New Spain, supporting the access of the Creoles to public posts and proposing a reduction of taxes to help the economy. The year 1643 saw one of the most notable events in Palafox’s life when he had a vision of the Virgin, an episode that would later provide the basis for his beatification and which became a key element in his iconography.[2] Palafox’s notably reformist approach to the society of New Spain made him extremely popular and ensured marked social cohesion. His image, presenting him as a saint,[3] was by now widely disseminated although he rejected such depictions.[4] Nonetheless, his disagreements with the Jesuits meant that he was sent back to Spain in 1653 where he was made bishop of Osma, a position he held until his death on 1 October 1659, after which he was buried in the cathedral of Burgo de Osma. A few years later, in 1666, Palafox’s tomb was opened and his body was found to be uncorrupted, initiating the process of beatification from the diocese of Burgo de Osma in 1666 and subsequently from Puebla de los Ángeles in 1688. In 1726 Benedict XIII signed the decree that allowed his case to be considered in Rome and in 1760 Charles III formally requested the beatification. This period saw the re-publication of Palafox’s complete writings and a large number of prints of him were produced, both to accompany his texts and as individual images. Jesuit opposition to the beatification and their issuing of negative printed images of Palafox led to the publication of still further positive ones of him. The support of both the Spanish Crown and of important individuals contributed to the large number of images produced.[5] However, the French invasion resulted in the suspension of the process and it was not until 5 July 2011 that he was finally beatified.

The present drawing can be understood in this context. With its meticulous, precise draughtsmanship, soft, harmonious colours and balanced composition it perfectly demonstrates why Conca became one of the most important Neo-classical artists in Rome. Nonetheless, Palafox’s appearance is quite different to that seen in the other known depictions of him produced during his time as Viceroy of New Spain (fig. 2). This was also the case with other prints of him published at this period, as while the painted portraits show him as having dark hair, a beard and moustache, in Conca’s drawing he has light coloured hair and is beardless. In fact, the intention was not so much to disseminate Palafox’s real appearance as to support the process of beatification that was being launched in Rome at that time. The individual behind the creation of this drawing was one of those most involved in this cause, Fray Antonio de los Reyes (1724-1804), as recorded in the inscription in the space below the image. It was Reyes who had Palafox’s letters published in two volumes in Madrid in 1786 and in four volumes for the Italian edition of 1793.[6] The drawing was reproduced as an engraving by Antonio Capellán, in which Conca is named as the painter and inventor (fig. 3). Despite the precision of the drawn image, undoubtedly created with the intention of being reproduced in print form, some changes were made in the engraving: the dedicatory inscription to Charles IV and the monarch’s coat-of-arms was replaced by the arms and a cartouche praising the Count of Floridablanca, one of the great supporters and promoters of Palafox’s cause.[7] In addition, the marbled frame present in the drawing, which is a typical element in many of Conca’s decorative pictorial schemes, was omitted, thus focusing more attention on the figure. It should, however, be noted that the portrait was executed separately on a sheet of paper which was subsequently adhered to another sheet to which the marbled frame and the dedication to Charles IV was added, for which reason the principal drawing could have been produced first for the purpose of publication then the frame and cartouche added separately for presentation to the king. The image would be used both as an individual print and also for inclusion in the Elenchus actuum heroicorum in Palafox’s Positio published in Rome in 1792.[8]

[5] We know, for example, that Carlo Maratta painted a work that showed “Palafox with Mary on a throne of clouds with the Venerable Palafox in contemplation”. The painting is recorded in Charles III’s will as being the only decoration in the “Second Green Room” in the Royal Palace in Madrid. Fernández Miranda (1988), pp. 37-38, no. 305. Its present whereabouts are unknown.

[6] The scholar Fernández Gracia noted that during Palafox’s time as bishop in Mexico, thousands of images were painted of him and that “his portraits were sold publicly on the streets and many people had them in their homes with great veneration and adornment, located in the centre surrounded by images of canonised saints and in a superior position to them.” This explains why following his return to Spain the Inquisition published an edict banning the painting of such images, and more than 3,000 of them were seized. Fernández Gracia (2000), pp. 400-401.