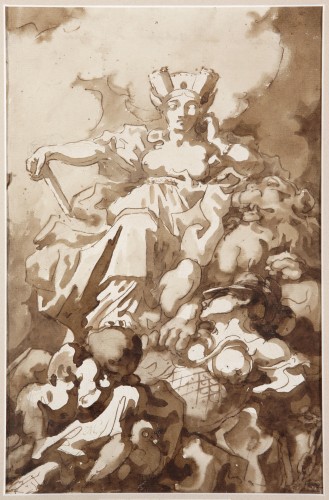 The painter Charles François de la Traverse was among the foreign artists who arrived in Spain in the 18th century and left their mark on the art of that country. Biographical information on La Traverse is scarce but it is known that he was born in Paris in 1726 and began his training there with François Boucher (1703-1770). In 1748 he was awarded First Prize at the Royal Academy of Painting and Sculpture for his painting of Tobias burying the Dead (Saintes, Musée des Beaux-Arts), as a consequence of which he received a three-year grant to study in Rome. There La Traverse’s technique rapidly advanced and he was considered the most promising French artist of his generation, a fact that would gain him further grants and support to fund his time in Rome and his studies. Having completed his training in Rome he went to Naples to see the recent archaeological discoveries at Herculaneum, meeting the Marquis d’Ossun, French Ambassador to Naples, whom he subsequently accompanied on d’Ossun’s transfer to Madrid in 1759. In the Spanish capital La Traverse did not obtain the desired court commissions and thus devoted much of his time to teaching. He was described by contemporaries as a strict master who forbade the copying of prints in favour of the study of classical sculpture and life drawing. 1 Another important facet of La Traverse’s activities in Madrid was the execution of paintings in which, according to Ceán, he developed “all his styles and different manners: to the extent that it is difficult to know in which genre he was best, to judge from the examples by his hand in oil, tempera and miniature, in history painting, portraits, flowers and landscapes. When composing a painting he displayed an enormously fertile imagination and much erudition.” 2 Despite this, the only known proof of his abilities during his Spanish period is the Allegory of the Birth of an Infante (Madrid, Museo Lázaro Galdiano). 3 In poor health, La Traverse returned to Paris in 1787 and may have died there that year. 4

In contrast to the limited number of surviving paintings by La Traverse, a large number of drawings are known. The Biblioteca Nacional in Madrid has around fifty sheets, revealing an artist with a solid classical training but one filtered through a distinctive and unique style. 5 These drawings deploy a Rococo spirit in the soft, undulating lines that are used to create well balanced, solid compositions. Above all they make use of marked contrasts of light and shade created through judiciously applied sepia washes. As a result, collectors in Madrid at the time must have considered La Traverse’s works a “sort of free, relaxed oasis in contrast to growing academic rigour.” 6

The present unpublished drawing depicts Cybele turning Hippomenes and Atalanta into Lions. The pyramidal composition leads the eye along zig-zagging lines, at the top of which is the figure of Cybele sitting on the other figures, which act as her throne. On her head is the crown of towers traditionally used in the iconography of this goddess. She rests her left arm on a lion, another of her traditional tributes, which here represents the transformation of Hippomenes, while the other hand holds a sceptre, another of her attributes. Below the goddess are various haphazardly arranged figures, making it is difficult to discern where one ends and another begins. In this respect the composition is similar to that to be seen in the drawing Allegory of Minerva by La Traverse in the Museo del Prado (D-02601). 7 Among the group of figures that make up Cybele’s throne, seen from left to right, are Cupid lying on his back and symbolising carnal love, a dove alluding to Venus, 8 goddess of love, and finally Atalanta dressed as an amazon, bound by heavy chains and not yet transformed into a lion. The drawing thus represents the punishment of Hippomenes and Atalanta for enjoying the delights of love within the goddess Cybele’s sanctuary. Both were turned into lions, as the Greeks considered that these animals did not mate, thus condemning them to solitary lives. 9

Stylistically, this drawing can be related to a series of sheets by the artist on mythological subjects related to love. Now in the Biblioteca Nacional, they were part of an album belonging to Pedro González de Supúlveda. 10 In some of them, including Venus and Mars (inv. no. 16/30/39), The Judgment of Paris (inv. no. 16/30/40), The Rape of Proserpina (inv. no. 16/30/42) and Pyramus and Thisbe (inv. no. 16/30/43), the pyramidal composition and technique are extremely close to the present work. This is also the case with regard to the manner of drawing the figures, which are created from sinuous lines in pen with the lights and shades suggested through lightly applied sepia wash. The dimensions are also comparable, given that the drawings in the Biblioteca Nacional measure approximately 300 x 255 mm, in other words, almost the same as the present sheet by only a few centimetres. It can therefore be suggested that the present drawing may have been part of this series of mythological drawings on amorous-mythological themes and was thus produced at the same time, during La Traverse’s Spanish period when the artist was at the height of his creative powers.

[7] Catalogued in the Museo del Prado as an Allegory of Minerva, but in fact an Allegory of the Marriage of Charles IV and María Luisa who are depicted on the goddess’s shield. The composition was engraved by Mariano Salvador Carmona in 1764 when Charles and María Luisa were still Prince and Princess of Asturias. Arnáiz, José Manuel, Antonio González Velázquez. Pintor de Cámara de Su Majestad 1723-1792. Madrid, Antiqvaria, 1999, p. 66, cat. no. 66b.

[8] In the Metamorphoses (Book X, 4) Ovid recounts how Atalanta would only marry a man who defeated her in a race, as an oracle had prophesied. Hippomenes asked the help of Venus who took pity on the lovesick young man and came to his aid. After his victory, however, Hippomenes forgot to thank Venus who furiously aimed her darts of love at the newly-married couple as they passed near the temple of the goddess Cybele.