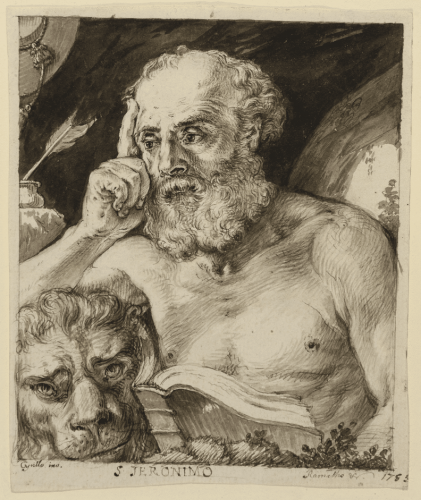 Saint Jerome is considered one of the principal figures of both the Catholic as well as the Orthodox, Lutheran and Anglican Church due to his learning and dedication to translating the Scriptures, for which reason he is one of the most frequently depicted Fathers of the Church. The present drawing shows him from waist up, bare-chested and with a pensive expression, his index finger against his brow. Both the setting and attributes that accompany Jerome correspond to elements in his life. Thus the space in which he is located is the inside of a cave, in a clear reference to his life as a hermit; the cardinal’s hat refers to Jerome’s status as a Doctor of the Church; the pen, inkwell and book to his erudition and his vast endeavour of translating the Bible into Latin; and finally the lion is the one that supposedly accompanied him during his years of penitence after Jerome removed a thorn from its paw. The faithful animal remained with him until his death. All these iconographic elements characteristic of Jerome and which identify him are present in this drawing. Its highly finished and precise technique, making use of fine but confident pen strokes to define the physical features of both the saint and the lion, and the lines of cross-hatching combined with wash to create the shadows as well as the use of a darker ink to give depth and bring the pictorial space to life would have allowed the drawing to be easily transferred to etching. From the two inscriptions in the lower part it can also be deduced that this drawing was made as the basis for a print. In addition, the inscriptions provide the name of the artist, the Portuguese Cyrillo Volkmar Machado, and of the name of the engraver, Joaquim José Ramalho, a graduate of the Aula del grabado in Lisbon.

Cyrillo Volkmar was born in Lisbon at a time when Portuguese art was in a transitional period between the Pombaline style and the start of the Neo-classical generation. Volkmar first embarked on his training in his native city then left for Rome to further his knowledge of painting. On his way he passed through Évora and Seville and in the latter encountered the Escuela de Nobles Artes, directed by Juan del Espinal, where he studied geometry. Having arrived in Rome, Volkmar focused on a study of the great masters of the past then returned to Lisbon in 1777 where he made his way in the Portuguese art world as a very active designer of architectural projects and theatrical designs. He also achieved fame as a fresco painter through his work for the palace of the Marchioness of Bella and above all for the ceiling decorations in the palace of Mafra, the latter earning him the title of Painter to his Majesty in 1796. Volkmar’s most important contribution to the history of Portuguese art was, however, his activity as an art historian. 1 His book Colecçao de memòrias relativas às vidas dos pintores, e escultores, arquitetos e gravadores portugueses, e dos estrangeiros, que estiveram em Portugal offered a compilation of all previously known texts on the lives of artists available in Portugal at that date, including his own biography. 2 This project earned him the nickname of the “Portuguese Pilkington” or the “Portuguese Ceán Bermúdez”. 3

In his book Volkmar refers to the engraver Joaquim José Ramalho who was one of the members of the Aula del grabado founded in Lisbon in 1769 in association with the Royal Printers. Its first director was Joaquim Carneiro da Silva who had trained in engraving in Brazil and Rome. Carneiro taught a large number of artists, including Ramalho. Little is known of the latter other than the few words that Volkmar devoted to him in his Colecçao de memòrias when referring to the students of Carneiro’s Aula: “Joaquim José Ramalho, que morreo moço en 1795, sendo tambem Pintor”. 4 Few examples of his skills as an etcher have survived, among them a print of Saint Sebastian, 5 a King David based on a drawing by his master Carneiro da Silva (fig. 1), and an Allegory of the Death of the Prince don José printed at the Tipografía Regia in Lisbon in 1790 and possibly one of the last examples of the artist’s work. 6

The print that was very probably made after the present drawing of Saint Jerome has yet to be located but it could have been made to illustrate one of the numerous sacred texts published by the Royal Printers in Portugal at this period. It it clear that Cyrillo Volkmar put considerable effort into the creation of his drawing, looking to the work of other artists and also making preparatory studies for the principal figure. Jerome’s pensive expression and gesture can thus be compared to Dürer’s depiction of the saint, painted around 1521 for Rodrigo Fernandes de Almada, the Portuguese factor in Brussels who arrived in Lisbon during the reign of Joao III (1502-1557), and now in the Museo de Arte Antiga in Lisbon (inv. no. 828 Pint). For the saint’s weather-beaten face with its short beard Volkmar drew various studies of old men, such as the red chalk example now in the Biblioteca Nacional de Portugal (fig. 2).