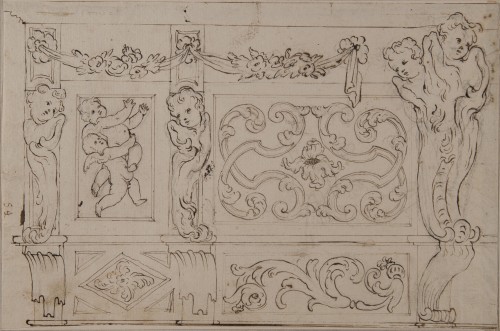 On the threshold of Neo-classicism, a new style characterised by symmetry, regularity and order, Spain saw the final flourishing of the Baroque. Its free approach and elaborate, sumptuous nature had little to do with the manifestation of that style that had prevailed in the 17th century, with its sinuous but controlled forms. Late Spanish Baroque, which continued in use for much of the first half of the 18th century, was an excessive type of art. Characteristic examples include the altarpieces and other works generally termed churriguerescas, which make use of a wealth of Salomonic columns covered in grapes and vine tendrils and a large number of figures and decorative motifs, leaving no point of rest for the eye. Others, such as the present drawing, fall more within the European Rococo style due to the profusion of rocailles (the word from which the term Rococo derives), a notable horror vacui and a proliferation of purely decorative motifs.

Within this style associated with the European Rococo, one figure in Spain stands out from the rest: the architect and sculptor Narciso Tomé. He remains one of the most enigmatic figures in Spanish art due to the fact that nothing is known of his training and possible contacts in Europe. 1 The scant available information on Tomé indicates that he was born in the city of Toro (Zamora) around 1694. Son of the sculptor and joiner Antonio Tomé, he must have learned these skills from his father, as did his brothers Andrés and Diego, with whom he founded a type of company that worked in the areas around the province of Zamora. Their fame gradually grew and in 1715 they were commissioned to produce a new entrance door for the University of Valladolid. It remains a mystery as to how a family of wood sculptors masterfully sculpted a marble doorway, but the success of this project brought them praise and recognition in Spain. 2 As a result, in 1721 Narciso Tomé was appointed Head of Works at Toledo cathedral, replacing Teodoro Ardemans who had held the post since 1691 but who had fallen ill. Tomé accepted the commission to work on the project for the retro-choir of the cathedral, which the Chapter had long had in mind. After just three months, in June 1721 he presented his designs for this work, which were approved with unanimous satisfaction. 3 The most striking of them is for the Transparente, a break in the wall of the apse designed to allow light to fall on the tabernacle. It is conceived in terms of a two-storey altarpiece, with an oculus between the two levels that symbolises the sun with its bronze rays surrounded by figures. As a whole, the design is an apotheosis of forms in movement, finely sculpted marbles and jaspers, and gilt bronzes with narrative reliefs. Most striking, however, is the large number of angels in the most varied range of poses, many of them solely consisting of a winged head with the body suggested by a rocaille. These smiling, chubby, playful and gentle beings present an entire repertoire of expressions and poses, all sculpted with the greatest technical mastery.

Comparable heads of small angels with rocaille bodies are to be seen in the present drawing. They also appear in other drawings by Tomé including the Project for the Altarpiece in the Chapel of San Ildefonso in Toledo Cathedral (Madrid, Biblioteca Nacional, inv. no. DIB/18/1/7196) and one for an Altarpiece of Saint Benedict (Madrid, Biblioteca Nacional, inv. no. DIB/14/45/75).

In addition, the small angels playing at lifting each other up in the present drawing are notably similar to a pair on the Transparente in Toledo. This universe of overflowing forms of such a distinctive nature has led to the attribution of the present drawing to Narciso Tomé, with the suggestion that it may be a sketch for a decorative detail of that architectural element. So striking and masterful was the Transparente, that a contemporary was led to praise it in the following terms: “Such continuous movement/In its making must be admired/One does not know if one is looking/At the top or the bottom/Faith gives it life/Love gives it lightness;/And while it has fully returned payment/In terms of completed skill/It is still not clear if the work/Is finished or has just begun.”