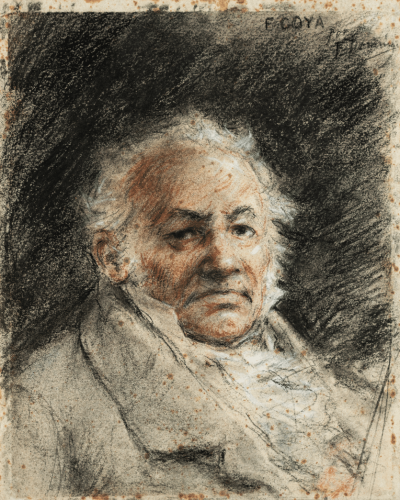 Francisco de Goya (1746-1828) was a key reference not just for the various artists who briefly overlapped with his lifetime, such as Leonardo Alenza (1807-1845) and Eugenio Lucas Velázquez (1817-1870), but also for the later Spanish artists who saw him as an archetype of modernity. Among those who took him as their model was Francisco Domingo Marqués, whose work includes numerous references to Goya.   Domingo Marqués was born into a humble family in Valencia in 1842. At an early age he began his artistic training at the Escuela de Bellas Artes de San Carlos in his native city where he was taught by Rafael Montesinos. In 1863 he moved to Madrid and enrolled at the Academia de Bellas Artes de San Fernando where his teachers included Federico de Madrazo and Carlos de Haes. During those years he regularly visited the Prado and copied works in the collection, including Rubens’s Garden of Love and Goya’s 2nd of May in Madrid, 1808, [1] revealing his early admiration for the latter. In 1867, having been awarded various prizes at the National Exhibitions of 1864 and 1867, Domingo Marqués returned to Valencia where he produced a number of decorative schemes. His career was fully established when he was awarded the gold medal at the First Valencian Regional Exhibition for his painting A Dire Deed in the Seventeenth Century.[2] This also allowed him to secure a grant to study in Rome where he was taught by Eduardo Rosales. After two years there he returned to Valencia where he was appointed a professor at the Escuela de San Carlos de Dibujo al Natural, Antiguo y Paisaje. In 1871 he presented four canvases at the Fine Arts Biennial in Madrid, winning the gold medal for Saint Clare (Museo de Bellas Artes de Valencia, inv. 53), which convinced him to move to Madrid in order to further his career. Once there he received commissions for decorative schemes in the Portugalete and Fernán Núñez town palaces. A tireless and prolific artist, in 1875 Domingo Marqués decided that it would be advisable to move to Paris where genre painted was particularly appreciated. With the support of the art dealer Henri Haro he began to adapt to the commercial fashions of the day, soon becoming successful with his exquisitely painted, anecdotal scenes such as A Rest during the Hunt (MNP, P-004485). Domingo Marqués remained in Paris, enjoying an elevated financial and social position and continuing to receive important commissions from [1] Fernández Pardo (1998), p. 12. [2] Juberías (2019), p. 405.

Spain, including Portrait of Alfonso XII as a Boy (Patrimonio Nacional, Palacio Real de Madrid) of 1887, for which he was paid the very high sum of 100,000 pesetas.[1] His paintings, characterised by their sparkling light and sense of movement, also became extremely coveted by the leading American millionaires of the day such as Vanderbilt and Huntington.[2] In 1914 the artist’s comfortable financial situation allowed him to return to Spain, coinciding with the outbreak of World War I. It was at this period that he finally achieved the recognition that he greatly desired in his native country, being made an academician of the Academia de Bellas Artes de San Fernando in 1917. In 1918 Mariano Benlliure sculpted his bust which was installed in front of the Museo de Valencia and that same year he was awarded the Légion d’Honneur in France. Domingo Marqués died in Madrid in July 1920.

During his long career the artist came to be considered a follower of Francisco de Goya, to the extent that their work was on occasions confused. Domingo Marqués’ lively, sketchy pictorial technique and his ongoing interest in the effects of light led him to be considered the representative of the veta brava [bold and fiery manner] derived from Goya.[3] From an early age he copied his works, as noted above, and was also fascinated by the artist’s face, which he came to equate with the virtue of creative genius, an idea expressed in his oil on panel Genius, Valour and Beauty (fig. 4). [4] Domingo Marqués depicted Goya on numerous occasions in images that are all inspired by the portrait which Vicente López Portaña, another highly successful artist from Valencia, painted of Goya in 1826 during a rapid visit by the latter to Madrid from his exile in Bordeaux (MNP, P-000864). López’s portrait had been displayed in the Museo del Prado since 1828 where Domingo Marqués undoubtedly saw and copied it. This is the reference point for the present drawing, which reproduces the serious, concentrated expression on Goya’s face as he looks directly out at the viewer. It also includes the grey coat, waistcoat and cravat depicted in López’s image. For his drawing, which is characterised by a laudable vitality and psychological depth, Domingo Marqués used red chalk to enliven the face in contrast to the range of greys, whites and blacks which create both the background and Goya’s body. Despite its referential nature, this is the sketch that comes closest to conveying both Goya’s character and López’s painting. In other surviving drawings on the same subject by the artist the choice of gouache and white chalk, which gives Goya’s face a rather ghostly appearance (fig. 2), or the monochromatic use of red chalk (fig. 3) mean that both Goya’s features and the work that inspired the image are less overtly evoked whereas the expression of an idea or concept – the representation of artistic genius – becomes more evident.

[6] In this work the figure of Goya represents Genius, that of General Castaños, Duke of Bailén, Valour, and a Spanish dancer, Beauty.