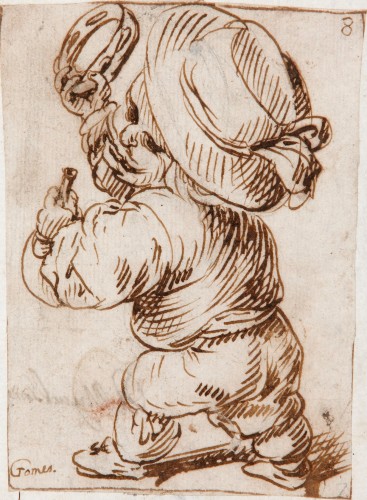 Dwarf with Bagpipes and Tambourine

Members of the Gómez de Valencia family were notable artists in Granada in the second half of the 17th century, of which the most important and the head of the family was Felipe. According to Palomino and Ceán Bermúdez, Felipe Gómez de Valencia was born in Granada in 1634. He trained there in the studio of the painter Miguel Jerónimo de Cieza, the most important local artist of the day. 1 Of his six children with Ana Camacho, Francisco also became a painter and on occasions his works have been confused with those of his father. Although Felipe must have been a prolific artist – as suggested by the large number of paintings recorded in the posthumous inventory of his studio – few have survived. Notable among surviving works are The Adoration of the Magi in the Hospital Real (1677) and The Lamentation over the Dead Christ in the Museo de Bellas Artes de Granada (1679), canvases that reveal his dependence on the work of Flemish artists known to him through prints and above, all, on that of Alonso Cano, the great innovator in Baroque painting in Granada. 2 Felipe’s premature death in 1679 cut short his promising career.

However, while few paintings by the artist survive, this is not the case with his drawings, of which a large group are known. They were first studied by Diego Angulo who followed Ceán Bermúdez in the latter’s Diccionario of 1800 in singling out their technical dependence on Alonso Cano, particularly with regard to the handling of the pen. 4 Angulo and subsequently Pérez Sánchez also correctly related them to the drawings by Antonio del Castillo, from whom Felipe also derived the use of a thick pen as well as the energetic lines and the manner of creating the shadows on the figures from diamond shaped hatching. With regard to the artist’s particular characteristics, these authors noted a certain dryness in the forms, the systematic avoidance of wash and the fact that most of them are signed and some even dedicated, suggesting that they were made as independent works to be given as gifts and not as preparatory studies for canvases. 5 Among the numerous examples of Felipe Gómez de Valencia’s drawings is The Temptation of Christ in the National Gallery, Washington (c. 1676: inv: 197.31.4), signed “Phe Gomes”; the Saint Agnes in the Biblioteca Nacional de España, signed “Gomez” (Inv. Dib/16/3/8); and the Head of an Old Man in the Museo del Prado (1675. Inv. D-5996), dedicated to a certain Francisco Ruiz.

All the above-mentioned characteristics are clearly evident in these two unpublished drawings. Both are executed in grey-brown ink applied with a pen which was very probably a reed pen to judge from the thickness of the strokes. The sheet has been previously prepared with a square border in ink, inside which there is an under-layer of sepia wash that creates an image closer to a print than a drawing. The first of the two images represents a grotesque dwarf with bagpipes and a tambourine. It is signed “Gomes” at the lower left corner and has the number “8” at the upper right corner. The second image has been described here as a dwarf dressed as a soldier given that the figure wears military costume of the day. Like the other image it is signed, while it also has the number “17” at the upper right.

The presence of the numbers is striking: the number 17 at the left and the number 8 at the right. This may suggest that the two drawings were part of a collection or were included in the same notebook or album. This suggestion seems to be confirmed if we bear in mind that a Study of two Heads in the Prado (inv. no. D-3793) has the same type of border as these two drawings and is numbered “68” at the upper right corner. 6 As with the above-mentioned Head of an old Man in the Prado, these two drawings reveal Felipe Gómez de Valencia’s interest in the study of human faces that undoubtedly derive from models by the Cordoban painter Antonio del Castillo.

Among the most notable feature of these two sheets, however, and the one that makes them unique within 17th-century Spanish drawing, is the fact that they are not preparatory studies for a painting but rather works conceived as independent images. Above all, however, these drawings are unique with regard to their subject matter of dwarves or grotesque, almost caricatural figures, and no other similar examples are known by Golden Age Spanish draughtsmen with the exception of Ribera. It is thus most likely that Felipe Gómez de Valencia was familiar with Italian caricatures, particularly those by Agostino Carracci and Francesco Villamena and that he also knew the prints of Jacques Callot (1592-1635), a French printmaker based in Italy. 7 This is revealed through a comparison of the present sheets with Callot’s prints of I Gobbi (Florence, 1616), which shows how Felipe Gómez de Valencia may have been inspired by Callot’s grotesque figures, mid-way between physically deformed individuals and characters from the Commedia dell’Arte. Both artists used a similar technique, suggesting that Felipe Gómez de Valencia may also have imitated this aspect of Callot’s work. The fact that Callot’s etchings used thick, highly defined lines that could easily be transferred to metal plates would also explain the rather dry, rigid quality of Gómez de Valencia’s drawings that has been criticised by experts.