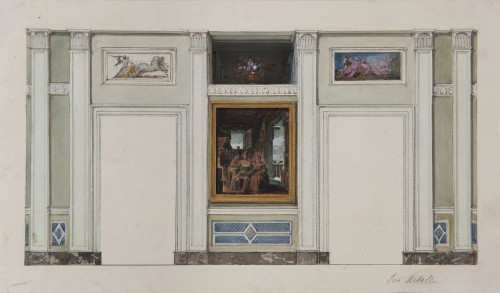 Born in Valencia on 20 May 1778, José Ribelles initially trained with his father, the painter of the same name. Having acquired the rudiments of the art he entered the Academia de San Carlos in Valencia where he studied with Vicente López. In 1798 he was awarded the Academia’s First Class prize and the following year moved to Madrid to continue his studies at the Real Academia de Bellas Artes de San Fernando. Very soon after his arrival he was awarded the second prize in the First Class category for his oil on canvas of The Continence of Scipio (Madrid, Real Academia de Bellas Artes de San Fernando). This success ensured his entry into Court circles and allowed him to meet artists of the stature of Goya, with whom he established good relations. During the French occupation of Spain, Ribelles entered the Masonic lodge of Santa Julia, becoming a Master. Following Ferdinand VII’s return to the throne this activity brought Ribelles before the Inquisition but he avoided punishment by freely admitting his membership of the Masons. In 1818, having rejoined official artistic circles, he was made an academician of San Fernando and through the mediation of the Infante Carlos María Isidro he became Deputy Director of the Academia’s drawing school for girls on calle Fuencarral, Madrid. That same year he petitioned the monarch for the position of Court Painter, obtaining this appointment on 16 February 1819. Ribelles was tirelessly active during these years, producing frescoes as well as drawings, set designs and oils. As a fresco painter he worked in the Royal Palace in Madrid and in Vista Alegre and for the Los Caños de Peral, de la Cruz and del Príncipe theatres. He died in Madrid on 16 March 1835.

This delightful drawing relates to Ribelles’ activities as a designer of interiors and can very probably be associated with the work he undertook for the royal palace of Vista Alegre. This suburban palace was built in 1825 as a recreational residence surrounded by gardens. It was soon after acquired by Queen María Cristina, who made significant alterations from 1833 onwards. In addition to Ribelles, other artists involved in its design and decoration included the architect Martín López Aguado and the painters José and Federico de Madrazo, Carlos Luis Ribera, Vicente López and Pharamond Blanchard. 2 The present design is a highly finished one for the elevation of a wall in a gallery in the palace. It has been conceived around the two doors that give entry into the room, located at each end of the wall. Slender Egyptian pilasters have been used in order to structure the space and make it more dynamic. The marked verticality of the pilasters if balanced by the wainscotting of geometrical motifs in the lower part and the broken frieze ornamented with palmettes of a Graeco-Roman type in the upper part. At each side and in the manner of over-doors are two horizontal scenes of classical subjects. The central section in the wall is occupied by a large painting that presides over the room with a trompe-l’oeil vase of flowers in perspective above it.

For his design Ribelles looked to the decoration of palaces in Spain during the reign of Charles IV. This drawing can be compared, for example, with the designs by François Grognard for the palace of the Duke and Duchess of Alba in Madrid (1790), those by Jean-Démosthène Dugourc for the Casita del Príncipe at El Escorial (1786), the ceiling paintings by Luis Japelli for the Casa del Labrador at Aranjuez (1795-1796), and the now lost decorations for the Palacete at Moncloa, Madrid. 3 All of them reflect the taste for the Egyptian, Etruscan and Graeco-Roman motifs that were extremely fashionable in Europe at this period, the rapid and widespread dissemination of which can partly be attributed to publications such as the Receuil d’antiquités by the comte de Caylus or the celebrated plates of Le Antichità di Ercolano Esposte. 4 In fact, the scene of Cupid on a chariot that appears in one of the over-doors in this design seems to be inspired by, if not directly derived from, one of the plates of the discoveries made at Pompeii and Herculaneum during the reign of Charles III of Spain when king of Naples.