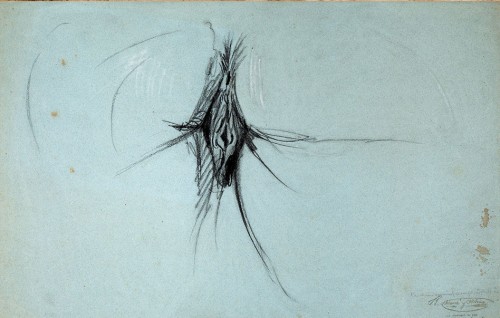 Gustave Courbet (1819-1877) was one of the most influential French painters of the 19th century. Considered the founder of Realism, he is in fact thought to have been the first to use that term following the opening of his exhibition which he termed the “Realist Pavilion” that ran parallel to the Paris Universal Exhibition of 1855.[1] His subjects from daily life and his naturalism, above all evident in his female nudes which depart from sculptural forms to favour more carnal ones, made Courbet a revolutionary painter and one who exercised an important influence on the artists of his generation. Among those to be profoundly inspired by Courbet was the Catalan Ramón Martí y Alsina. His godfather, who brought him up after after he was orphaned, was opposed to his artistic inclinations, for which reason Alsina was almost self-taught although he did attend the evening classes at the Escuela de la Lonja in Barcelona. From the outset he focused on nature as a direct source of inspiration for his works and his early output includes numerous landscapes and marine views. In 1848 Alsina went to Paris where he was able to see the works in the Louvre at first hand and also to meet Gustave Courbet, who would have an enormous influence on his career. From this point onwards his works reflect a desire to portray reality in a scrupulous and unidealised manner. He returned to Barcelona in 1850 but made numerous trips to Paris and Holland, producing a large number of landscapes, urban views and picturesque scenes of daily life. Alsina also depicted male, female and even child nudes, becoming professor of life drawing at the Escuela de la Lonja in Barcelona where he was appointed to a Chair of drawing in 1852. It is particularly in these nudes that a certain parallel with the work of Courbet is to be detected, specifically a comparable way of observing the female body in the sense that neither artist idealised their models or avoided poses and anatomical elements that had been largely passed over due to the morality of the academic tradition.[2] The same voluptuousness of the female form is thus evident in La Source by Courbet (Musée d’Orsay, inv. 1919) of 1868 and Martí y Alsina’s Nude Woman seen from behind (MNAC, inv. 206360-000) dating from around a decade later. Again, the same suggestion of the female body being offered to the viewer’s prying gaze is present in Courbet’s Sleeping

Even more striking, however, is the explicitness of both artists when depicting the female genitalia in some of their works. In The Origin of the World (fig. 1) Courbet depicted a woman who is anonymous, given that her face is outside the pictorial space. Her torso is partly covered by a white cloth to reveal one breast but the artist’s focus is on the explicit depiction of her external sexual organs, which are frankly presented to the viewer in an absolutely realist manner and with no historical, literary or mythological veiling. The realism and carnality of the scene is such that the viewer feels like a voyeur. That same daring when depicting previously forbidden parts of the body is evident in these two drawings by Martí y Alsina. While Courbet’s painting was not exhibited in public until the late 20th century, having prior to that passed through the hands of various owners who kept it as something hidden and almost “forbidden”,[1] it is possible that Martí y Alsina may have seen the work in the artist’s studio on one of his numerous trips to Paris and have been inspired by Courbet’s audaciousness.

The two drawings presented here are characterised by that same sensuality and desire to break away from convention in order to show every part of the human body. Nonetheless, in contrast to Courbet’s carnality Martí y Alsina’s agile charcoal strokes with light touches of white chalk convey the female sexual organs in a highly graphic way but also one that is so direct and employs such economy of means that the image almost seems to be an abstract composition of perspectivally receding lines. Unlike Courbet’s work, in which the feeling of looking at a scene to which we have not been invited is evident and can even make the viewer uncomfortable, here the directness of the sexual organs, which are shown as de-contextualised and frontally presented to the viewer’s gaze, means that we perceive the image more as the study of a part of the body and less as an intrusion on a woman’s privacy. On the other hand, what Courbet’s work and Martí y Alsina’s drawings do have in common is the fascination they provoke and their break with conventions, which Realism began to confront in a more direct way than the other artistic trends which constituted the immediate forerunners of modern art.