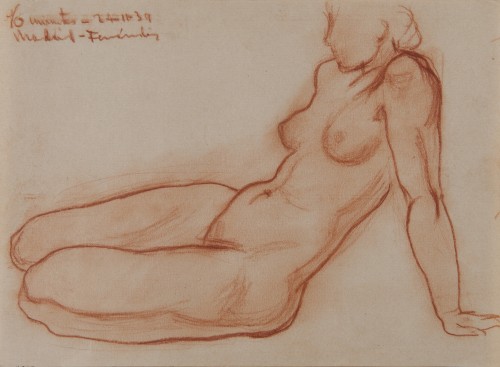 In September 1939 the Academia de Bellas Artes de San Fernando reopened its doors after the Spanish Civil War. For many years the Academia had been the second home to professors and students avid to immerse themselves in the world of art. Three years had passed since the military uprising of 18 July 1936 that had led on to the violence of combat, brought a halt to the activities of many and irreparably altered the fate of an entire country. Among those obliged to set aside their academic studies was Tomás Ferrándiz, a promising artist who worked in a wide range of art forms: sculpture, painting, drawing and even creative writing. Nonetheless, for Ferrándiz the war years were not totally lost ones given that he was intensely active during this period, as a result of which he matured as an artist and became receptive to new trends. The uprising had found him on his summer holidays in his native Alcoy where he was a regular participant in its most liberal circles such as the “Misunderstoods Club”, the members of which were writers and musicians. This affinity with revolutionary ideals led him to receive various commissions for posters in support of the Republican side. It could be said that the Spanish Civil War was one of the first examples of “total war” in which propaganda, and hence artists, played a key role.

Two facets of Ferrándiz’s activities were particularly notable during the war years. Firstly he undertook a significant body of work as a graphic illustrator, reflecting the pathos of the conflict, the suffering of civilians and the heroism of the combatants. In this field, which was entirely oriented towards propaganda, he made use of strikingly sculptural and volumetric figures, imbuing his works with an epic mood. Secondly, Ferrándiz was involved in the Spanish Pavilion for the International Exhibition in Paris in 1937, which was the largest and most comprehensive propaganda exercise undertaken by the Republic during the war. It benefited from the involvement of artists of the stature of Picasso, Miró, Julio González and Alberto Sánchez and was the venue for the first public display of Guernica. In the Pavilion Ferrándiz showed a drawing entitled Clamour of War, which was the central panel of a polyptych on which he had been working since the autumn of 1936 and which would be entitled The Spanish People defending Democracy. This piece is striking for its great technical merit, its classicising, academic mode, its monumentality and above all its almost sculptural nature. In the manner of a Greek frieze it illustrates the extremely difficult situation of the Spanish Republic at that time. While focusing on the heroic and on the epic nature of the combatants, it also conveyed the suffering of the soldiers and the bravery of their resistance. Ferrándiz’s artistic idiom, which combines Ingres-like classicism with sculptural volume, would be fully defined during the war years, a period that saw the emergence of a mature artist.

This maturity and fully established style is evident in the present drawing, executed in the period immediately after the war, in November 1939. Female Nude is a completely academic work of the type produced by the students of the Academia in their life classes, hence the annotation as to how long it took to produce. It reveals the pure essence of Ferrándiz’s style. The figure’s monumental, rotund and highly sculptural forms are comparable to the powerful nudes in Clamour of War.

The return to the Academia and the placid routine of classes must have been a gratifying experience for those who had passed through the horrors of the recent war. This resumption of academic exercises, to the gentle sketching of the female form in all its voluptuousness and sensuality, undoubtedly enabled Ferrándiz to return to normality. Nonetheless, the presence of the red chalk that defines the lines of the figure seems to evoke the blood spilled in the conflict. This bloodshed would continue to leave its mark on the artist’s life, like the lines of red chalk that covered the sheets of his drawings: a reminder of a horror experienced and never forgotten.

[1] Tomás Ferrándiz’s life and career have been almost forgotten for many years. The exhibition to be devoted to him at the José de la Mano Galería de Arte and the new catalogue raisonné of his work will help to bring us closer to an unknown artist. See: Clamor de Guerra. Esculturas y dibujos de Tomás Ferrándiz (1936-1939). Exhibition catalogue, Madrid, José de la Mano Galería de Arte, 2012.