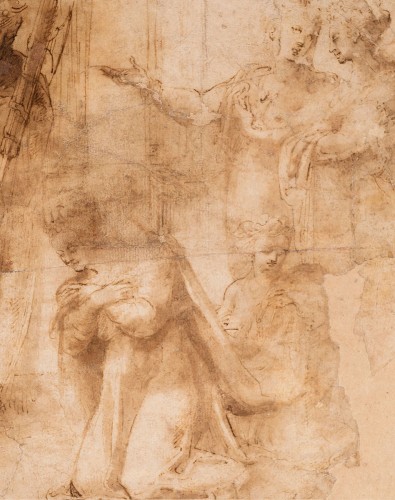 Four female figures and a male figure. Study for the death of the daughter of Jephthah

Luis de Vargas was the son of the little known painter Pedro de Vargas and of Aldonza Jiménez. Born in Seville around 1505, he learned the rudiments of painting from his father and is thought to have furthered his training with Diego de la Barrera. In 1527, aged around 21, Vargas went to Rome for the first time and is thought to have spent two periods there, from 1527 to 1534 and from 1555 to 1561.[1] These Italian trips were motivated by his desire to improve as an artist, in a possible echo of Francisco de Holanda’s opinion: “One thing they are notorious for in Spain and Portugal is that in neither Spain nor Portugal are they familiar with painting, nor do they do good painting or honour painting.”[2] It is thus logical that the more talented and ambitious painters did not confine themselves to studying in Spain and chose to go to Italy with the aim of assimilating both classical and modern art. Luis de Vargas could look to a lengthy tradition of painters who had done so, including Pedro de Berruguete, Fernando Yáñez de la Almedina, Pedro Machuca and Alonso de Berruguete, among others. It is thought that in 1543 Vargas started to work with Perino del Vaga on the fresco decoration of the pontifical apartments in the Castel Sant’Angelo,[3] having been a pupil of Perino’s from shortly after the time of his arrival in Italy. Pacheco states that “it is not known who his master was, some assuming that it was Perin de Vaga [sic].”[4] There is no conclusive proof of Vargas studying or working in Perino’s studio but the existence of some drawings by him that are copies of the latter’s compositions[5] and the parallels between some of his Sevilian works and those of the Italian painter and his collaborators on the pontifical frescoes would seem to demonstrate this connection.[6] What is certain is that Vargas’s technique in his drawings, with its energetic stroke, soft, undulating lines and effects of light modulated through very subtle washes all refer to the manner characteristic of

Perino’s circle, particularly Francesco Salviati.[1] This delicate technique of Italian origin is to be seen in the present sketch. It depicts a crowned woman kneeling in the foreground, her hands crossed at her breast. She is accompanied by another female figure in the middle-ground on the right who is also kneeling, and by two more standing women who seem to be watching the scene taking place. Finally the man on the left holding an axe offers the clue to identifying the action taking place in the drawing, which shows the moment prior to the principal female figure’s beheading.

Dr Escuredo, an expert on Vargas, has related this sheet to one in the British Museum (fig. 1) which was undoubtedly preparatory for a now lost fresco.[2] Typologically, the elegant figures in the two drawings are extremely comparable and have similar faces, for example the kneeling woman, and both employ very fine pen strokes and very subtle grey-brown washes to create hatching. The present drawing can be seen as a first version of the one in the British Museum, which is much more finished and is squared up for direct transfer to another support. The subject of that drawing was identified by Dr Mark Mcdonald as The Execution of Jephthah’s Daughter. [3] It includes an inscription on a cartellino held by a boy in the lower right corner, which reads: “fue Muerta/ Iezabel por ma/ dado de lehu [Jezabel was killed on the order of Jehu].” However, as Mcdonald noted, this identification of the scene as the death of Queen Jezabel is incorrect. Jezabel was killed when she was thrown out of a window on the orders of King Jehu whereas the drawing shows a queen about to be beheaded, an act witnessed by the king and his entire court. Jehu is sometimes referred to as Jephthah, who was also obliged to sacrifice a daughter as he promised Yahweh that if he were victorious over the Ammonites he would sacrifice the first being to come out of his house to meet him. That person was in fact his daughter. She accepted her fate but asked her father to grant her two months to “go up and down the mountains, and bewail my virginity, I and my fellows” (Judges 11, 29-40). Following her return she was executed, and while the Old Testament does not specify by what method she is often depicted as being beheaded.[4] The other women shown alongside the crowned, kneeling figure would thus be the friends who accompanied her during her last months.

Another possibility that has been suggested with regard to the subject of the two drawings and which again does not take into account the inscription on the British Museum sheet, is that they depict the martyrdom of Saint Catherine.[5] This is certainly plausible with regard to the depiction of the figures and their poses, particularly if the scene is compared to those on this subject by Bernardino Luini in San Maurizio al Monastero Maggiore in Milan and by Pordenone in the basilica of Santa Maria de Campagna in Piacenza (fig. 2). Whatever the iconography of these two drawings, it is quite evident that they are two of the most beautiful surviving drawings by Luis de Vargas, both perfectly revealing his assimilation of the figurative culture of mid-16th-century Rome.

[3] Huard (1835), p. 119. This is the earliest source to refer to Luis de Vargas’s involvement in the decoration of the Castel Sant’Angelo and also states that he was one of the most outstanding artists.