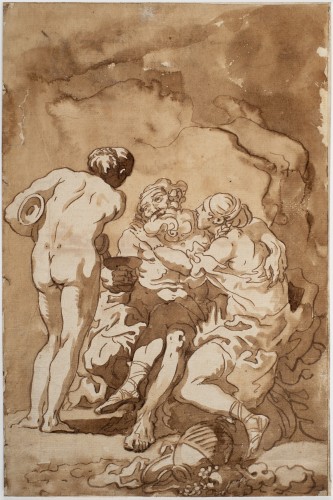 Lot made drunk by his Daughters

This drawing depicts the biblical episode narrated in Genesis (19: 31-35) in which Lot moved into a cave with his daughters following their escape from the destruction of Sodom. Unable to find men to continue their family line, the daughters made their father drunk in order to achieve this purpose. Lot is the male figure in the centre of the composition, holding a glass. His daughters are located on either side of him, one sitting next to him and attempting to seduce him and the other one standing, filling her father’s glass with wine from a pitcher in order to make him drunk. This subject was widely represented after the Council of Trent due to its markedly moralising nature and the potential that it offered artists to depict female nudes in sensual poses. Interest in this iconography declined in the 18th century but some artists, including Charles François de la Traverse – who worked in all the pictorial genres and who was noted for his “enormously fertile invention and great erudition in composition” 1 – offered his interpretation of this biblical episode.

Few details are known of Charles de la Traverse’s biography: he was born in Paris in 1726 and first trained with François Boucher (1703-1770). In 1748 he was awarded a grant to study in Rome, after which he went to Naples in order to see the discoveries being made at the archaeological excavations at Herculaneum. There he met the French ambassador in Naples, the Marquis D’Ossun.

The present work dates from shortly after the artist’s arrival in Spain, to where he followed the ambassador following the latter’s appointment to Madrid after the ascent to the Spanish throne in 1759 of the King of Naples, who became Charles III of Spain. Having arrived in Madrid, De la Traverse devoted his activities to teaching, with pupils who included Luis Paret y Alcázar (1746-1799). As in his own work, De la Traverse encouraged his students to make use of models taken both from antiquity and from life, which was contrary to the widespread practice of copying from prints. 2 This use of classical models as the starting point for drawings and prints is clearly evident in the present drawing, in which the depiction of one of Lot’s daughters reveals the influence of the Medici Venus, which became one of the most highly esteemed Hellenistic sculptures following its rediscovery in the 16th century (fig. 1). The figure is seen from behind, the spine slightly foreshortened and the weight of the body resting on one foot. The same sculpture had previously inspired the 17th-century painter Francesco Furini (1603-1646) for one of his figures in a canvas on the same subject (MNP, P-000144). Given as a gift from Ferdinand II, the Grand Duke of Tuscany, to Philip IV of Spain, it remained in the Buen Retiro until, at a date prior to 1772, it entered the studio of Andrés de la Calleja in the Royal Palace in Madrid where De la Traverse could have seen it. The composition of this present drawing also relates to that of Furini’s painting, based on three figures and devoid of any specific spatial references. Also repeated is the seated, profile pose of the daughter who caresses her father Lot as he grasps her around the shoulders. Nonetheless, despite its references to Furini’s composition, De la Traverse’s drawing has a markedly personal style due to the soft, zig-zagging lines and the contrasts of light produced by the judiciously distributed sepia ink washes. This distinctive and very recognisable style is to be found throughout the artist’s extensive output of drawings, which reveal a rigorous classical training and a use of sinuous lines and sepia washes that model the lights and shadows. Most of De la Traverse’s sketches have survived, constituting a corpus of seventy-eight in the Biblioteca Nacional de España. 3 Their technique and dimensions are almost identical to the present example. Within the group is a series on biblical subjects, including Joseph interpreting the Pharaoh’s Dream (304 x 199 cm, DIB 16/30/15), Moses on Mount Horeb (304 x 197 mm, DIB 16/30/16), and Hagar visited by the Angel (304 x 197 cm, DIB 16/30/13), all sheets with dimensions, compositional characteristics and techniques close to those of the present work.