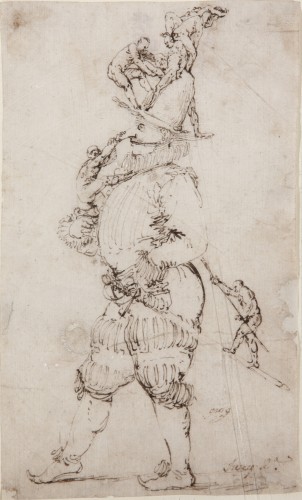 José de Ribera, known as El Españoleto, is one of the greatest figures within the history of art. Despite being considered a Spanish artist, a fact reinforced by his habitual signature, which includes a reference to his place of origin, his training and output can be considered fully Italian and should be interpreted as such. Aside from his activities as a painter, Ribera was one of the most exceptional draughtsmen in Europe in the 17th century. This is amply demonstrated by the more than 100 drawings by his hand that have survived to the present day and which have been carefully catalogued and studied by Walter Vitzthum and, above all, by Jonathan Brown. 1 Thanks to these scholars we are familiar not only with Ribera’s working practices but also with the fascinating world of quirky characters that arose from his imagination and which anticipates the 18th-century sensibility.

From a technical viewpoint, a number of influences have been suggested with regard to Ribera’s drawings. His contacts with Parma at the outset of his career immediately after he arrived in Italy explain the refinement of his drawings in pen, executed with delicate, light washes in grey and sepia tones. This technique is particularly evident in his most personal drawings of the type that were not conceived as preparatory studies for paintings but as autonomous works of art. Examples include the Emperor in the Uffizi (Florence). However, it would be in Rome that Ribera fully defined his technique, combining a study of the antique with the academicism of the Roman artists of the day. This explains his interest in analysing the human figure and its proportions and his study of expressions, which reached its height in his drawings for a series of anatomical engravings (1622). Also in Rome, Ribera learned how to compose his paintings on the basis of meticulous studies of details of a highly finished nature, the majority in black or red chalk. 2 Characteristic examples of this type are Saint Albert (British Museum, London) and Samson and Delilah (Museo de Bellas Artes, Cordoba).

In 1616 Ribera arrived in Naples possessed of this artistic background. From this date onwards his style would rapidly evolve and he gradually abandoned a type of highly finished drawing in pen or ink and moved towards increasingly free forms that deployed a rapid, loose line. This development is evident from the 1630s, at a time when his pictorial style moved towards more colouristic and dynamic forms. Dating from these years are masterpieces such as the preliminary sketch for the painting of Tityus (Museo del Prado) in the Gabinetto Nazionale delle Stampe, Rome (1632) and The Immaculate Conception (same collection), which is a study for the painting on that subject in the convent of the Agustinas in Salamanca, Spain (1635). The culmination of this process of artistic evolution is to be found in works from the 1640s in which the forms become blurred to the point of producing almost expressionist images, such as those in the complex drawing entitled Standing Figure next to a fallen Giant (Metropolitan Museum of Art, New York). 3

From the 1630s onwards Ribera produced a series of drawings on fantastical subjects, of which the present sheet is an example. They are autonomous sketches, conceived as independent works of art, in which his sensibility comes closer to that of 18th-century artists such as Goya. They are all executed in ink with agitated, zig-zag lines, on occasions with the addition of light washes applied with a brush. Also recurring are the figures: large-scale characters with little nude men climbing up them, playing with the giant without him seeming to notice. This is the subject of the present sheet, which depicts a gentleman dressed in the fashion of the day, concealed by a carnival mask that gives him a caricatural appearance. He wears a sword at his waist, up which a small figure perilously climbs. A second one attempts to climb along his nose while four more scramble onto his hat, stepping on each other. These little figures are to be seen in other drawings by Ribera such as Acrobats on a Rope (Real Academia de Bellas Artes de San Fernando, Madrid, inv. no. 2208), Grotesque Head with Figures (Museum of Fine Arts, Philadelphia, inv. no. 1984-56-8), and Man in a Toga with a small Figure on his Head (Metropolitan Museum of Art, New York, inv. no. 1981.395). In the latter, the diminutive figure waves a flag on which we read the name “Niccolò Simonelli” in Ribera’s own hand. Given that Simonelli was a 17th-century Roman art collector it has been assumed that drawings of this time, the exact meaning of which remains to be deciphered, may have been specifically executed for a private client as a gift or possibly as illustrations for a book. 4 The caricatural tone of the present drawing should also be related to the drawings of grotesque heads that Ribera produced as designs for prints at the outset of his career, as well as to a few drawings of around 1630 on similar subjects such as Bust of a Man with a Fantastical Headdress (Biblioteca Nacional de España, Madrid, inv. no. DIB/16/38/14) and Grotesque Scene or Scene of Torture (Museo Civico, Bassano del Grappa).