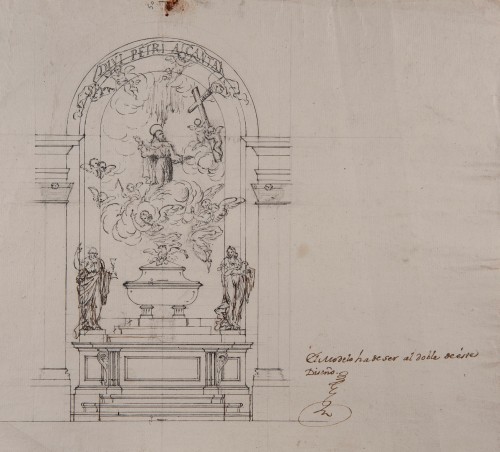 Francisco Gutiérrez Arribas was one of the leading Spanish sculptors of the 18th century. He began his training at the age of seventeen in the studio of Luis Salvador Carmona and in 1749 received a grant to study in Rome. The quality of the works that he sent back from Italy earned him membership of the Academia de San Fernando. In 1763 Gutiérrez Arribas returned to Spain and was commissioned to sculpt small ornamental elements for the new Royal Palace in Madrid such as the holy water stoups in the Royal Chapel. 1 Soon afterwards, in 1767, he was appointed Deputy Director of the Academia’s School. Having gained the confidence of the monarch, Charles III, and of his principal architect, Francisco Sabatini, Gutiérrez Arribas obtained one of the most important commissions to which he could hope to aspire, executing in marble and porphyry Sabatini’s design for The Tomb of Ferdinand VI in the church of the Salesas in Madrid. The majesty and combined richness and delicacy of the forms ensured his entry into Court circles. Together with his Cybele Fountain, a work that was left unfinished on his death (the lions were sculpted by Juan Pascual de Mena and Roberto Michel), this outstanding monument brought about a radical stylistic change in Spanish sculpture of this period.

Also important within Gutiérrez Arribas’s output were his religious sculptures. They include a Saint Anthony for the church of San Antonio de los Portugueses; the frieze of garlands and angels for the dome of the Encarnación; the reliefs of Hope and Charity for San Isidro el Real; and the sculptures of Saint Elijah and Saint Theresa commissioned by the community of nuns of the convent of las Maravillas. Still more important, however, is the high altar for the Sanctuary of Saint Peter of Alcántara in Arenas de San Pedro (Ávila). The present drawing is a study for that work. It offers a relatively close representation of the monument’s appearance, reflected in the fact that the inscription on it notes that the model has to be “double the size of this design.”

Saint Peter of Alcántara was canonised on 9 May 1670 and it was decided to erect a sanctuary in his name on the site where he had built his last monastery. In the 18th century, and having been declared a Royal Religious Foundation by Charles III, in 1771 it was decided to enlarge and improve it. The king granted 200,000 reales for the realisation of the work and members of the Court also made donations. The enlarged complex was inaugurated in 1775 and one year later, on 16 September 1776, its chapel was consecrated by the bishop of Salamanca, José Zorrilla. 3

The chapel designed by Ventura Rodríguez is of circular form and is entirely clad in marble. Eighteen Corinthian marble pilasters with bronze bases support the cornice, from which rises a hemispherical dome. The chapel has three altars. The high altar occupies the entire end wall and houses a stucco high relief by Gutiérrez Arribas of 6.5 metres high by 3 wide depicting Saint Peter of Alcántara ascending to heaven. The saint is born up by angels on a throne of clouds, contemplating a cross held up in the sky by a group of small angels in the upper part of the composition. The altar terminates at the top with a semicircular banderole with the words: “ET ERIT SEPULCHRUM EIUS GLORIOSUM”. In the lower part, on the level of the altar table and attached to the wall, is an urn with relics of the saint. Made in different marbles and bronze, it is flanked on either side by two alabaster statues of Faith and Charity. The altar was paid for in 1773 by the duque del Infantado, as recorded on a bronze plaque at the foot of the relief. 4

The design of the altar is thus close to the one seen in the present sketch by Gutiérrez Arribas although there are certain modifications with regard to the words on the banderole and other small details. Differing from the final inscription, on the drawing are the words: SEPV DIVI PETRI ALCANTA[RA] VSI. In addition, there are more angels in different poses in the final work while the cross at the top of the relief is no longer on the level of the saint, as in the drawing, but is above his head. Nonetheless, the drawing is relatively close to the finished altarpiece. Almost as soon as it was completed it was reproduced in an engraving by Manuel Salvador Carmona (Madrid, Biblioteca Nacional, inv. no. 13053), a work paid for by the duque de Medinaceli.