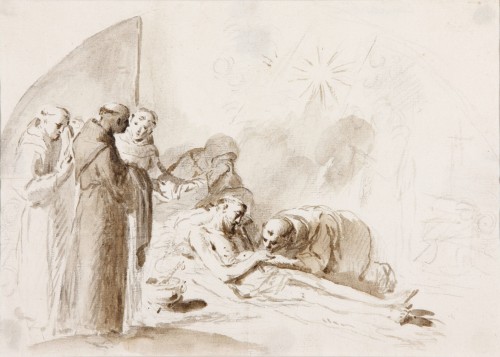 Ferdinand VII married María Isabel de Braganza, his second wife, on 29 September 1816. Some months before, and in relation with this event, the monarch had ordered the redecoration of the apartments for the new queen in the Royal Palace in Madrid. He commissioned the designs from the Chief Palace Architect, Isidro González Velázquez, and from his First Court Painter, Vicente López. 1 The room that received the most attention was the Dressing Room, for which a series of six over-doors in grisaille were produced in the style of trompe l’oeil low reliefs. From the surviving correspondence between the painter and the King’s Chief Steward, Duke of San Carlos, we know that the commission dated from the January of that year and that that iconographic programme was devised by Vicente López. 2 The intention of this programme was to glorify the monarchs, their virtues and their dedication to the promotion of Catholicism and to the unity of the Spanish empire. The paintings were thus to depict “events of the Monarchy […] that merit recording as they are of no less merit than our earlier ones or those from Mythology”. 3 The events depicted were also to harmonise with the ceiling painted in 1763 by Antonio González Velázquez, which depicted Christopher Columbus presenting the New World to the Catholic Kings.

Vicente López was also responsible for selecting the painters to carry out this commission, all of whom were associated with the court. He thus turned to Francisco de Goya, Zacarías González Velázquez and José Camarón y Meliá, artists who had remained in service from the reign of the previous monarch. 4 López himself also participated in the execution of the project, as did José Aparicio who represented the new generation of artists of the day. As a result, Zacarías González Velázquez painted The Union of Granada with Castile; Camarón was responsible for Isabel the Catholic takes off her Jewels in order to give them to Christopher Columbus; Aparicio painted The Spanish Monarchy crowned by the Virtues; Goya depicted The Charity of Saint Elizabeth of Portugal; 5 and López painted the last two works in the series, The Baptism of Saint Hermenegildo by Saint Leandro and Saint Hermenegildo surprised by his Father’s Soldiers. All these works are still to be seen in the Royal Palace in Madrid.

The present, unpublished drawing is a preparatory study for the canvas of Isabel the Catholic takes off her Jewels in order to give them to Christopher Columbus and can thus be securely attributed to José Camarón y Meliá. In addition, it can be dated to the first months of 1816. Executed in black chalk with lead white highlights, it depicts Isabel the Catholic and is particularly interesting as it reveals various differences in relation to the final canvas (PN, Inv. 10023676). The Queen is depicted seated on a throne ornamented with a lion’s head and legs. Her feet rest on a stool while on her right is an orb that to which she points with her left hand. This element was replaced in the final painting by the parchment that Columbus shows the Queen. Her left hand is the least defined element in the drawing, indicating the way that the artist considered different positions for this element. Lightly sketched in with some faint chalk and lead white lines below her right hand is the small dish on which the Queen is placing a pearl necklace.

Despite its apparent simplicity this is an extremely beautiful drawing. Making full use of the qualities of the paper and its blue tone, Camarón deploys the black chalk to maximum effect. He uses it to sketch the figure, placing most emphasis on the study of the drapery, which is extremely volumetric. By this point Camarón undoubtedly had the final grisaille painting in mind, which had to express pseudo-sculptural qualities. As a result he alternated rapid lines on the face and hands with incisive ones that define the volumes and shadows. This effect of volume is achieved by smudging the chalk and combining it with the white lead, which is applied with light strokes. The latter was a useful material given that the white tone stood out particularly well against the blue of the paper.

As a source of inspiration for his canvas it would seem that Camarón turned to a literary text, the History of the New World by Juan Bautista Muñoz (Madrid, 1793). The painting conforms closely to Muñoz’s account of this episode, in which the Queen offered her jewels in order to finance Columbus’s expedition to the New World and in which an angel supposedly appeared to the Queen to “lend enough for the expedition to be commanded without loss of time”. 6 Camarón’s work thus depicts a moment earlier than the one depicted in the fresco on the principal ceiling, which shows Christopher Columbus presenting the New World to the Catholic Kings by González Velázquez.

José Camarón y Meliá was born in Segorbe in 1760, the son of the renowned printmaker José Camarón Bonanat. He trained at the Escuela de Bellas Artes de San Carlos in Valencia and subsequently travelled to Rome. After his return to Spain he was appointed Court Painter to Charles IV, Director of Painting at the Royal Porcelain Manufactory and finally, Deputy Director of the Academia de Bellas Artes de San Fernando, of which he subsequently became Honorary Director. Despite his important career and prominent position, the exact date of Camarón’s death is unknown.

[4] Some of the leading painters of the reign of Charles IV had died during the early years of the 19th century, including Antonio Carnicero (in 1807) and Joaquín Inza (in 1811). Others, such as Mariano Salvador Maella, were passed over for royal commissions due to their supposed collaboration with the government of the invader Joseph Bonaparte. Aside from those artists, the two most important painters of the day, Antonio de Ribera and José de Madrazo, were in Rome painting for the exiled Charles IV. See Martínez Cuesta, Juan, “Francisco de Goya y la decoración del Tocador de la reina doña María Isabel Francisca de Braganza” in Reales Sitios, no. 128, Madrid, 1996, pp. 51-52.