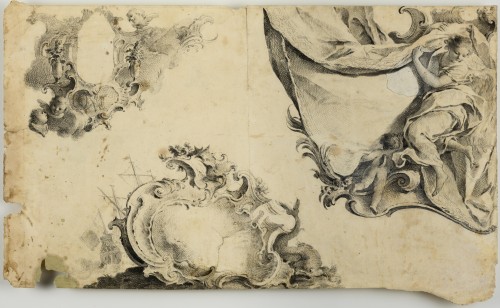 Rocaille can be defined as asymmetrical decoration that imitates the forms of shells. This exuberant, excessive, undulating motif was widely used during the 18th century, giving its name to the Rococo style. It is used here in the present drawing by José Camarón Bonanat for his depiction of the sea and was applied by him to the borders of decoration in other works. The artist was one of the leading Valencian painters of the second half of the 18th century and a representative of the Spanish Rococo style, together with Antonio Carnicero (1748-1814) and Luis Paret y Alcázar (1746-1799).

Camarón achieved renown not just as a painter but also as a printmaker and illustrator. He trained in Valencia and Madrid, attending classes at the Academia de San Fernando in the latter city then returned to Valencia in 1754 where he was one of the founders of the Academia de San Carlos in 1768, becoming its director of painting and overall director from 1796 to 1801. Despite his academic posts, Camarón was a highly prolific artist who made use of a range of genres and techniques. Notable within his oeuvre is an important corpus of religious works consisting of twenty altarpieces painted for Valencia cathedral between 1781 and 1783 and a series of canvases for San Francisco el Grande in Madrid of 1788-1789. 1 A large number of drawings by the artist have survived, the majority produced as designs for prints. Among his most celebrated series of illustrations are those for the Vida, excelencias y muerte del gloriosísimo Patriarca San José and the thirty-one designs that he made for the prints for José Pellicer’s edition of Don Quixote. 2

The present drawing is among the many by the artist intended for prints, in this case depicting decorative cartouches to surround and embellish a map of the Archbishopric of Valencia. Executed in fine lines of black chalk and reed pen with black ink, Camarón precisely defined a series of clearly Rococo elements to be used to frame the texts that would appear on the map. In the 16th and 17th centuries use was generally made in Spain of maps from Venice, Flanders and Paris, translated into Spanish. However, in the second half of the 18th century a local tradition of mapmaking arose, and it is in this context that the Map of the Archbishopric of Valencia can be seen. Produced in 1761, the cartographer was Tomàs Vilanova while the printer was Hipòlit Ricarte. 3 It depicts both the diocese of Valencia and that of Segorbe and includes the area of Vilafermosa that belonged to Valencia until 1960 (fig. 1). Also marked out on the map is the projected new bishopric for the city of Xátiva, which aimed to obtain this ecclesiastical status.

The map is notably rich and ornate in style due to the presence of Camarón’s decorative motifs and rocaille work. In the upper left corner, a triangular shield richly decorated with rocaille, vases of flowers, clouds and the heads of small angels, surrounds an image of the Virgin enthroned with the Christ Child. In the opposite corner an angel with sinuous forms appears in the sky, holding up an elaborate curtain to reveal the map’s principal inscription. Finally, at the lower centre is a large area of rocaille decoration suggesting a giant wave, behind which are a caravel and a sea monster. This decorative surround frames the map’s explanatory notes and the indication of scale. The present drawing is a study for these exquisite decorative motifs, with the difference that the drawing lacks the texts and the image of the Virgin, indicating that the artist received precise instructions when producing his design. The map’s elegant, sumptuous appearance is strikingly different to that of another map made a year later in 1762 by Tomàs López de Vargas Machuca in which all efforts are concentrated on the precision of the cartographic symbols and the shoreline, omitting any decoration or flourishes and thus coming closer to the approach of modern map-making. 4

The reverse of the present sheet has a series of sketches for what appear to be bookplates, in the form of small cartouches with a name inside. Some are allegories of Literature and Painting, thus indicating the profession or interest of the person for whom the bookplate was made. In addition, on one side of the sheet are two small scenes taking place in a sword shop. Both images depict the same subject but with the position of the principal figures changed from the left to the right. Camarón depicts the sword-makers tempering the blades and another figure who has weighed them and is hanging them up for sale in the shop window. Particularly striking is the marked contrast between the crisp, exquisitely detailed style of the drawings for the Map of Valencia and the disordered, synthetic and sketchy nature of these images.