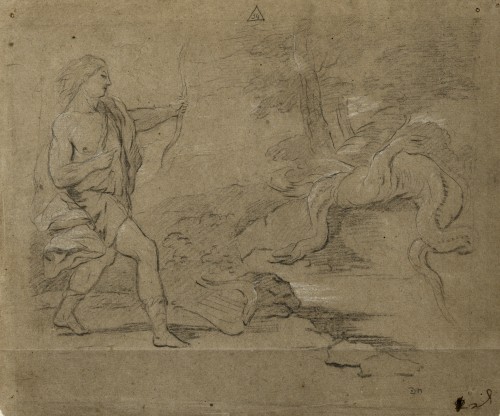 In 1756 Corrado Giaquinto designated a series of artists to draw and copy various works by Giordano for the creation of tapestries to decorate the Royal Palace in Madrid. Among those chosen for this undertaking was the painter José del Castillo. 1 Castillo had been Giaquinto’s student in Rome between 1751 and 1753 while he was studying there with a grant from the Academia de San Fernando in Madrid. His initial contact with Giordano’s work would prove decisive and he subsequently became so familiar with the Neapolitan artist’s models that he became one of his best “imitators.” 2 In 1777 Castillo made renewed contact with Giordano when he was entrusted with the restoration of one of the frescoes in the Casón del Buen Retiro, a project for which he was paid 9,000 reales de vellón for “retouching and going over the fresco painting in the Casón of this Royal Residence.” 3 Castillo not only restored the ceiling but also copied the nine Labours of Hercules that hung on the walls of that room (Real Academia de Bellas Artes de San Fernando, inv. nos. 1127 to 1135). This endeavour and the prints after those works allow them to be known, given that the originals are now lost.

In addition to these documented works, José del Castillo also executed other studies of works by Giordano, possibly as personal study exercises or as models for tapestries. 4 At least two of these studies are exact copies of the works that had decorated the Chamber of Charles II in the Royal Palace of Aranjuez, a project executed by Giordano around 1697. 5 The iconography of that group of canvases was intended to exalt the origins of the world and fertility, an irony for the bedroom of a monarch who died without heirs. The decoration of this room was dismantled, possibly during the reign of Philip V, but the canvases that comprised it were kept at Aranjuez until the division of Charles III’s estate. 6 They included two over-doors depicting Deucalion and Pyrrha and Apollo killing the Pythian Serpent. The two episodes (both recounted by Ovid in his Metamorphoses) are related as they recount Apollo’s victory over the beast after the flood that devastated the Earth (Metamorphoses, 435-450), from which only Deucalion and Pyrrha survived (fig. 1, Metamorphoses, 310-415). Castillo copied the two canvases on sheets of ochre-coloured laid paper, using strokes of black chalk to firmly define the figures and other softer, more diffused ones for the landscape, finally adding a few white chalk highlights. This technique corresponds to the one used by the artist’s early drawings, for which reason the present work could date from after his return from Italy, when he worked at Aranjuez with Giaquinto and was entrusted with copying Giordano’s works as models for tapestries. The mythological episode unfolds from left to right: Apollo appears first, standing and in profile, holding his bow in his left hand and making a gesture with his right that indicates that he has just shot the arrow that has mortally wounded the Pythian Serpent, which lies dead, resembling a dragon rather than a snake. On the ground between the figure of the god and the monster is a lyre, an attribute closely linked to Apollo and which allows for his definite identification.

Castillo’s drawing of Deucalion and Pyrrha literally copies Giordano’s canvas (Patrimonio Nacional, inv. no. 10022576), 7 and it can be assumed that the same is the case for Apollo killing the Pythian Serpent, but in that case the oil no longer survives. It is last referred to in the will of Charles III, as noted above. As with the Labours of Hercules, José del Castillo’s drawing thus provides a record of a lost work by Giordano, through which it is possible to reconstruct a room that the latter designed with a complete decorative and iconographic programme. As a result, this sketch is not only important in artistic terms, documenting Castillo’s early activity at court and revealing his skills at copying, but also has great art-historical value.