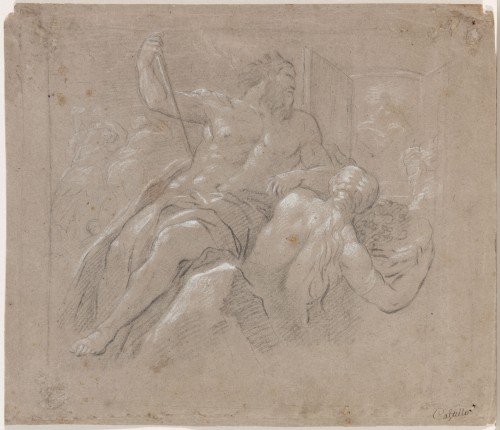 José del Castillo was born in Madrid in 1737. He began his training at the age of just ten in the drawing classes of the Preparatory Section of the San Fernando Academy in Madrid, directed by José Romeo. Castillo was soon noticed for his abilities and in 1751 he received a grant from José Carvajal y Lancaster to study in Rome with Corrado Giaquinto (1703-1766), returning to Spain in 1753. Having returned to Madrid the young Castillo continued his studies in drawing and in 1755 entered the triennial competition at the Academy, winning the first prize and a gold medal. in December 1758 he was awarded a further grant from the Academy to travel to Rome, where he remained until 1764, studying with Francisco Preciado de la Vega (1712-1789). This is the period of the “Italian Sketchbooks” (1761-1762, Madrid, Museo Nacional del Prado), in which Castillo reveals himself as one of the finest draughtsmen of the day.

Having completed his training, Castillo applied for work at Court and was employed at the Royal Santa Barbara Tapestry Manufactory where he joined the team of painters led by Giaquinto that was producing designs for the decoration of the royal palace at El Pardo. Castillo worked alongside Andrés de la Calleja, Guillermo L’Anglois, Antonio González Velázquez and Francisco de Goya, among others. From then on Castillo’s career was less successful and he obtained few commissions outside of the Tapestry Manufactory. For the Manufactory, however, he executed notably important works including cartoons for the hangings in the King’s bedroom in the royal palace in Madrid (1770-1773), the new tapestries for the Prince’s Chamber at El Escorial in 1773, and those for the Cabinet of the Princess at both El Pardo and El Escorial (1775-1776).

Alongside his work as a tapestry designer, Castillo undertook other projects such as the restoration of the frescoes by Luca Giordano in the Casón del Buen Retiro, Madrid (in collaboration with Andrés de la Calleja), and the illustration, with Antonio Carnicero and Pedro Antonio Arnal, of Ibarra’s edition of Don Quixote (published by the Real Academia de la Lengua). In the late 1780s Castillo experienced serious financial difficulties. Despite having been made an Academician in 1785, he was not appointed Royal Painter, possibly because his works lacked, “harmony in the colours […], observation of optics and perspective, and […] contrast in the groups and figures” as Ceán Bermúdez noted 1. Nonetheless, in 1787 the Count of Floridablanca commissioned from the artist the ceiling paintings of his Madrid residence, a project he undertook jointly with Gregorio Ferro. For this commission, Castillo painted a series of decorative compositions in the Pompeiian style with allegorical and mythological figures. Towards the end of his life Castillo oversaw the remodelling of the church of Santos Justos y Pastor in Madrid, painting a scene of Saints Justus and Pastor led to Martyrdom for the main altarpiece. This is now lost but is known from the preliminary oil sketch in the Museo Lázaro Galdiano, Madrid. Castillo died in poverty on 5 October 1793. 2

The composition of the present drawing, executed in black chalk with touches of white lead, exactly repeats the painting of Deucalion and Pyrrha by Luca Giordano (Patrimonio Nacional, inv. no. 10022576) painted around 1697 for the Chamber of Charles II at the royal palace of Aranjuez. 3 Castillo must have copied it when it was still in the palace, as according to the inventory of the palace undertaken in 1794 in relation to the Will of Charles III, the canvas was hanging at that date in the corridor between the Pieza del Cubierto and the Antechamber. 4 Castillo’s use of designs and models by Giordano is well known. Under the supervision of Corrado Giaquinto he had drawn copies of works by Giordano to be used as tapestry designs for the decoration of the new royal palace in Madrid. 5 In addition, he had worked on the restoration of Giordano’s frescoes in the Casón del Buen Retiro from 1777 onwards. 6 Castillo not only restored the ceiling, but also copied and engraved the series of paintings on the Labours of Hercules (Madrid, Real Academia de Bellas Artes de San Fernando), and the paintings in the building’s vestibule, all now lost.

With regard to the iconography of the present scene, Deucalion and Pyrrha were considered to be the founders of the new generation of human beings following the classical Flood. In this scene, recounted by Ovid in the Metamorphoses (Book I), having survived the flood brought about by the gods as a punishment of the human race, Deucalion and Pyrrha made their way to the temple of Themis in order to find out how to redeem mankind. Moved by their actions, the goddess made the following pronouncement: “Depart from my temple, veil your heads, loosen the girdles of your garments and throw behind you the bones of your great mother.” Deucalion interpreted these words as meaning the stones to be found in the earth, after which they “went down the hillside, veiled their heads, loosened their tunics, and threw the stones behind them, as they had been bidden […] The stones began to lose their hardness and rigidity, and after a little, grew soft. […] and in a brief space of time, thanks to the divine will of the gods, the stones thrown from male hands took the appearance of men, while from those the woman threw, women were recreated.” 7 The present drawing reproduces both passages: on the right we see Deucalion and Pyrrha walking towards the steps of the temple of Themis, whose glowing form appears in the background behind the gates. On the left, the couple obey the Oracle and throw the stones behind them, from which the new generation of man starts to emerge.

In his Philosofia secreta (Madrid, 1585), Juan Pérez de Moya explained the symbolic meaning of this myth: “All this signifies that Deucalion and Pyrrha brought men out of caves like stones and took them to the flat plains; and having brought them they encouraged them to multiply the human race of that region, giving them free licence to act, without any rules or any reward for chastity, as if there were no shame in it. In other words, the story makes it clear that there are lazy, hard men and women like stones when it comes to virtuous behaviour, not subject to anything except their own will.”