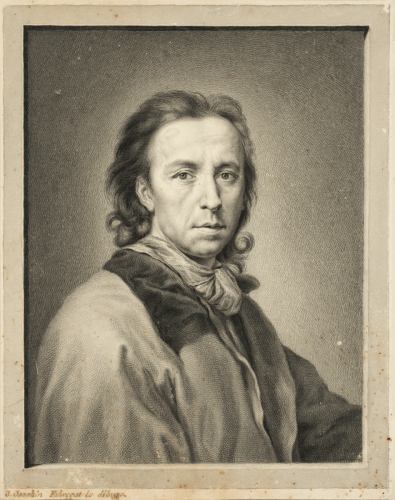 In 1761 Anton Raphael Mengs, by then a fully established artist, was made court painter to Charles III of Spain and was summoned to live and work in Madrid. From that moment onwards his influence on Spanish art would be a decisive one, not only on artists such as Francisco Bayeu, Mariano Salvador Maella and Francisco de Goya, but also on his friends who were collectors, among them Bernardo de Irirate whom he helped to acquire important works on the Madrid art market. This explains how Iriarte assembled an outstanding collection in his house on calle Leganitos in Madrid which included works by Van Dyck, Murillo, Giordano, Coello, Titian and Velázquez, among others. Nonetheless, despite the importance of the paintings in his collection, Iriarte considered his greatest treasure to be the Self-portrait which Mengs had gifted him in 1775 (fig. 1). In the words of Iriarte’s poem: “Es de mi sala el principal ornato / Del Sabio Mengs el célebre retrato: / Inestimable don de este grande hombre, / Que con aquel pincel tan arrogante / Conque en Europa eternizó su nombre, / También ha eternizado su semblante; / Y al paso que a sí mismo se ha igualado / En su copia, a sí mismo se ha excedido.”[1] Mengs possibly gave the painting to Iriarte in thanks for the role the latter had played from his position in the Secretariat of State in the court case which Mengs brought against his step-mother Anna Katharina Nützschner.[2]   Proud of the collection he had assembled, Iriarte was delighted to show his house to visitors and travellers. It is from one of these visits that we know that in 1798 Mengs’s painting was in the house on calle de la Cruzada to where Iriarte moved to live with his wife after the death of his brothers: “The octagonal room houses a portrait of Mengs painted by himself.”[3] The collection was also open to artists who wished to study its works and makes sketches of them, and once again Mengs’s Self-portrait was among those that attracted most attention. Manuel Salvador Carmona, for example, asked Iriarte for permission to borrow it to make a print after it, returning it in the autumn of 1778 before he left for Rome to marry Mengs’s daughter, the painter Anna Maria Mengs. Carmona produced a drawing[4] and a subsequent print that was used in 1780 to [1] “[The principal adornment of my gallery is the celebrated portrait by the Learned Mengs/ Inestimable gift from this great man/ Who with that bold brush/ With which he immortalised his name in Europe/ Has also immortalised his appearance;/ And in equalling himself/ In his copy he has in fact exceeded himself.]” Poem included in Colección de obras en verso y prosa de D. Tomás de Yriarte, published in Madrid in 1787, in Jordán de Urríes (2007), p. 262. [2] Roettgen (1999), vol. 1, pp.351-353, no. 284. [3] Cruz y Bahamonde (1812), t. X, p. 570. [4] Manuel Salvador Carmona, Anton Raphael Mengs, según el autorretrato de la colección Iriarte, 1778. BNE, sign. DIB/18/1/7174.

illustrate the frontispiece of Obras de d. Antonio Rafael Mengs,[1] while following Anna Maria’s move to Madrid she produced two pastels after it, one of them now in the Museo del Prado (fig. 2).

Again in relation to Iriarte’s collection being available for visiting and study, between 1775 and 1781 the engraver and draughstman José Joaquín Fabregat copied Mengs’s Self-portrait in the form of a magnificent drawing which he presented at the Academia de San Carlos in Valencia in order to made an academician of merit. In the words of the Secretary of the Academia de San Carlos in Valencia: “I have presented the documentation offered by don Joaquín Fabregat, a student of this Academy and at this time an Academician of the Royal [Academy] of San Fernando, in its category of Engraving of Plates, comprising a group of prints engraved by himself, and a drawing of the Portrait which Don Rafael Antonio Mengs painted of himself: all of which the said Fabregat sends from Madrid and presents to this Academy of San Carlos; so that if the Committee acknowledges sufficient merit in the said works he will be considered worthy of being conceded the rank of Academician of merit of this [Academy].”[2] The application was successful and Fabregat was duly made an Academician.

Fabregat studied at the Academia de San Carlos in Valencia until 1769 when he applied to be admitted to the Academia de San Fernando in Madrid. There he was awarded a prize in the engraving competition of 1772 and two years later was made a supernumerary academician with the presentation of his print of Saint Philip Neri based on a drawing by Mariano Salvador Maella after Robert Michel’s sculpture. As noted, in 1781 he was made an academician of merit at the Valencia Academy in recognition of his activities as a printmaker and skills as a draughtsman and in 1787 he applied for the position of director of printmaking at the Academia de San Carlos in Mexico City. He was appointed to the post in 1788 and travelled to Mexico where he embarked on his activities as professor of printmaking. From that point onwards Fabregat produced a large number of prints of Mexico City, including the Geometrical Plan of Mexico City of 1791[3] and The Main Square, Mexico City of 1797.[4]

Fabregat’s drawing of Mengs’s Self-portrait reveals him to be a consummate draughtsman who succeeded in depicting the subject of the painting with absolute fidelity. Small details such as the vein running down the right side of his forehead and the wart on that side of the nose are reproduced in precise detail. The handling of the black chalk, in which the cross-hatching of different degrees of thickness and intensity models the forms of the face, clothes and background, is truly sublime and also indicates that the artist may have considered producing a print after this drawing as it provided him with the technical basis to do so. The scarcity of drawings by Fabregat makes this work all the more exceptional while also clearly revealing his enormous abilities in this medium.