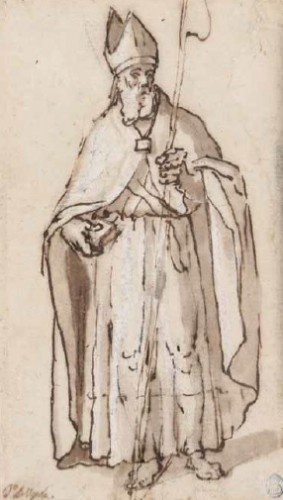 This is the only drawing that has been assigned to the Andalusian Mannerist painter and polychromist Juan de Uceda, an attribution made possible by the presence of the signature at the lower left corner. Uceda was born into a family of Sevillian artists, probably around 1570. His first known work dates from 1593 when he collaborated on the pictorial decoration of the Easter Thursday monument in the cathedral in that city. 1 Uceda’s first known canvas is The Transition of Saint Hermenegild, now in the Museo de Bellas Artes de Sevilla (inv. no. DO0138P) of 1602, for which he painted the figures of the angels at the top of the composition following the departure of Alonso Vázquez (1564-1608), who had started the painting, for South America. 2 This fact suggests the Uceda could have studied with Vázquez, thus assimilating from him the Mannerist forms that characterise his few known works.

In the first decade of the 17th century Uceda’s commissions brought him into contact with leading artists in Seville, such as the painter Francisco Pacheco and the sculptor Juan Martínez Montañés. Nonetheless, the fierce competition that prevailed in the city at that time, which made it difficult to secure important commissions, meant that in 1608 the artist left for South America, for the city of Lima in order to head “the altarpiece paintings workshop”. 3 In January 1610 he was, however, once again in Seville where he was contracted with Montañés to execute the Altarpiece of Saint John the Baptist for the convent of Santa María del Socorro, for which Uceda was to polychrome the structure of the work and the sculptures. 4 The static forms of his figures and their Mannerist colours, which were already out of date by the second decade of the 17th century, meant that Uceda was obliged to diversify his activities and focus more on polychromy than on painting canvases. Despite this, he achieved renown in Seville and in 1616 was appointed joint chief overseer of the guild of painters with Francisco Pacheco, examining artists of the stature of Velázquez and Francisco de Herrera. 5

The present drawing depicts a standing Bishop Saint holding a book against his waist in his right hand and a pennant in his left. The body is frontally positioned while the head, with a thick beard and wearing a mitre, is slightly turned to the right. The saint wears a heavy cope that falls over his back with almost no suggestion of movement. However, the vestment beneath it is almost transparent in the lower part and thus reveals the figure’s legs, indicating that the artist copied from life when executing his models.

This sketch is created with firm lines in pen and brown ink and light washes that emphasise the figure’s volumes and the shadow that it casts on the ground. In some points the artist has made use of white chalk to produce highlights. By employing all these resources Uceda has created a notably three-dimensional figure that seems to be closer to a sketch for a sculpture than a painting. As noted, the artist was also active as a polychromist of altarpieces and although he did not produce the sculptures himself he could have supplied the designs for some of the figures, which were then sub-contracted to other sculptors. 6 However, the saint’s closed, restrained form and its slightly static pose relates it to some of the artist’s known paintings, such as The Virgin of the Rosary in the Museo de Bellas Artes de Sevilla (fig. 1, inv. no. DJ1433P) and the Saint Joseph in The Holy Family (fig. 2, Museo de Bellas Artes de Sevilla, inv. no. CE0139P). In the case of the latter figure, its closed, weighty form as well as the position of the cloak falling over the shoulders and resting on one of the arms is an almost direct transposition of the present drawing. In addition, the type of male face is very similar in both cases. The relationship that can thus be established between the present drawing and that oil on canvas, which the artist signed and dated in 1623, allows the present drawing to be dated to that period, in which Juan de Uceda primarily focused on the polychromy of sculptures and altarpieces.