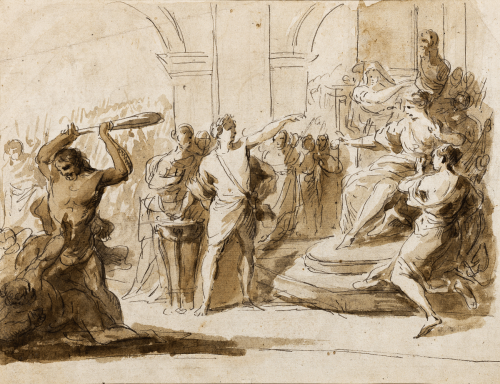 On 19 March 1808, following the entry of the French troops into Spain, the Prince of Asturias, Fernando de Borbón, overthrew his father Charles IV and proclaimed himself King of Spain as Ferdinand VII. His victory was, however, short-lived as he was summoned to Bayonne by the Emperor Napoleon and forced to renounce the throne, which was given to Napoleon’s brother Joseph Bonaparte (José I of Spain). Spaniards considered their legitimate monarch to have been taken from them and that they were in the hands of an invading force. It was in this context that just a few days later the War of Independence against the French broke out in Madrid, while politicians and artists promoted the idea of an empty throne that could only be occupied by the legitimate ruler, Ferdinand VII, establishing the idea of the return of “El rey deseado” (the longed-for king).   One of the artists whose work championed the legitimacy of Ferdinand’s rule and denounced the French usurpation was the Toledan painter Juan Gálvez. Having initially trained at the School of Drawing of the Casa de la Caridad, a charitable foundation in his native city, in 1787 he enrolled at the Real Academia de Bellas Artes de San Fernando in Madrid. Gálvez was awarded two prizes while at the Academia: a 2nd class medal in 1793 and a 1st class one in 1799, prizes that established his reputation as a painter. His early works were decorative projects for interiors; between 1793 and 1801 he worked with Charles IV’s court decorators while from 1801 to 1807 he was associated with the court painter Juan de Mata Duque, with whom he produced important mural schemes for both the Crown and the nobility.[1] Following the outbreak of the War of Independence, in 1808 Gálvez went to Zaragoza with the painter Fernando Brambilla where he produced a number of preparatory drawings for the series of engravings entitled The Ruins of Zaragoza. These images celebrate the heroic individuals who had fought against the French, including Casta Álvarez (fig. 1, BNE, sig. ER/3199(4)), Agustina de Aragón (BNE, sig. ER/3199(6)) and Jorge Ibor y Casamayor (BNE, sig. IH/4429/1/1); the damage and destruction of the city’s monuments caused by the Napoleonic troops, such as the print Ruins of the Seminary (BNE, sig. ER/3199(18)); and some of the battles that had taken place, such as Las Heras (BNE, sig. ER/3199(12)) or Calle del Coso (BNE, sig. ER/3199(9)). The complete series was published in Cadiz where both Brambilla and Gálvez and his family lived until the end of the war.[2] In order to produce the series the

two artists asked the Academia de Cádiz to finance it, arguing that its aim was to “transmit to posterity examples of virtue and heroism and encourage men to their worthy imitation.”[1]

During his time in Cadiz Gálvez must have been active in the decoration of the residences of the nobility who had fled to the city and settled there.[2] We also know that he applied for the vacant post of director of painting at the Academia there. On 21 December 1811 it was decided to open the position to public competition and that both locals and outsiders could participate. Ten rules were compiled in order to ensure the transparency of the process and it was stipulated that the entry piece had to be an oil painting on a historical subject which candidates were given six months to complete.[3] Five painters took part in the competition: Juan Gálvez, Manuel Rocca, Juan Rodríguez “El Panadero”, Antonio Melcar and José García Chicano, and the specified subject for the work was “Spain, oppressed by despotism and about to be delivered to the tyrant, takes heart when Patriotism swears to defend her by facing all dangers.”[4] The paintings and drawings by the candidates were exhibited on 1 August 1812 and on 3 August it was announced that the position was awarded to Manuel Rocca.[5]

The enormous effort that Gálvez put into his entry is evident in the numerous surviving preparatory drawings. The two presented here are the initial sketches in which the artist worked out the iconographically complex theme. Both include the architectural setting, which is a monumental, classical one with a stepped podium on which the throne is located. The more rapidly drawn sketch which reflects the artist’s initial idea, executed in pen and grey-brown ink with agitated strokes, is followed by the more highly elaborated one in which there are a larger number of figures, executed in a combination of pen and grey-brown ink with washes of varying intensity employed to create a more pictorial image. This second drawing already includes a number of elements present in the subsequent, more meditated designs, such as the bust of Ferdinand VII over the throne, on which a personification of Spain is seated; the inclusion of Hercules, here as a physical presence but later evoked through the two columns that refer to the “Plus Ultra”; and the figure of a heroic combatant, shown semi-nude and wearing a laurel wreath, who personifies the people fighting for the return of their true king. Subsequent to these two sketches is the drawing in the Museo de Bellas Artes de Córdoba (fig. 2, inv. no. E0924D) which presents a much more refined idea close to the final one.[6] It is also in pen with washes of grey and grey-brown ink but it is more defined and more complex in terms of the setting. In the Córdoba drawing the throne of Spain is located on a high stepped podium and is shown as empty, albeit with the bust of Ferdinand VII above it as the symbol of its rightful occupier. Flanking it are two thick columns that refer to those of Hercules and are one of the principal symbols of Spain. The throne is threatened by a figure standing in front of it, with his arm extended and wearing a crown. He undoubtedly represents Joseph Bonaparte who wished to illegitimately sieze the throne. In the face of this threat the mature woman located to the left of the throne and representing Spain supports the male figure wearing the laurel wreath who represents the people fighting to reinstate their legitimate monarch. There is one more drawing on this subject in the Biblioteca Nacional de España (fig. 3, sig. DIB/15/11/11). This is the final modellino, as evident in the fact that it is squared up in order to transfer it to canvas and in the fact that it is the same image as the one in the oil study for the final painting. Both the Córdoba drawing and the one in the Biblioteca Nacional have previously been attributed to the artist Rafael Tegeo (1798-1856) based on cataloguing by Ángel Barcia of 1906 which made used of an erroneous inscription at the lower left of the drawing in the Biblioteca Nacional which reads “Dibujo original de Rafael Tegeo” [Original drawing by Rafael Tegeo].[7] Barcia identified the subject of both that drawing and the one in Cordóba as a “Symbolic composition referring to the first Carlist War”, even though there is no information to suggest that Tegeo ever depicted a subject of that type. However, in 2008 the publication by Dr Díez of a small oil painting executed with a technique entirely characteristic of Juan Gálvez (fig. 4, Private collection) and identical to the drawing in the Biblioteca Nacional dispelled any doubts about the attribution of the work and its subject.[8] Both were removed from Tegeo’s oeuvre in the detailed study undertaken for the monographic exhibition on the painter held at the Museo del Romanticismo (Madrid) in 2018 where they were correctly attributed to Juan Gálvez.[9] With regard to the final canvas which the artist painted in the competition for the post of director of painting at the Academia de Bellas Artes de Cádiz, this was last seen on public display in the Historical and Artistic Exhibition of the Centenary of the 2nd of May held in Madrid in 1908.[10] It was at that date owned by the antiques dealer Miguel Borondo but all trace of it subsequently disappeared.

In 1814, after the War of Independence ended, the support Gálvez had shown to Ferdinand VII earned him the rank of academician of merit, the most distinguished title an artist could receive, and a year later Ferdinand appointed him his court painter, a post Gálvez held until 1835.

[1] It is believed that he was one of the artists who worked on the decorative wall paintings in Godoy’s palace. See Jordán de Urríes (2020).

[5] Information on the competition is recorded in the books of minutes housed in the Archive of the Academia de Bellas Artes de Cádiz. See Contento (1993), vol. I, pp. 220-221.

[7]  The painting was on display at the Museo de Cádiz but then disappeared from it and there are no surviving photographs.

[12] With thanks to Dr. Rafael Contento for this information.