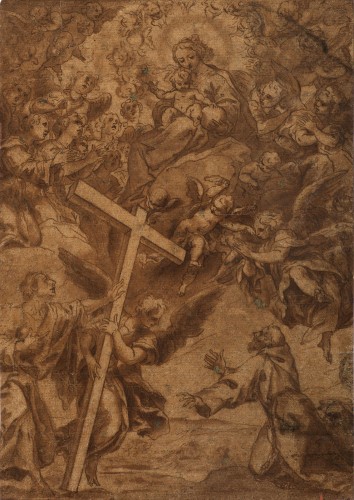 Although born in Madrid in 1632, 1 the artist Juan Niño de Guevara is considered one of the most important artists of the 17th century in Malaga. 2 While still a young child he moved with his family to that city and at the age of just twelve he signed an apprenticeship contract with the painter of Flemish origins Miguel Manrique for a term of three years, from 1644 to 1647. 3 After that date it is not clear if he went to Madrid and there entered the studio of Alonso Cano or if the two artists’ paths crossed in Granada 4 in 1652 when Cano was commissioned to paint The Virgin of the Rosary. 5 What is certain is that Niño de Guevara was profoundly influenced by Cano’s art and radically modified his own manner of painting, becoming his closest follower to the point that the attribution of some works is still debated between the two artists. 6 Niño de Guevara not only derived his manner of painting from Cano but also the typology of his figures, the physical model of his Virgins and the compositional structures, all of which he used for the creation of his own works. This is fully evident in the present drawing.

This sketch depicts The Apparition of the Virgin and Child to Saint Francis and the Vision of the Cross, thus combining two episodes from the life of Saint Francis in a single image. Firstly, it depicts the vision of the cross, which took place in the church of San Damiano in Foligno, and secondly, the apparition of the Virgin and Child. Both miraculous events took place before Francis decided to renounce his worldly life and dedicate himself to the service of God. Despite the complicated task of combining two different episodes in a single scene, Niño de Guevara successfully achieves a comprehensible reading, masterfully managing the proportions and orthogonals and creating a triangle between the three principal elements (the cross, the Virgin and Saint Francis) which steers the viewer’s gaze from one to the other in rigorous order. Both the Virgin’s face and the compositional structure as well as the typology of the angels can be traced to various works by Alonso Cano. These include the drawing of The Apparition of the Virgin to Saint Felix of Cantalice (Museo Nacional del Prado, D000071), in which the physical model of the Virgin is the same and the setting is closely comparable, and The Annunciation (fig. 1, Museo Nacional del Prado, D003819), which makes use of the same physical type for both the Archangel and the Virgin.

The technique employed by the artist for this drawing also resembles that to be seen in some of Alonso Cano’s numerous works on paper. The overall composition is established in pen, with vigorous, defined strokes that perfectly outline the figures. The artist then applied washes of grey-brown ink of different intensities; more diluted for the faces and more intense for the folds of the clothing and the angels’ wings, thus creating volume and modelling the areas of light and shade. This same technique is also to be found in the above-mentioned Annunciation by Cano (see fig. 1) and is again present in the few drawings securely attributed to Niño de Guevara. 7 They include The Virgin and Child with Angels (fig. 2, Museo Nacional del Prado, D005982), which also reveals the confident definition of the forms of the figures and the use of washes of varying intensity to create the setting. 8

Finally, no canvas on this subject by Niño de Guevara is known, but Ceán Bermúdez records that for the monastery of San Francisco in Malaga the artist executed: “The paintings for the high altar and the paintings for the chapel of the Third Order.” 9 It can be assumed that those works would have depicted episodes from the life of Saint Francis, for which reason the present drawing could have been a preparatory study for one of the scenes. Sadly, those paintings are now lost and it is thus not possible to securely demonstrate that the present sheet corresponded to one of the works for that commission.